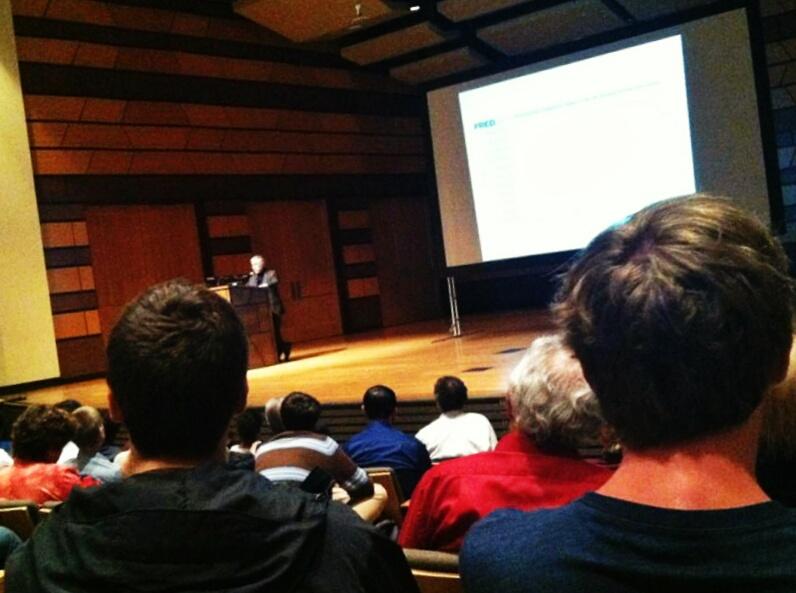 Crowded in the University Center for the Arts, community members, students and Colorado State University faculty filled the auditorium, waiting to listen to visitor and speaker Paul Krugman.

The event was sponsored by CSU Department of Economics, CSU Office of International Programs and Macmillan Publishers.

Krugman argued that the demise of European countries is a result of their shared currency, rather than their welfare systems. He used both current and historical statistics to support his arguments.

“If it really is about welfare states, then we’d think countries with big governments would be in trouble…” Krugman said. “However, we see that this relationship isn’t true. Greece has done poorly, Sweden has done well, and France hasn’t actually done that badly … They actually look better than Denmark.”

Krugman emphasized the point that European countries have done some things well.

“Countries can be extremely good at something but very bad at other things …” Krugman said. “The big thing that the Europeans did wrong was not their welfare system but it turns out to be adopting a common currency.”

Jorgen Rasmussen, a junior studying economics, said that he agreed with Krugman’s ideas.

“Maybe I disagreed on a minor point here or there, but his views are very similar to mine,” Rasmussen said. “I most strongly agree with the idea that no country got it all right.”

This perspective was reiterated throughout Krugman’s speech.

“The U.S. certainly isn’t in a position where we shouldn’t learn from other countries, but we also shouldn’t idealize them,” Krugman said. “We should learn what we can, what’s good.”

Senior economics major Christopher Keyes said that he benefited from the presentation and was honored to have Krugman speak at the university.

“I’ve read so much of his stuff,” Keyes said. “I’ve read his work in the Times and in Rolling Stone. I’ve even had to use his textbooks in my introductory econ classes.”

Rasmussen said that he was pleased with the turn out and believes that CSU students need to be more exposed to influential people like Krugman.

“I think that CSU needed this,” Rasmussen said. “As an economics major, I’ve come to see that not all problems are blatantly obvious. Issues that we think are issues aren’t. This lecture really reaffirmed that for me.”