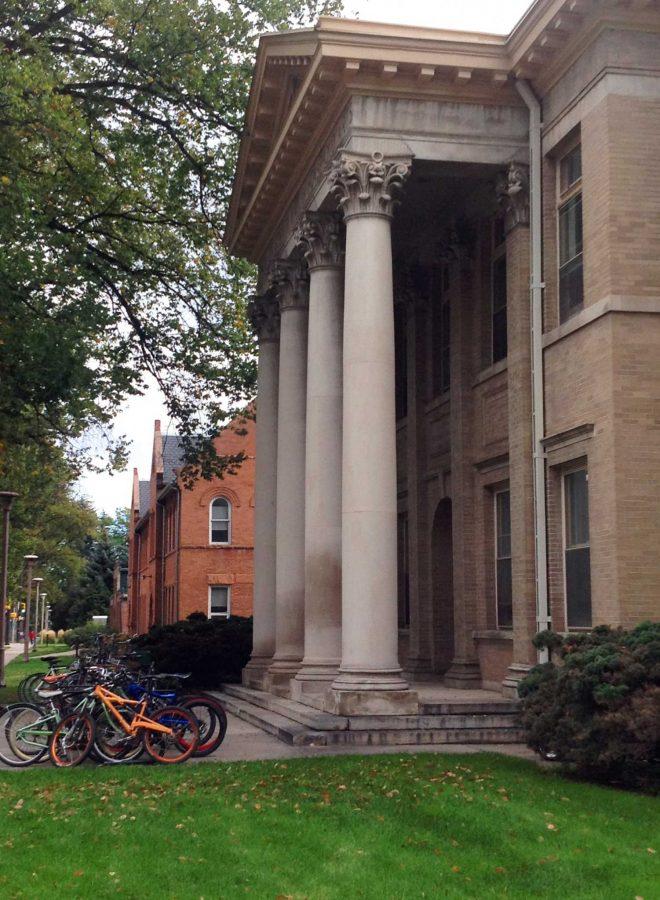 Imagine attending college with only four other students. This was the case for the first class of the Colorado Agricultural College in 1879, which was later named Colorado State College of Agriculture and Mechanic Arts in 1935. Today, we know it as Colorado State University.

Early in its founding, the Colorado Agricultural College offered classes in horticulture and farm economy, as well as subjects including arithmetic and English. Initially, the college only had two faculty members.

Since that time, CSU has expanded the campus to include eight colleges and 55 academic departments. Now, CSU boasts over 30,000 total students and 1,600 faculty members.

It is easy to forget how small CSU once was. Here is a glimpse of campus history.
The Oval

The Oval was created in 1909 as a center-point of the campus to connect main buildings. It appears that the Administration Building is slightly visible in the background of this 1926 photograph. It also slows that the Oval was once rather bare. Rumor has it that couples would walk through the Oval for good luck in marriage. Instead of holding archery lessons in the Oval, students today often utilize this space to play Frisbee or take a quick nap between classes.
Glenn Morris Field House

This 88-year-old building was once simply called the Men’s Gym. Although the building often appears vacant today, it was once a popular spot on campus. After World War II, this building served as additional dormitory space due to the increase in enrollment. Also known as the South College Gym, this building hosted dances, and class registration took place here until 1990. The building was named after athlete Glenn Morris, who played for the CSU track and football teams and won gold in the Decathlon in the 1936 Berlin Olympics.

The 1925 photograph of the Glenn Morris Field House shows vehicles lining College Avenue and what appears to be trolly tracks cutting through the middle.
Lory Student Center Plaza

The Plaza witnessed some modest changes since 1975. Archive photographs indicate that a street previously ran through the Plaza. It appears that at the time of the photograph, the Plaza did not yet have the legendary stump where outspoken individuals have been known to give literal stump speeches. Today, the Plaza is not simply a route to class; religious preachers and non-profit organization workers often talk to students in this area.
Lory Student Center

After the recent renovations, the student center food court is now unrecognizable. Named after former CSU president Charles A. Lory, the student center was completed in 1962 as a replacement of the original student center, now Johnson Hall. At the time of this undated photograph, the food court included Hardee’s, Passport International Fare and Cultivations Soups & Salads. Today’s lunch offerings are not too different; the food court holds Carl’s Jr. and Spoons, among other restaurants.
Student Services

Hartshorn Health Center was named after Duane Hartshorn, a CSU athlete in 1921 who played football and basketball. Construction of the health center took place in the spring of 1963. Since its completion, archive photographs indicate that the interior has hardly changed.
Guggenheim Hall

The exterior of Guggenheim Hall still features the large Corinthian columns. The red building next door was once an industrial science building, but today is used for construction studies. Guggenheim Hall was once a home economics building where students supposedly tested high altitude baking. Bike racks are now in front of Guggenheim Hall, but perhaps the most noticeable change is the view of Laurel Street. Not far down the street resides the Rams Bookstore and Pizza Casbah.
Sigma Phi Epsilon

The Sigma Phi Epsilon house seen in these photographs is not even the original location. The previous house sat at the current location of the Safeway parking lot on College Avenue. Sigma Phi Epsilon moved to the Lake Street location, formerly the house of Lambda Chi, in 1933. Sigma Phi Epsilon alumni include Kenneth Monfort, whom Monfort Quadrangle is named after. Sigma Phi Epsilon was active for nearly 100 years and was once the oldest standing fraternities at CSU. However, the fraternity lost recognition from the university during the spring 2014 semester.
Morgan Library

These photographs demonstrate a stark change in Morgan Library’s façade. Previously, the front of Morgan Library displayed a water fountain. More recently, a ram sculpture resided in that location. Today, it is the site of the Study Cube. Originally, the college’s first library was a reading room in Old Main. Later, the library resided off of the Oval in a building later used for music and the current location of the Institute for Higher Learning and Teaching (TILT). Morgan Library was completed in 1964 and expanded in the 1990s. The library experienced significant flood damage in 1997.
Eddy Hall

Eddy Hall will soon be unrecognizable after renovations are finished. This 1997 photograph of the back of Eddy Hall shows the historic flood that impacted CSU. Today, markers dot campus signifying flood water levels. Eddy Hall was built in 1963 as part of William Morgan’s emphasis on expanding humanities. The building is named after philosophy professor Willard Eddy, who started the honors program at CSU.
Chemistry

Collegian Interactive News Team member Katie Schmidt can be reached at socialmedia@collegian.com or on Twitter @KatieDSchmidt.