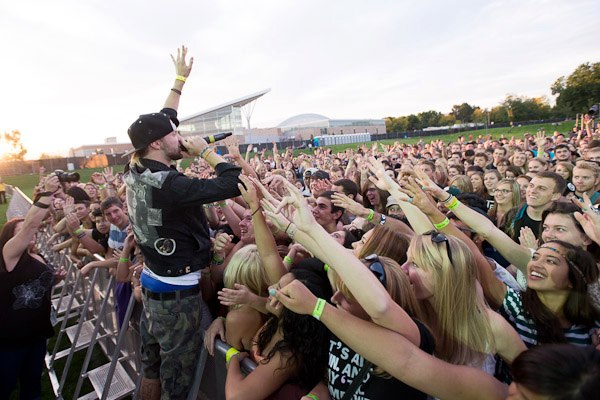 The annual fall concert is Friday, and Nico & Vinz and Mike Posner are performing this year. In honor of the upcoming show, here is a look back at some artists that have headlined the fall concerts at Colorado State University in the past.

Rapper Lupe Fiasco, also known by his birth name Wasalu Muhammad Jaco, performed alongside Three 6 Mafia, also known as Juicy J and those other guys nobody knows, at Moby arena in 2008. Lupe Fiasco performed in early October of that year and the concert was paid for through a student fee increase which added up to a total $110,000. Needless to say, the fee increase was a bit of a fiasco.

CSU continued its trend of hiring Dirty South rappers for its fall concert when Ludacris performed at the Moby Arena in 2009. The concert sold out after tickets were on sale for only five days. Hopefully Ludacris didn’t run into traffic on the way to the concert, because we all know how much he hates going the speed limit.

Like Ludacris, B.o.B started his career in Atlanta. He then reportedly put on a headband and took an airplane through some strange clouds to get to CSU to perform in 2011. Sean Kingston, the Jamaican American responsible for your middle school dance soundtrack, opened for B.o.B.

Cobra Starship made good Rams go bad in 2012. They performed alongside Colorado natives Breathe Carolina on the intramural fields in September that year.

Norwegian pop stars Nico & Vinz are headlining the fall concert this year. Opener Mike Posner has collaborated with artists like Pharrell Williams, Wiz Khalifa and Big Sean. Nico & Vinz have seen significant success in Europe, even performing at the Nobel Peace Prize ceremony last year. Despite their success overseas, some students say there is Norway they are going to the concert this year.

Collegian City Beat Reporter Danny Bishop can be reached at news@collegian.com or on Twitter @DannyDBishop