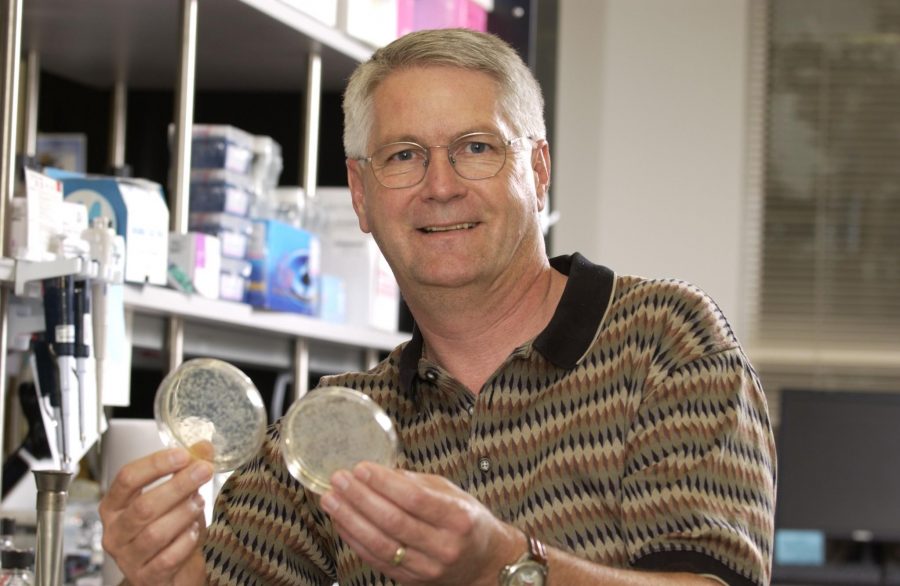 Herbert P. Schweizer is researching bacteria to find a way to increase the threats of bioterrorism.

Colorado State University researchers are leading studies to find the cure to a potential biothreat bacteria which can cause dangerous infections in patients. In May, signs of growth were detected in bacteria samples that were supposed to be inactive.

The bacteria, Burkholderia pseudomallei, is being researched in a biosafety level three laboratory. Two of the 20 samples sent out to a lower lab last May showed signs of growth.

Lab researchers at CSU have been working on B. Pseudomallei research recently in response to it being a CDC listed bioterrorism threat.

“Pretty much anything can be a biothreat, it just depends on how you define it,” said Herbert Schweizer, a researcher involved in the study of the bacteria. “Spring of 2013, the United Kingdom government declared antimicrobial resistance as severe as a threat as bioterrorism agents. If we are losing the battle with antibiotic problem bacteria, that becomes a threat to patients and to society.”

The incident report that documented the event with the samples had many details redacted. According to Robert Ellis, the CSU biosafety director who wrote the report, the blacked-out items on the report were details that CSU and CSU’s attorneys did not think should be accessible through Colorado public records.

“Based on past experience that all samples prepared and tested this way over the last 6-plus years had been sterile, DNA samples were presumed to be sterile,” the incident report stated.

There is still uncertainty as to how the incident happened.

“We have kicked around all kinds of things. It just doesn’t make sense that it wasn’t absolutely sterile,” Ellis said.

B. pseudomallei is a bacterium commonly found in tropical and subtropical regions of the world, usually in water and soil. The bacteria can cause severe infections in certain exposed patients.

“This is a bacterium that is very difficult to diagnose because it has so many diverse systems,” Schweizer said. “It causes a multifaceted disease that ranges from respiratory distress, pneumonia, bone infections, nervous system infections and all kinds of infections. We don’t really know what directs one infection over another in diverse patients.”

According to Schweizer, this bacteria had upwards of a 50 percent mortality rate in some areas where no treatment was available. It has a high resistance to antibiotics that makes few treatments possible.

“The anxiety is that if the bacterium were to develop resistance to those few antibiotics that we have that we have available, then we would be kind of screwed,” Schweizer said. “What are you going to do?”

Workers who deal with the bacteria have to be cleared by the federal government. According to Schweizer, the high containment laboratory CSU uses for this research protects both the researchers and the environment.

“This is biosafety level three bacteria,” Schweizer said. “There are different levels of biosafety and for bacteria. That is the highest level [at CSU].”

“Whenever you are working with bacteria, with infectious agents, obviously there are strict procedures that we have to adhere to,” Schweizer said. “Sometimes we have incidents.”

Schweizer’s main interest of study is using the ability bacteria has to resist current antibiotics to assist in the development of more effective antibiotics.

“It is intrinsically resistant to many antibiotics, so it is very different to treat,” Schweizer said.

Intrinsically resistant bacteria can acquire a genetic element from another bacteria that controls resistance from within the bacteria.

CSU researchers take this incident as a way to improve their department.

“You can be assured that we have an outstanding biosafety program here at CSU,” Ellis said. “The researchers are following the programs, following the protocols correctly. It doesn’t matter how good a program is, you are going to have a mishap every once in a while … We are constantly trying to improve the problem when something like this happens.”

Collegian Science and Technology Beat Reporter Stephanie Mason can be reached at news@collegian.com or on Twitter at @stephersmason.