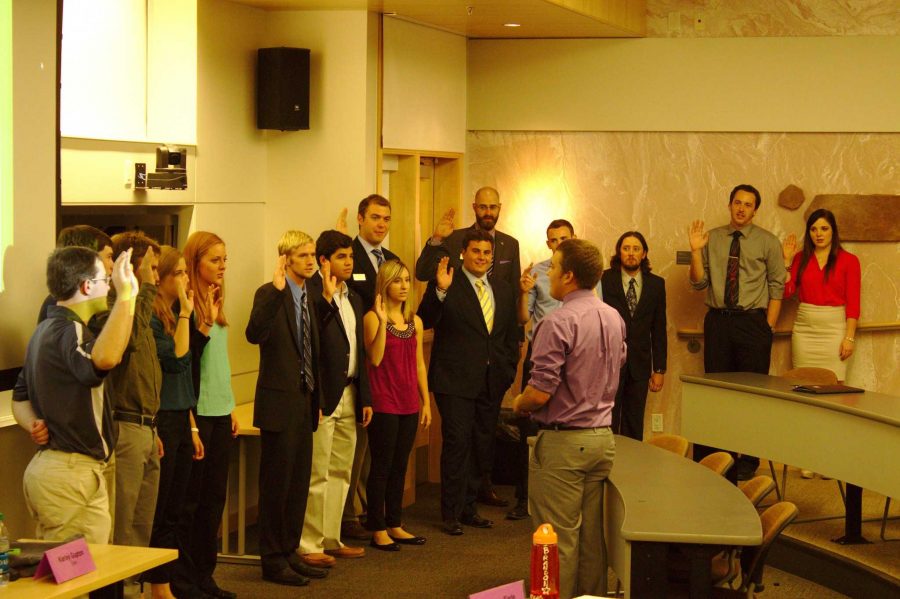 The newest members of the Student Fee Review Board are sworn in at ASCSU Senate meeting in the Behavioral Science Building Wednesday night. (Photo credit: Jonathan Matheny)

This year’s Student Fee Review Board was sworn in during the Associated Students of Colorado State University Senate meeting Wednesday night.

The nominees were hand selected by Lance LiPuma, ASCSU vice president.  They were presented to the senate Wednesday night for discussion, voting and swearing in.

The discussion became heated when several senators expressed discomfort about the nominees. Senators stressed the need for SFRB to listen to the student body when making financial decisions.

“I don’t see any advocates of the students,” said ASCSU Senator Kwon Yearby.

Yearby’s discomfort was echoed by several other senators.

“Where are the mechanisms to bring student opinion in?” asked Senator Jason Sydoriak.

While some senators were in agreement with Sydoriak’s concerns, they were met with opposition from ASCSU members who expressed concern that a board that only listens to the student body would prevent progress at CSU.

“We will get into a stagnant state where we’re not moving toward a future,” said Will Maher, ASCSU interim director of student services.

Senators also discussed the importance of continuing funding for construction in order for CSU to maintain its status as a top research institution.

Out of the over 30 applications, LiPuma had nominated 19 members, who were all sworn in during Wednesday’s meeting.

Collegian ASCSU Reporter Jonathan Matheny can be reached at news@collegian.com or on Twitter @JonathanMathen2.