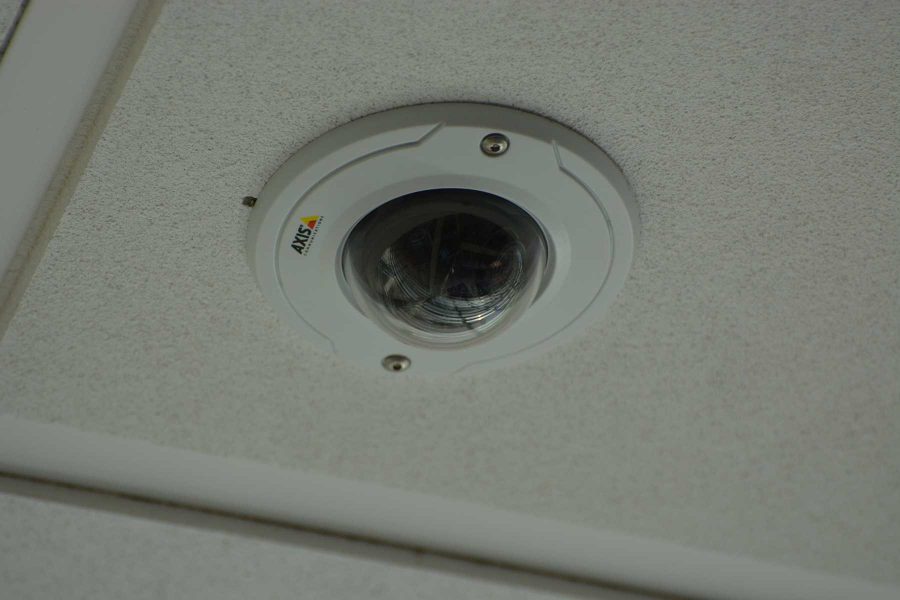 A camera that takes pictures and updates them to the Student Recreation Center website every minute sits above the fitness area on the second level looking down to the first level. These cameras take still shots and uplaod them, instead of live video. (Photo Credit: Megan Fischer)

Cameras are all over Colorado State University, from construction sites to security cameras inside campus buildings, and they are now at the CSU Student Recreation Center feeding live footage to the public.

The CSU Recreation Center currently has three cameras that record footage of the gym on their website for community use. The live footage can be viewed here.

One of the cameras records the basketball gym, while the second films the upstairs weight room and the third is placed in a high corner showing most of the fitness area in front of the main windows.

Some students have assumed that the cameras are there for the public to see how busy the gym is before going.

Other students are apprehensive of the reasoning, however.

“I don’t think that’s the actual reason,” said Jalon Martin, a CSU freshmen ethnic and women studies major. “The people in charge want to see everything … it has become so people can watch us without it being uncomfortable for us.”

CSU Senior Communications Coordinator Dell Rae Ciaravola explained that any other cameras on campus are almost entirely restricted to CSU Police Department’s use, and are not placed in areas where there is an expectation of privacy, such as locker rooms and restroom facilities.

Some students and Fort Collins residents still feel that the cameras in the gym, even in public areas, are invasive.

Amanda Zimmerman, local resident of Fort Collins, regularly uses the CSU Recreation Center and was unaware of the cameras.

“It is absolutely an intrusion of privacy,” Zimmerman said. “Anyone can look it up.”

Since it is on the CSU Student Recreation website, it is available to the entire public.

Senior history major Evan Gardner said he thinks the cameras should only be available to CSU students.

However, some students find that this is an overreaction, and since they gym is open to the public, it is not a privacy issue.

“It is the same as if someone was looking in here if they were already at the gym,” said Maggie Timm, health and exercise sciences senior.

Even still, some remain concerned about the intentions of those who view the footage regularly.

Senior Chance Maron said that he believes the recordings could easily be abused.

“I come to the gym everyday, twice a day, so I know that you have the guys that do come here and just sit and watch girls as they work out,” Maron said. “With the cameras, they can just get online and watch now.”

While some students may think having cameras to check for crowds is a good idea, some believe it does not need to involve cameras. They think there are better ways to let students know how busy the gym is.

“A better way to do that is to track people who swipe in at the front,” said Cameron Goris, mechanical engineer senior.

Hannah Baird, biomedical science major, who has used the footage before, said she understood why they might be useful. However, she also said she probably would not use them regularly.

Many students said that the cameras are not useful because they already know when the busiest times of the gym are.

Some simply believe the whole idea is pointless.

“It is unnecessary,” Maron said. “While they might have good intentions, cameras are an extreme measure.”

Collegian Reporter Jessica Golden can be reached at news@collegian.com or on Twitter at @jgolden242.