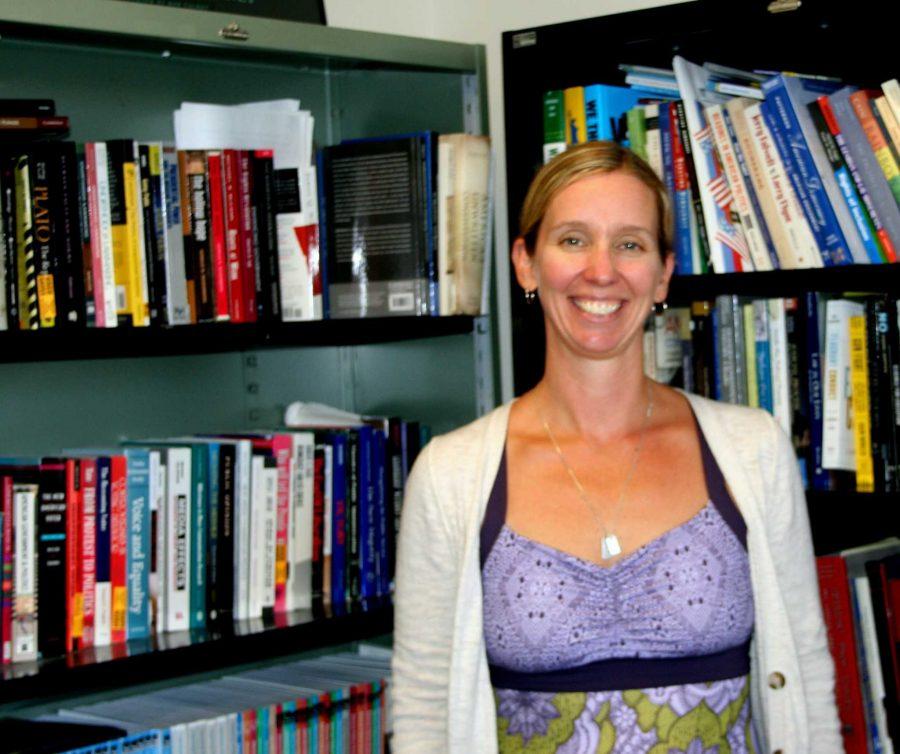 Standing outside of her office, Professor Courtney Daum chats in a steady, engaging voice with students and fellow faculty members. Behind her is a cluttered space littered with political books, sentimental family photos and a bright red League of Women’s Voters poster.

Inside her office, a simple golden apple lays on a filing cabinet, representing Daum’s achievements as a political science professor, beginning her 10th year at Colorado State University.

Along with six other teachers, the Colorado State University Alumni Association named Daum best teacher of the year for the 2013-2014 school year.

Daum teaches American Constitutional Law, U.S. Civil Rights and Liberties, Gender and the Law, Governmental Politics in the U.S. and Introduction to American Government and Politics.

Zach Lasssek, a senior studying communications, took one of her political science classes in preparation for law school.

“I wasn’t too interested in the class beforehand,” Lassek said.  “It didn’t engage me, but then I took her U.S. Constitutional Law class. She definitely has a unique style. She engages everyone in every single lecture. I wouldn’t even call it a lecture.”

He feels that her classroom is an open environment, where curiosity is encouraged.

“There’s a lot of questions and following up,” Lassek said. “It just kind of happens implicitly. You’re just sitting in class, wondering about something, and you can’t help but ask questions.”

Daum believes that her success comes from her value for students as individuals.

“My number one guiding principle when I teach is to make clear to students that the subject matter is really important, but I really care about them and their success in the classroom, in ways that I think are distinct from the subject matter,” Daum said.

She hopes her students will learn more than just political science.

“Being a quality college professor is not simply passing your knowledge and wisdom onto somebody else, but it’s giving them the tools to be critical thinkers, to have strong oral communication skills, to be a good writer, and to be a good citizen and to think about issues in ways that are thoughtful and mindful,” Daum said.

Beyond her attitude in the classroom, students are often engaged by the topics presented in her classes.

“We talk about reproductive rights and same sex marriage and affirmative action and equal protection,” Daum said. “Those are things that students have really strong opinions about.”

“I think that ability to translate that [the material] into language that I understand, shows the depth with her knowledge,” Croteau said.

An active teacher, Daum also is the pre-law adviser and the adviser to the CSU pre-law club. Croteau, the president of the club, appreciates Daum’s role.

“She does a great job of being a resource, but without being overbearing and allowing students to come in and lead,” Croteau said.

Outside of her work with students, Daum also conducts research on pornography, First Amendment rights and the use of social media evidence in rape trials.  She recently published a paper comparing the life of Skyler White in AMC’s “Breaking Bad” to the plight of wives of criminals.

Daum finds happiness through her work at CSU and claims teaching was the only profession she could have pursued.

“I was never somebody who could have a life over here and then have a job that I went to, that would be distinct from the rest of my life,” Daum said. “Because I don’t have the ability to compartmentalize that way. I knew I was going to have to do something that would really fulfill me, really excite me. If not, it was never gonna work.”

Collegian News Reporter Hannah Ditzenberger can be reached at news@collegian.com or on Twitter at @hannahditzy.