Colorado State students travel the world through Semester at Sea 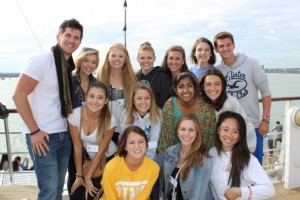 CSU Students embark from England at the beginning of their Semester at Sea journey. (Photo credits: Hannah Adams)

Thirteen Colorado State University students took a break from the main campus on land, and are traveling around the world on water through Semester at Sea.

Semester at Sea is a study abroad program that first set sail from the New York Harbor in 1963. The program is affiliated with 99 schools, including CSU, and is open to students each fall and spring semester.

“It is one of the only truly global study abroad programs in the world, bringing students face to face with the people and perspectives of different nations, rather than exclusively focusing on one nation,” said Lauren Judge, the director of public affairs at Semester at Sea.

There are currently 13 CSU students on board the ship, participating in the “Atlantic Exploration” voyage. This voyage will take the students to various destinations within Europe, Africa, South America and the Caribbean. So far, the students have traveled to Russia, Poland and Germany, and are in Antwerp, Belgium, until Tuesday.

The students will visit 17 cities and 15 countries over the course of 108 days.

“…(We’re) on a freaking boat in the middle of the ocean,” said Katelyn Miller, a business administration and English junior participating in Semester at Sea. “Be impulsive and seize each opportunity that presents itself. Worry about the time and the money later. Right now (we’re) here.”

According to Judge, the general tuition cost of Semester at Sea is around $20,000, but ranges depending on cabin choice and other optional expenditures, such as if a student wishes to partake in the excursions in different countries.

In regards to the cost of the program, Judge said students are generally able to receive some form of financial aid such as scholarships.

However, financial aid was not an option for some students.

“I’ve taken out a lot of loans for this trip,” Miller said. “Scholarships weren’t really an option with my family’s financial situation. I try to focus on the experience right now, although unfortunately I will have to face the money situation when I get back.”

Annual CSU tuition and fees for in state students are approximately $9,313, which includes room and board, according to CSU. For out of state students, the cost is about $25,166. This is why for Taryn Galliher, a sophomore animal and equine science double major at CSU, financial situations did not change drastically.

“I am an out of state student at CSU, so for me, the tuition of CSU was relatively similar,” Galliher said. “I was able to pay for the trip through scholarships, from both Semester at Sea and CSU, as well as through loans and help from family and friends.”

Despite the cost, Hannah Adams, a junior and journalism major at CSU, believes her experience on the ship will be well worth it.

“I just had an itch to travel,” Adams said. “I hope to look back in twenty, forty or sixty years, and say, ‘I still talk to the people I met on the ship or in port, I learned more on that trip than anywhere else, and those were the best days of my life.’”

Collegian Reporter Amanda Thompson can be reached at news@collegian.com or @amanduhh3003.
Related articles

The Pros and Cons of Being an Out-of-State Student