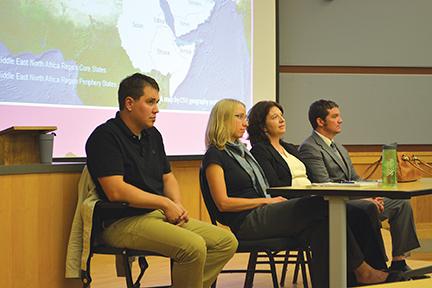 Panelists addressed regions and topics of their speciality, discussing Turkey, reflections on tours in Iraq and Afghanistan and religious minorities in the Middle East.

“This (Middle East conflict) has everything to do with the United States,” said panelist Andrea Williams, Ph.D, an international studies professor. “We have been there for a very long time — for a century in the Middle East, for a half century in Israel and Palestine and in Iraq for 20 years on and off.”

According to Williams, the issues in the Middle East will remain an American problem as long as U.S. involvement continues, playing an inadvertent role in the instability of the region.

Roughly 50 students and faculty came to the panel to ask questions and gain insight on the issues.

If the Islamic State of Iraq and Syria (ISIS) will kill you if you do not leave or do not align with their views, why don’t people switch religions?

“It is always an option to switch religions,” said panelist James Lindsay, Ph.D., a history professor. “ISIS tags houses, and people have the option to leave, to pay a fee to the group or to be killed.”

Can the United States rally with Assad and Iran against ISIS?

“The USA has explicitly come out against the Assad regime, but it will be necessary to be indirectly aligned with them to go against ISIS,” Williams said. “I also think the Assad regime is a perpetually unstable regime … but the opposing side in Syria is an ISIS group … It’s a positive step, but only a step.”

What kinds of progress have you seen in Afghanistan going into the villages?

“Initially, when we went into Afghan villages, they were very anti-American,” said Noah Roberts, special operations officer, who spent three tours in Afghanistan. “By going in there,  doing humanitarian work, being part of local community — it changed from a horrific community to a village that was good.”

“I don’t know how long it will take … We are definitely going in the right direction and working towards that, training Afghan counterparts so they can keep it stable when we leave. But it takes time to train, and putting a date on 2016 put everything on hold … We can have less troops there but need the right troops there.”

What do other members think?

“The decision to invade in the first place is questionable,” said Gazme Cavdar, Ph.D., a political science professor. “The promise of building a new regime from scratch should be questioned … In these countries there is no state, no nation.”

Why are we seeing a significant number of foreign volunteers helping with Jihadist groups?

“It’s the ideology of Jihad,” Lindsay said. “Killing and being killed in the name of God (is an) ideology appealing to a segment of the population. There are more British Muslims serving ISIS than (ever before). Women can come and serve sexual favors to warriors.”

“In the minds of those who follow (ISIS), it makes them the most righteous of Muslims,” Lindsay said. “That is what motivates them … go fight against the preferred infidels.”

The panelists offered insight and expertise, but did not come to any conclusion on the issues.

“There is no answer,” Williams said. “I argue that any solution, any action should involve regional states, not just western or European powers … Beyond military, we need social programs. Any action will not be successful without dealing with broader issues.”

Collegian Reporter Josephine Bush can be reached at news@collegian.com or on Twitter @Jobush620.