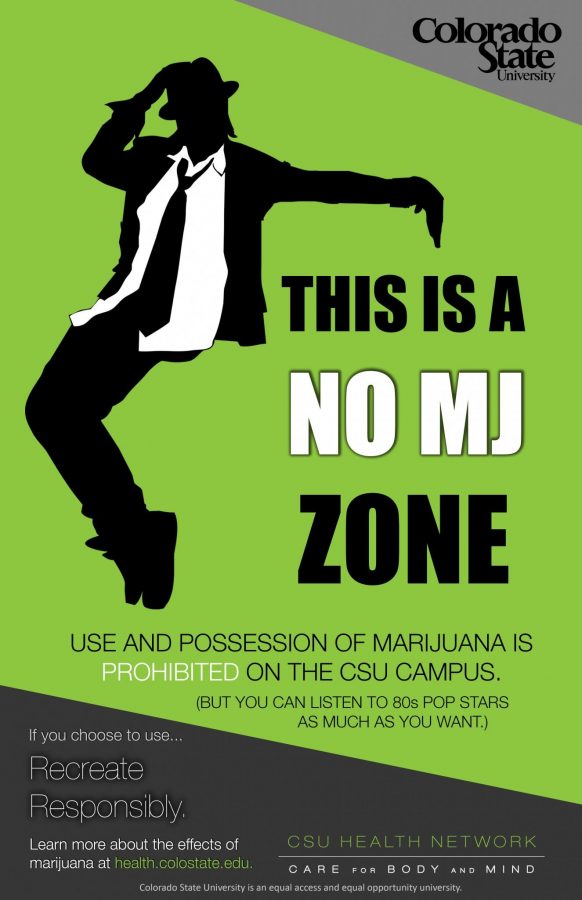 For the first time in Colorado State University history, the University is publicly addressing the issue of marijuana through a campaign called Recreate Responsibly, even though the substance remains prohibited for CSU students by the student conduct code.

“Use, possession, manufacturing, or distribution of illegal (under federal or state law) drugs including but not limited to marijuana, narcotics, methamphetamine … or other controlled substances are prohibited,” states the prohibited individual conduct area of the student conduct code.

Andrea Coryell, Assistant Director of Alcohol and Other Drugs for CSU Health Network, said it is crucial that the University does not change its rules against marijuana for financial reasons.

“In order to receive federal funding, we could not change our rules,” Coryell said.

Since marijuana remains federally illegal, and Amendment 64 allows universities to maintain restrictions, marijuana possession and use is explicitly prohibited by the student conduct code, even for those of age and off campus.

The posters make parallels to light-hearted topics like peanut-butter and jelly sandwiches to illustrate the importance of using marijuana responsibly. One poster, of the four on campus, reads, “Peanut butter and jelly fish? Nasty combination. So is marijuana and alcohol.”

“Sometimes humor catches your attention more than anything else,” said Mellody Sharpton, assistant director of marketing and communications for CSU Health Network. “We did not want students to be turned off … Students say they want to read the information below because of the unusual image at the top.”

Coryell said the four posters focus on the four most misunderstood issues related to marijuana according to data from a focus group done last spring. The issues include mixing marijuana with alcohol, driving under the influence, prohibition on campus and knowing your limits.

Coryell said the campaign is designed to clear up confusion that students have about marijuana.

One CSU student said she was confused why the University has rules against marijuana, but does not enforce them. She said the University should either enforce current marijuana restrictions or abandon prohibition altogether.

Parsons also said the University Recreate Responsibly campaign is only relevant to those who don’t use marijuana.

“Do they have a right to talk about marijuana? Yes. Will students listen? Probably not, unfortunately,” she said. “Only students already against weed will pay attention to the campaign.”

Sharpton and Coryell said a grey area exists between University prohibition and state legalization, but the goal of Recreate Responsibly is to provide students with unbiased, accurate information despite conflicting regulations among the University, state and federal government.