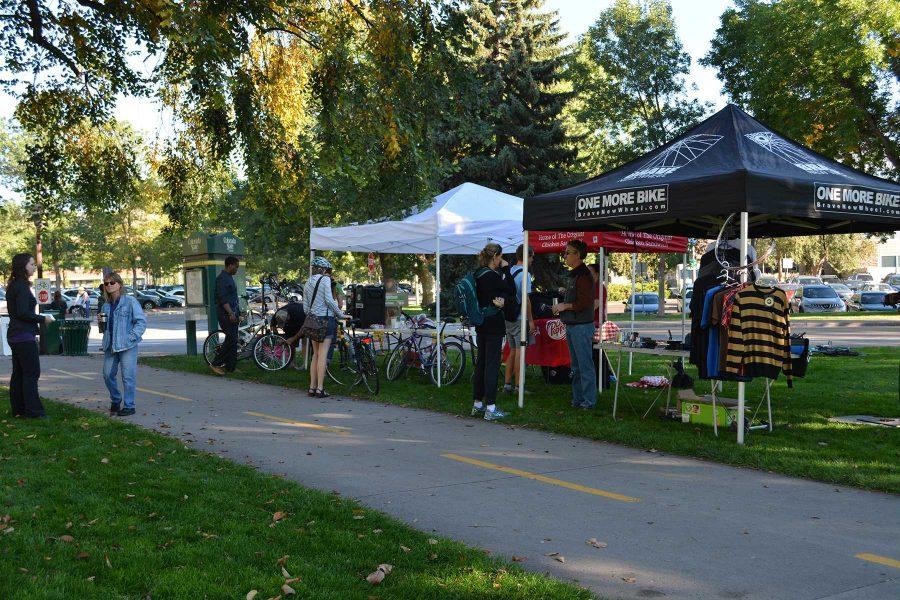 Bike to Breakfast, an event including serveral university departments wanting to educate students on bike safety, as well as some other services, was held September 18, at the intersection of Meridian Ave. and Plum Street. (Photo Credit: Megan Fischer)

Aaron Fodge, the Alternative Transportation manager, asked students as they arrived to eat breakfast if they knew all the hand signals for turning and stopping when they ride bikes.

According to Fodge, since Fort Collins is one of the four best biking cities in the U.S., a big part of doing Bike to Breakfast is to educate students on bike safety.

“We know people will ride their bikes as long as they are in a safe environment,” Fodge said.

Joy Childress, the Bicycle Education and Enforcement Program supervisor at Colorado State, stood on the corner of Plum Street and Meridian Avenue reminding bikers to stop at the stop signs, as a part of encouraging bike safety on campus.

According to Childress, bikes are considered vehicles in Colorado and have to obey the same traffic laws as cars do.

“People are already inspired to ride their bikes, so it [Bike to Breakfast] gives people the tools they need to be safe,” Chlidress said.

A key part of bike safety, according to the CSU Health Network and the Alternative Transportation Department, is wearing a helmet when riding a bike.

“Our students unfortunately wear their helmets less than students at other universities,” said Christina Berg, director of Health Education and Prevention Services at the CSU Health Center.

Bike to Breakfast takes place three Thursdays during September. Thursday, Sept. 25, will be the last Bike to Breakfast and the station will be at the Newton Sculpture on campus, near the Behavioral Sciences Building.

Collegian Reporter Megan Fischer can be reached at news@collegian.com or on Twitter at @MegFischer04.