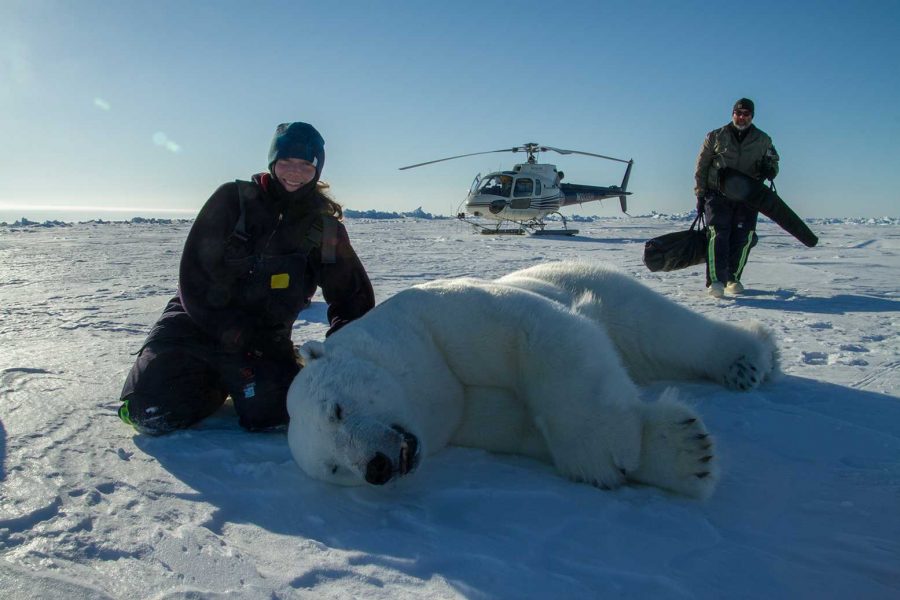 Colleen Duncan of CSU and Todd Atwood of the U.S. Geological Survey collect data from a tranquilized polar bear in northernmost Alaska. (Photo courtesy of news.colostate.edu)

Colorado State University researchers are looking into the ways that climate change may have affected polar bears, including pushing them into new and potentially dangerous environments.

A CSU veterinarian and assistant professor in pathology, Colleen Duncan, traveled to Alaska recently with researchers from the U.S. Department of Agriculture and U.S. Geological Survey to collect evidence and explore what can happen when polar bears are forced to venture onto new lands.

“Polar bears are classified as a marine animal because they depend on the ice and ocean to hunt,” Duncan said. “With climate change, which is obviously happening, the idea is that with less ice days, there is less opportunity for them to hunt.”

According to Duncan, as polar bears are being forced to venture onto dry lands, they are encountering new species.

“(Polar bears) don’t come into contact with other species, so now with climate change, they are being forced onto the land where they have interactions they’ve never had before,” Duncan said.

Duncan’s research also shows that these bears may be exposed to new diseases that would not otherwise have existed in their own natural habitat, such as coxiella burnetii.

Coxiella burnetii is a pathogen that CSU microbiologist Kristy Pabilonia works on from samples Duncan obtains from polar bears in Alaska.

“Coxiella burnetii … has recently been identified in several marine mammal species on the Pacific Coast of North America, but little is known about the epidemiology, transmission, and pathogenesis in these species,” stated an article that Pabilonia contributed to, published in “The Journal of Wildlife Diseases.”

“It’s the sad reality,” Duncan said. “We need to learn to balance and change the paradigm of what we’re supposed to have. I would choose to have polar bears walk the earth before I choose to drive an SUV.”

Though Duncan believes that awareness of the current issue is growing, she said the future of the species looks grim.

“Negative changes continue to happen,” Duncan said. “But with new generations, kids are brought up in a culture of awareness – conservation and climate change is in everyone’s minds. However, statistically, the prognostic is not good.”

Anna Fegre, a CSU student finishing her last year of veterinary school, is also a researcher in this investigation.

“We should all care,” Fegre said. “…it is important to look at other species that are affected by climate change that aren’t as well known. We’re looking at species of amphibians going extinct often before we even know they exist.”

Fegre uses the polar bear’s dilemma as an example of what could happen if action is not taken against climate change.

“When looking at the polar bears, it is a call to arms and makes you realize just how much is changing everyday,” Fegre said.

Though these diseases may not have a significant effect on the bears right now, Duncan said it is a matter of taking preventative measures to keep the situation from worsening.

“The question is not what has happened in the past, it is what will happen in the future,” Duncan said. “That’s the goal, is to look for changes before it’s too late.”

Duncan and Fegre believe there is still time to make a difference.

“With polar bears, you can’t just preserve their habitat in a way that we would traditionally preserve a forest or an ocean,” Duncan said. “If you want to save the polar bear, you don’t have to go to Alaska. You can encourage your neighbor to compost, you can act locally, and it actually has a huge affect on the poles.”

Collegian Reporter Jessica Golden can be reached at news@collegian.com and on Twitter @jgolden242.