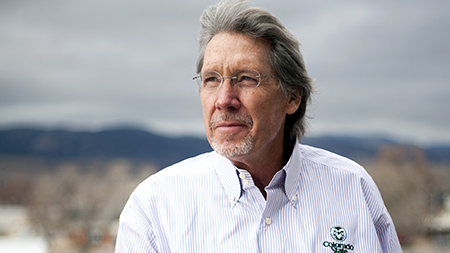 Colorado State University Athletic Director Jack Graham stands outside his office Thursday morning. Graham is optimistic about the direction of CSU's football program, but disappointed in students leaving at halftime of games.

Jack Graham, one of the most revered yet controversial athletic directors in the history of Colorado State University athletics, has been removed from his position by school president Tony Frank.

Graham, who hired basketball coaches Ryun Williams and Larry Eustachy and football coach Jim McElwain during his tenure, had drawn both praise and ire from Fort Collins residents for spearheading a campaign to build a new on-campus football stadium. Graham first pitched the idea to Frank in the fall of 2011 and by the fall of 2012, the University’s Board of Governor’s gave their approval for the project to move forward.

However, Colorado State had only raised $24.2 million as of June 30 for the project. According to statements by Frank, ground would not be broken on the stadium project until half of the expected $220 million cost had been raised.

“I have elected to terminate Jack Graham’s employment as athletic director,” Frank said in a CSU press release. “While I am grateful to Jack for the energy he’s brought to CSU in establishing a culture that expects excellence within Ram Athletics and his actions in hiring great coaches and staff, there have come to exist some substantial differences in our views. Based on our differences, I have chosen to exercise the termination for convenience clause within Jack’s contract to allow the university and the athletic department to move forward, building on the successes that Jack brought to our program. As a personnel issue, this will be the University’s only comment on this personnel action.

“Our athletic department has made great strides in the last few years, and I wholeheartedly expect that progress to continue. This in no way diminishes our institutional commitment to excellence in athletics. We’re excited about the future of our program and looking forward to a great year.”

Graham’s contract runs through November 2016. A CSU spokesman said Graham will be paid his annual salary of $260,000 through that point.

In a release issued by PRNewswire, Graham said his firing was “surprising” and “deeply disappointing.”

“Today, Colorado State University informed me of its decision to terminate my contract as Director of Athletics,” the release said. “This announcement is surprising and deeply disappointing to me.  I will personally miss the opportunity to continue to build on what we have accomplished during the past two and a half years.”

Graham went on to list a number of accomplishments by the department under his tenure, including the hiring of new high-profile coaches and an increased marketing presence.

“I sincerely hope that the University’s decision today will not derail the significant strides and positive developments that have been made in CSU Athletics and our fundraising efforts for the new stadium,” the release said. “I will deeply miss the opportunity to help build on these successes.  My wife Ginger and I love Fort Collins – we have made it our home – and we value the role the University plays in our community and believe in the people we’ve brought to the Athletic Department.  We will miss the daily contact with colleagues in the Department, student-athletes and our coaches. These great people are the most rewarding part of the job.”

Morris was hired by Graham in June 2012 as the department’s deputy athletic director.

“In John, we are fortunate to have a seasoned, successful administrator who has the respect and support of the entire athletic department to help guide us through this transition,” Frank said. “Our commitment to our student-athletes and excellence across the university drive our decisions about Ram athletics and always have.”

“On behalf of the entire athletics department, I can say that we are all committed to supporting President Frank and the university during this time of transition. I appreciate the opportunity to serve Colorado State University as the interim Director of Athletics. CSU athletics has made great strides in the past few years, thanks in significant part to Jack Graham’s vision and passion for CSU.  With our outstanding student-athletes, coaches and staff, in addition to the tremendous support we receive from everyone in the Rams community, we will continue to build on the strong momentum that has been created.”

The university will conduct a national search for the next athletic director and will announce details of that search later this month.

As you may have heard, I have removed Jack Graham as the Director of Athletics and issued the following statement:

“I have elected to terminate Jack Graham’s employment as athletic director. While I am grateful to Jack for the energy he’s brought to CSU in establishing a culture that expects excellence within Ram Athletics and his actions in hiring great coaches and staff, there have come to exist some substantial differences in our views.  Based on our differences, I have chosen to exercise the termination for convenience clause within Jack’s contract to allow the university and the athletic department to move forward, building on the successes that Jack brought to our program.  As a personnel issue, this will be the University’s only comment on this personnel action.

As our most loyal Rams supporters, I want to let you know that, even with this change, our commitment to excellence in CSU Athletics has not and will not change. And your continued passion and support for the green and gold will help keep that momentum strong.

In addition, this decision is in no way connected to the on-campus stadium project. Our commitment to our student-athletes and to excellence across the university drives our decisions about Rams athletics and always has. The stadium project is separate from this personnel action and will continue to move forward as planned, with me providing a recommendation to the Board of Governors in October.  We appreciate all of the support CSU has received for this initiative through your donations and commitment.

A national search will begin immediately for Jack’s replacement. I have named Deputy Athletic Director John Morris as the Interim Director of Athletics to lead the department during the search.  John is an experienced and respected administrator who I am confident will continue the progress that has been made in recent years.

Above all, I want to reinforce our shared, strong commitment to CSU Athletics and to providing a climate that inspires and supports the success of our student-athletes.  Our institutional commitment to excellence in Rams athletics has never been stronger. We’re confident in the future and looking forward to a great year – thanks for your support.”