Minimum wage in Larimer County does not support cost of living 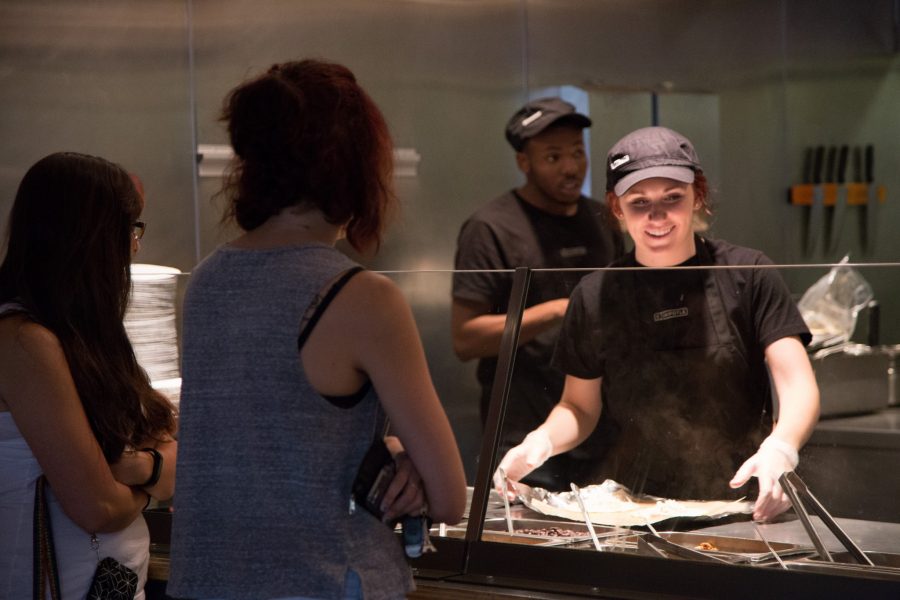 This is based off of the MIT Living Wage Calculator. It calculates the lowest wage a person could live on working full-time at 40 hours a week, factoring in necessities such as food, housing, transportation and medical expenses. On top of that, to raise a child in Larimer County one would need to make $20.28 an hour to afford the cost of living.

“I have school on top of work, so it’s impossible to work 40 hours a week,” Goforth said. “Eight dollars an hour does not cut it.”

Robert Anderson, a junior marketing student at Front Range Community College, works at Chipotle on College Avenue. Employees are paid $8.50 to $9 per hour, almost a dollar over the state minimum.

“Here, I have money to pay for my rent and extra money to buy food,” Anderson said. “Nine dollars is the perfect amount for anybody to live on.”

Anderson said his girlfriend left her minimum-wage job at 7-Eleven because the cost of living was too high. He considers raising the wage a Catch-22 situation.

“Of course, the cost of living is going to go up, just like everything else,” Anderson said.

Greg Luse, who graduated with a history degree from CSU in 2012, thinks that there is more to the issue than hiking up hourly salaries.

“I don’t think people understand what it is to raise minimum wage,” Luse said. “They know the basics, but there’s a greater economic structure that they don’t understand.”

Madi Hill works at Ace Hardware on College Avenue, where the hourly rate is more than minimum wage. She is afraid her hours would be cut if the wage was raised.

“I don’t think it’s smart, because people are just going to get more workers and then cut back the hours on the other people,” Hill said. “The only the reasons why things cost less is just because we can afford it. If you get a higher raise, you’re just gonna get higher food prices.”

Luse noted that gradually raising the minimum wage will lead to an even higher cost of living.

“Well, the cost of living is already going up,” Luse said. “That’s why you raise minimum wage.”

Higher paying jobs are available in Fort Collins, but Goforth appreciates the flexibility he is given at Farmer’s Table.

“I could find a higher paying job, but they might not be as flexible,” Goforth said. “Flexibility is important to me while I go to school.”

After a bill to increase minimum wage was shot down in the U.S. Senate in April, raising the minimum wage has been a topic of conversation on the national and local levels. The White House’s effort to raise the federal minimum wage can be followed on the Raise the Wage website.

IKEA is the newest addition to a growing list of retailers to institute a company-wide wage increase for employees, independent of federal policy.

Ikea made an average 17 percent increase in their wages. Depending on the cost of living in the area each store is located in, the increase is as much as $13.22 an hour in more expensive locations and $8.69 in cheaper places to live.

Katie Schulze, treasurer for the Fort Collins local business advocacy group Be Local, believes local businesses already take care of their employees the way IKEA is striving to with a wage increase.

“If you treat your employees well, give them opportunity and pay them adequately, it will benefit your business greatly, and our local businesses do a great job of this.” Schulze said. “Local businesses understand the benefits of employee retention more than bigger businesses.”

The 13 states that increased minimum wage this year have seen stronger employment growth than those states that did not.

Schulze hopes local Fort Collins businesses are thriving enough to pay employees more than minimum, but even if not, local businesses give the community character and help keep what people care about alive,which is important to her.

“Local businesses are the engine for a thriving community,” she said.