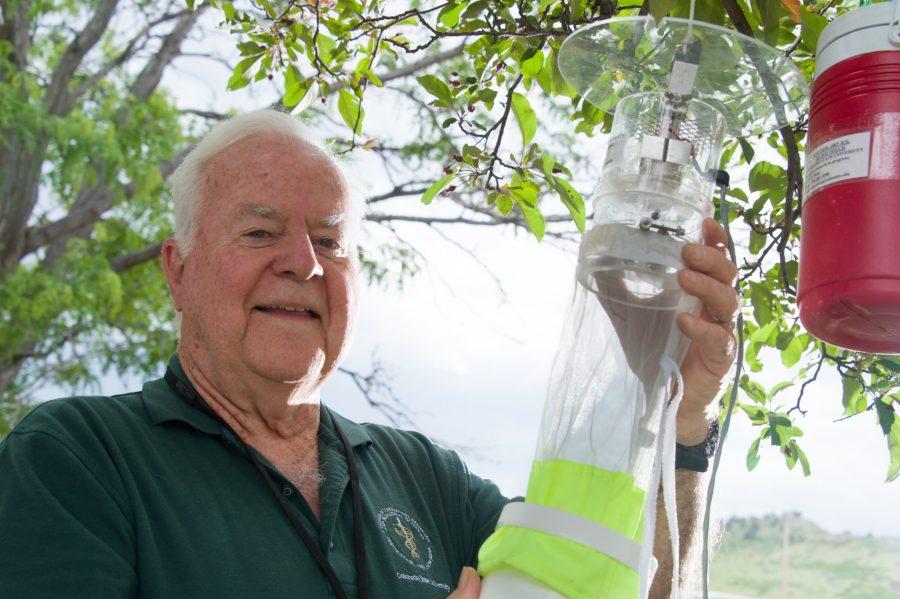 “I anticipate that the virus will amplify in the coming weeks,” Calhoon said. “But, to what degree is dependent on weather.”

The city will not consider spraying insecticide to combat infected mosquitoes until the index reaches 0.75 and two human cases are confirmed in the same week.

The City of Fort Collins recommends practicing the “Four D’s” to minimize the risk of West Nile virus.

“Now that we have seen infected mosquitoes, it is important that people are extra vigilant about practicing the Four D’s,” Calhoon said.

Two cases of human infection have been reported in Colorado, one in Pueblo County and one in Saguache County. Last year, 89 people were infected with West Nile virus in Larimer County.

Stay with the Collegian for more updates on this story.

Due to increased precipitation and recent hot temperatures on the Front Range this year, CSU and Colorado Mosquito Control are urging community members to take precautions against West Nile infection. West Nile is a potentially fatal virus commonly carried by infected mosquitoes.

The virus originates in birds and is generally transmitted to humans and horses through mosquitoes.

According to the Centers for Disease Control, West Nile virus can lead to minor symptoms like nausea and headaches, but on rare occasions causes serious neurological illnesses such as encephalitis and meningitis.

Coincidentally, the CDC office dedicated to insect-vectored diseases such as West Nile is located at the CSU Foothills Campus.

“The public should be concerned about West Nile every year,” said Jessica Schurich, a representative from Colorado Mosquito Control. “This year we have experienced an above-average number of floodwater mosquitoes, and that could translate into Culex mosquitoes.”

Luckily, West Nile is not spread by the prevalent floodwater mosquitoes, but is carried by Culex mosquitoes. This type of mosquito may or may not experience an influx this year, due to conflicting weather trends this spring and summer.

The City of Fort Collins has not yet detected infected mosquitoes or birds. However, according to the Larimer County Health Department, Weld, Boulder, Adams, Delt and Mesa Counties have all reported Culex mosquitoes infected with the disease.

Despite the above average number of floodwater mosquitoes, Chet Moore, a CSU expert in mosquito-borne viruses, believes recent cool temperatures could prevent the spread of West Nile by Culex mosquitoes.

“In our area there are only two species that appear to be involved with transmission of West Nile, and those are Culex Pipiens and Culex Tarsalis,”  Moore said.

According to Moore, Culex mosquitoes are most active around sundown, but recent cool nights could prevent mosquito activity.

CSU journalism junior Michaela Koretko had firsthand experience with West Nile when her mom, Carol Koretko, was infected in 2003. Koretko thinks her mom was infected from a mosquito bite at an outdoor birthday party. As a result of the West Nile virus, she developed encephalitis.

Carol was in a coma for 30 days. After an exhaustive rehabilitation process, Koretko’s mom relearned to talk, feed herself and move her arms. Today Carol’s legs are still paralyzed, but she is able to move her upper body, which enables her to garden regularly and drive with modified pedals in her car.

According to the Larimer County website, there have been zero reported cases of West Nile in Fort Collins this year, but the risk is rising. Schurich said infection rate is high in young people because they have become complacent about putting on repellent.

Colorado Mosquito Control actively surveys mosquito activity all summer by laying down 53 traps per week and displaying a map of the activity.

“We live in a community where people really value their time outdoors,” said Mike Calhoon, Fort Collins Parks Supervisor. “If we can get people to participate in the Four D’s, it can really cut down on the transmission of West Nile.”

For more information about mosquito prevention, visit Fight the Bite, a Colorado prevention and education campaign.

Collegian Staff Reporter Danny Bishop can be reached at news@collegian.com.