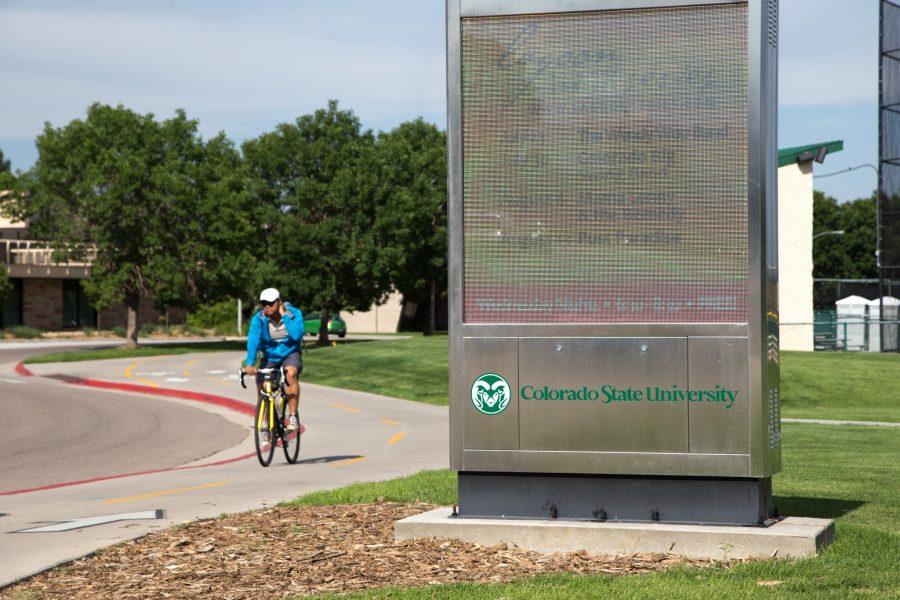 At Colorado State University, they’ve been used in protests, political rallies, and every Greek event ever. Now, the once-prime banner has a new rival: the digital sign.

Dotted across CSU’s campus sit large stainless steel columns with bright, high-quality digital screens tucked behind protective glass. In total, there will be eight signs placed around campus, according to Mark Minor, associate vice president in the department of External Relations.

Minor said the signs will help decrease the cost of and waste from the paper and plastic banners commonly used to advertise.

“People buy temporary banners,” Minor said. “They can be kind of expensive; you could spend 2-300 bucks on a decent size banner.”

Starting soon, a website will teach students how to advertise on the signs, said Minor.

Along with student ads, there will also be spots available for paid advertisements, which will help pay for the cost of the signs.

Totaling around $400,000 for all eight signs, or $50,000 each, the money was loaned to CSU from the CSU Foundation, a separate financial entity from CSU that manages donated money to the University.

The University has 10 years to pay off the loan, at 3.53 percent interest.

According to Minor, the advertisement on the screen will change every three minutes, meaning there will be 20 ads shown per hour. Minor said some entities’ signs change every 10 to 20 seconds, which the University wanted to avoid.

“We don’t want to make it look like Times Square,” Minor said. “It’s a university – we want to respect that environment.”

Safety is another substantial feature of the signs, according to Minor. The CSU police department and the Public Safety Team will have 24-hour access to the signs to broadcast messages in case of an emergency.

According to Senior Public Relations Coordinator Dell Rae Ciaravola, the public safety team will determine whether to use the signs on a case-by-case basis. Because it is a new system, the team is still determining how to use it.

“Since the signs are new, the PST is developing a protocol and getting trained on using them,” Ciaravola wrote in an email to the Collegian.

Although the signs will only run from 6 a.m. to 9 p.m., the police department and safety team have the ability to turn on the signs and alert campus at any time.

According to Minor, one of the reasons for the signs only running during specific hours was to cut down on electricity costs.

“We talked a lot about the electricity,” Minor said. “This is a campus where being sustainable is important to people.”

Minor expects the yearly electricity bill to total $5,000 for the signs, but that estimate may change given that they are monitoring the total electric output and can change things such as the brightness of the screen to lower electricity costs.

Connie Hanrahan, owner of the Mantooth Company and overseer of the Lagoon Summer Concert Series at CSU, said the advertising from the digital signs has been great so far.

Hanrahan said she can’t tell whether crowds have been bigger because of the signs; however, she says it’s a great opportunity to share details of the concerts, which happen Wednesday evenings near the lagoon on campus.

Collegian Staff Reporter Skyler Leonard can be reached at news@collegian.com.