Where there is pride, there is power at 39th Denver PrideFest 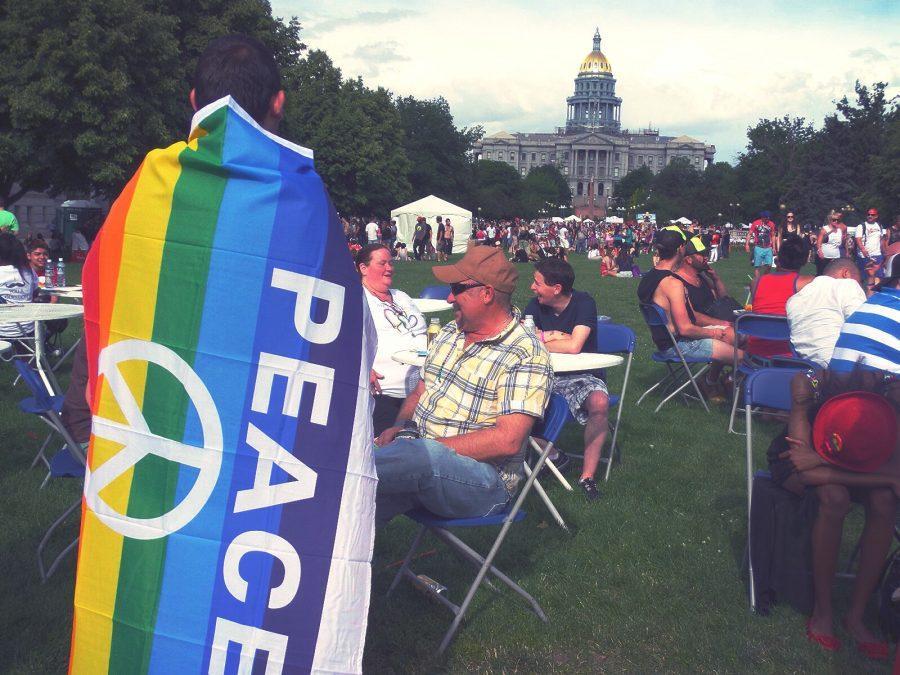 PrideFest attendees relax at Civic Center Park, in front of the Capitol building.

Civic Center Park was abuzz Saturday and Sunday with the 39th annual Denver PrideFest, kicking off the first official weekend of summer with positive vibes and colorful people.

Numerous tents were set up around the perimeter of the park for various vendors and organizations, while upbeat music, live entertainment and thousands of attendees occupied the park itself.

According to the event’s website, Denver PrideFest is now the third largest pride festival in the United States. The site also states that “the mission of Denver PrideFest is to create a fun, safe and empowering space to celebrate and promote the heritage and culture of the LGBT and allied community in Colorado.”

“[PrideFest] is all about community, belonging and self-expression,” said Amanda Saker, who attended the event.

The atmosphere was blooming with confidence and unconditional acceptance.

“I love the fact that Denver has one of the biggest pride festivals ever,” said Michelle Robbins, who attended the event for the first time Saturday. “It’s everything I expected it to be.”

Among the represented organizations at PrideFest was the National Gay and Lesbian Task Force.

“It’s the oldest LGBT organization, founded in 1973,” said Daniel Pino, a representative for the Task Force. “We worked to remove homosexuality as a mental disorder from the DSM (Diagnostic and Statistical Manual of Mental Disorders), and we stand for full equality and liberation for everyone. We are the progressive voice in the LGBT community.”

Representatives from the Mile Hi Church, like Peg Coats, also thought it was important to attend PrideFest.

“[We believe] that everyone is blessed; all religions, all sexual orientations, everyone,” Coats said. “Everybody is a divine expression. We’re here to be that support, and say that ‘You’re perfect just the way you are.”

In addition to the groups who were there to empower, numerous vendors were there to inspire and encourage. Joanna Schwab, founder of the clothing line Pride with Style, had a tent at PrideFest to promote her new company.

“I wanted clothing that was subtle, comfortable and still made me feel part of the LGBT community,” Schwab said. “As a community, we continue to evolve. We want to keep the stories alive, like the Stonewall riots.”

It was the fifth Denver PrideFest for founder Stephanie Smith of Be Who You Are clothing company.

“Be who you are; it’s more than just a gay message,” Smith said.

Collegian Staff Reporter Haleigh McGill can be reached at news@collegian.com.