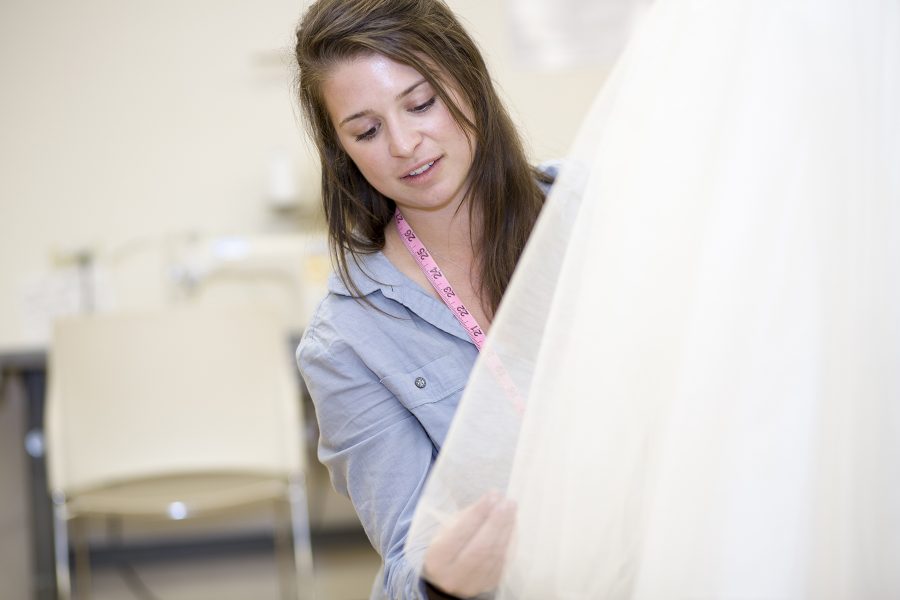 Sydni Heldmann works on a dress in one of the Gifford studios Wednesday night. She among many other students will be featured in Friday's fashion show at the Lincoln Center.

Colorado State University may be known for its agriculture, but the Department of Design & Merchandising received high praise from Fashion-Schools.org this month.

For Fashion-School.org’s second year of rankings, CSU was awarded ninth place in the country for fashion merchandising and placed 16th for top fashion design schools in the country, ranked next to universities dedicated to art and design.

First place went to the Fashion Institute of Technology in New York. The University was also awarded second place in both categories for the Southwest division, second to Oklahoma State.

According to a press release by Jeff Dodge, CSU additionally won the first Award for Excellence from the American Textile Manufacturers Institute.

“Our faculty is well-known internationally,” said Nancy Miller, department chair. “They are good at looking at things multidisciplinary, such as historically, culturally, psychologically and from a business perspective.”

To recruit prospective students, the department invites local high schools to attend the senior capstone fashion shows. Once accepted, students find out early on if they are a good fit in the program, with one-on-one feedback with instructors.

The department is currently home to 16 faculty members and about 550 students.

“The department has been part of CSU almost since it became a land grant university,” Miller said.

Cameron Moon, who graduated in 2012 with a master’s degree in design and merchandising, just opened the boutique Magnolia Moon located on 608 S. Mason St in May of this year.

She accredited much of her success to the caliber of the fashion program.

“The program has excellent faculty,” Moon said. “They are at the top of the field and superstars in the industry.”

Miller credits the program’s success to an emphasis on a hands-on approach, encouraging students to study abroad and take internship credits. In the past, students have interned with major fashion labels like Betsy Johnson, Diane Von Furstenburg and Nordstom.

The department also offers internships with sportswear industries such as Pearl Izumi and Spyder Active Sports.

According to Miller, the labels have always been inviting to CSU students.

“They say, ‘We want others from CSU,” Miller said.

Verretta Andersen, CSU senior studying apparel and merchandising, will be interning with Jonathan Simkhai in New York City in the fall, and currently assists in the production department at Fashion Design Center Denver.

Andersen is graduating in December, but said the program is making some changes in their class structure.

“They are redoing the way classes are taught,” Andersen said. “They are updating the program so it’s modern and modeled after schools higher on the [Fashion-Schools.org] list.”