Stan Lee: The Man, the Myth, the Legend 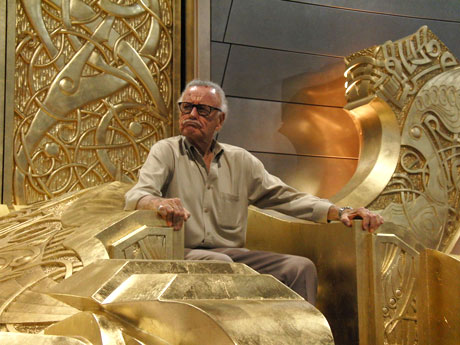 You might recognize his mustachioed face and signature shades in all his Marvel film cameos. Stan Lee, the comic book writer and former president of Marvel comics, is practically the father of the superhero team concept. Co-creator of the Fantastic Four, the Avengers, and the X-Men, he is the unofficial figurehead of the comic book industry. At 91, Stan Lee has lead a colorful life while inspiring millions to read and write comic books.

He became an editor at 19

Stan first started at Timely Comics (eventually Marvel Comics) as an ink well filler. He eventually graduated to text filler and writing filler before Joe Simon, editor, and Jack Kirby, the staff artist at the time, left Timely. So at 19 years old, Stan was promoted as interim editor. He proved to have some talent for the position which lead him to become the editor-in-chief.

Unhappy with what he was producing, he considered leaving the industry. But his wife, Joan, encouraged him to give it one last shot and make something that he would be proud of. We should thank Mrs. Lee every day because without her encouragement, Stan would not have teamed up with Jack Kirby to make the Fantastic Four.

He won the National Medal of Arts

Stan Lee was endowed this honor by President George W. Bush in 2008. Given by the President of the United States, it is the highest honor a person can obtain for an achievement in art. He joins many other influential artists, like Georgia O’Keefe, Ella Fitzgerald, Philip Roth, and Gene Kelly.

In 2009, Long Beach, California and the County of Los Angeles declared October 2nd “Stan Lee Day”. Two years later, he received the a star on the prestigious Hollywood Walk of Fame. You can get the exact position and GPS coordinates of his star here.

He wrote for DC comics

In 2001, he wrote a miniseries called Just Imagine… where he recreated some of DC’s most famous superheroes. For instance, he wrote Wonder Woman as Maria Mendoza, an activist protesting a corporation from destroying an ancient historical site. She snuck through the barriers when she comes across a magical tablet which she decodes. She gains powers driven by the sun and has to fight the CEO who gained dark powers from the tablet.

He has a cameo in nearly every Marvel movie

Since 2000, this silly joke ended up being a tradition. The New York Post did a definitive list of all his cameos and it appears that he has only missed three movies in the past 14 years. Rumor has it that he did not have a cameo in X-Men: First Class because someone forgot to call him. Oops. Luckily, he has already confirmed his cameo in the upcoming Guardians of the Galaxy. Let’s hope he will be in many Marvel movies in the future.

For more about Stan Lee and his life, I would recommend picking up his autobiography, Excelsior! The Amazing Life of Stan Lee.