CSU student, bookstore employee overcomes obstacles to get her degree 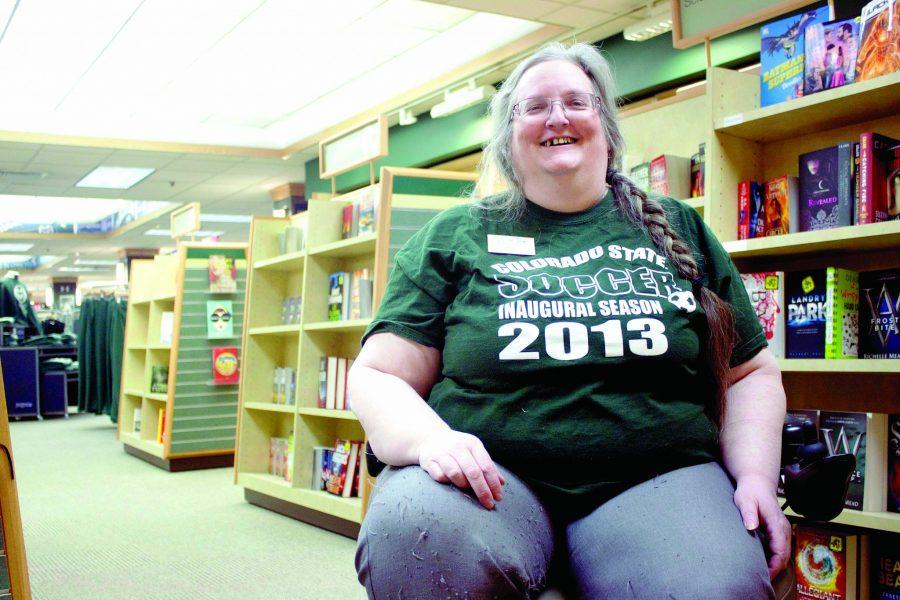 Laughing, Fran Wilson takes a break at work to talk about her life at home. Wilson has worked for the CSU bookstore for 20 years while going to school part time as a Spanish major.

A CSU student and full-time CSU Bookstore employee of 20 years, Fran Wilson works hard to complete her degree despite a life-changing incident that left her wheelchair bound.

She stopped working for four months when she lost her left leg below the knee in a car accident.

When the accident happened in April 1996, Wilson was two years from her Spanish bachelor’s degree. She was back to work that August.

“It was one of those no fault things,” Wilson said. “My mother and I were sitting at this bus stop and this person …  lost control of the vehicle during her seizure and ran right into us. My mother had three broken limbs — she was dragged under the car — and I was tossed head over heels.”

The bookstore employee laughs and shrugs at every mention of the accident and consequential obstacles and struggles that ensued thereafter.

“It took me two years to get over it because I was really angry about everything,” Wilson said. “I suspect each disabled person has to come a decision whether they’re going to be angry for the rest of their lives and drive themselves and everyone else around them crazy, or make the best of what they got left and go for it.”

Changes in the workplace

John Parry, Wilson’s boss and the director of the CSU Bookstore, said he has seen many minor improvements of Wilson’s workspace since he’s been there, including an installation of a push button on one of the doors so Wilson could enter into the break room.

When the bookstore remodeled a few years ago, they did it with Wilson in mind. The walkway was turned into a hard surface that gave her and anyone else that needed it easier access, according to Parry.

Parry also said that the new Lory Student Center will comply with the Americans with Disabilities Act so anyone with mobility issues like Wilson will have ease of access.

Parry has known Wilson for the 17 years that he’s worked at CSU.

“Fran is one of the most pleasant people that I know and work with,” Parry said. “She’s quick with the laugh and very patient with people, you know. The struggles that she has are not something that she shows externally … I’ve always found her to be very positive and very upbeat.”

Parry expressed that Wilson was a great resource and asset. He said he was impressed with her ability to overcome adversity. He felt that he has done everything he could to make sure she has all the tools and resources to be successful.

Wilson struggles with Carpal Tunnel Syndrome, so when she’s in her manual chair she sometimes finds it difficult to maneuver. Occasionally, Wilson said, there’s only one bathroom in older buildings and getting there is very cumbersome, sometimes even impossible when you are on the third floor.

Every building on campus has a proctor who takes care of building issues that students and faculty or staff may have. Proctors for each building are listed on CSU’s Facilities Management’s website. Proctors like Lyn Karius of Clark C is involved with issues immediately as they arise.

“I let people into their rooms or classroom when they lock themselves out. I also forward emails from facilities when there are any work remodeling issues going on for the whole building. There is something every week,” Karius said. “I would certainly personally get involved if it was something immediate. I would go help them wherever they are and then contact RDS if they needed some kind of equipment.”

There are obstacles associated with being in the classroom, as well.

“So as not to be disruptive, I sit in the back,” Wilson said. “I don’t like it and sometimes it’s hard to get up when we do presentations and stuff like that, I can’t reach the technology. So one of two things occurs: a teacher or student will advance the slides for me while I talk, or sometimes I’ve printed my slides out for people and handed them out so I could stay where I’m at.”

Wilson says it’s OK to offer to help people who are disabled, and that people shouldn’t be afraid to offend.

“Ask if we need assistance. All we have to do is say, ‘No thanks,’” Wilson said.

Transitioning to the new normal

When she said she was adjusting to life after the accident, she dealt with depression, limited maneuverability, and her mother, who was diagnosed with uterine cancer shortly after the accident. Wilson said learning to accept the new normal was very difficult.

Wilson stressed how hard it was to transition — mentally and physically.

“I was one of those people that was chronically depressed, but I just never went to the psychologist,” Wilson said. “After the accident, I went to physical therapy, I went to mental therapy and that really helped me to get a more positive outlook on life and to understand how to be happy.”

“I had to set up a network that worked,” Wilson said. “To help me achieve what I wanted to achieve. You just start asking questions because if you don’t ask, you don’t get.”

Transportation is a big issue and has been since the accident, but Wilson said she has it under control.

“It got to the point where I found it very stressful to wait at the bus stop because that’s where I got hit,” Wilson said. “So I rely on Dial-a-Ride to get to and from classes. That’s a door-to-door service. They pick me up at home, make sure I get on the bus and then they make sure I get in the door here.”

Wilson has been through a lot. The wheelchair hasn’t always been her primary method of transportation, but it’s the one she enjoys the most. Now, Wilson believes the chair is like an extension of her body. She feels offended when people rest on it.

“We tried using the prosthesis for a while … about four years. But I was never able to progress with it. I had some anger issues with it as well. I decided to sit down because I wasn’t really enjoying anything and I didn’t really have enough energy to do anything. I just wanted to enjoy my friends and family, people around me and start doing things again.”

There are insurance annoyances as well. Wilson has to resort to a manual chair every once in a while when she runs out of energy in her electric wheelchair. Her insurance deductible is so high that to buy new batteries costs her $600. At one point, she spent $1,500 on three new motors for her chair in a period of just a few months.

Not being able to walk has changed Wilson’s life forever.

“Before the accident I wanted to learn how to do Irish dancing and golfing,” Wilson said. “That went out the window … I used to like to walk. I would walk to work, I really liked it. So that was one of the things I was really bitter about.”

But she still manages to have fun. Now, she likes to read and cook. She hangs out with friends and family, and even gets to take that walk in her chair from time to time around the jogging trail where she used to live.

She is interested in Spanish heritage and culture, too. She said she enjoys the language and has been working on her Spanish degree for a long time. When she came back to school in 2003, she began taking one class a semester. Now she’s two classes away from her bachelor degree.

Wilson’s 20-year plan is almost done, she said, and she has plans moving forward.

“I like doing translation work, I want to do more of that. I want to get my masters in Spanish and teach English as a second language,” she said. “Language fascinates me, words fascinate me and it’s intriguing to me.”