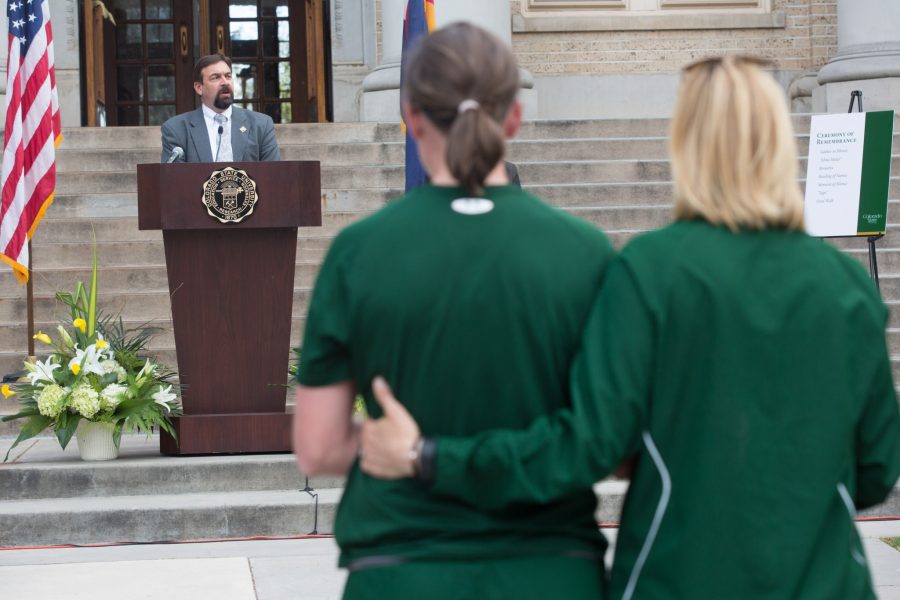 Footsteps were the only sound made by those who attended the first annual remembrance ceremony as they walked from the Administration Building to Danforth Chapel on Thursday, April 24.

“They were all bright lights in the lives of this community. It seems a bit dimmer in their absence,” CSU President Tony Frank said in a 15 minute speech to introduce the ceremony. “They graced us with their presence and they live on in our memory.”

“It is just our way as a community of saying goodbye. We are honoring the memory of people who we miss and who were important to us,” said Cara Neth, CSU’s director of administrative communications.

According to Neth, a remembrance ceremony has been in discussion since the fall 2013 semester and it is something that CSU hopes to make an annual event.

“It’s important to have an opportunity to come together and reflect,” Neth said. “There is no obligation for people to show up, but the opportunity is here for people who want to be here.”

The ceremony was attended by ASCSU President Nigel Daniels.

“I think something like this has been needed for years,” Daniels said.

According to Daniels, his administration has been working on improving public safety on subjects including mental health and sexual harassment.

“One of the things that (CSU) has been really diligent in doing this year is pressurizing our representatives both at the state level and at the national level to commit to changing and addressing public safety,” Daniels said. “I think that it is real and we, as a CSU community, should recognize that realization and commit to being activists in our own ways … We need to come together and really support each other.”

Though not every tragedy is brought to surface, Daniels would like to see the community come together to support public safety.

“The main message we want to give to everybody in this community is that if you need help, just ask,” Neth said. “If you are concerned about a friend, tell someone.”

Zoe Black, a freshman art major, attended the remembrance ceremony in honor of a friend who committed suicide in the fall semester. Black knew her friend since middle school and said she started noticing signs of her friend’s depression during her senior year in high school.

“She just seemed like herself,” Black said. “I don’t think she really showed that part of herself except for when she was alone. She was alone a lot.”

According to Black, it was hard for her to accept that her friend died.

“It wasn’t completely unexpected, but it was still hard to believe,” Black said.

Janelle Patrias is CSU’s Coordinator of Mental Health Initiatives, a position that was created two-in-a-half years ago to oversee outreach and prevention networks at the University.

Patrias said she wants the CSU community to know how to receive the information and support that may be necessary for their health.

“Our counseling sessions — students are already paying for those with their student fees,” Patrias said. “So, if folks are really struggling or feeling overwhelmed, or down or depressed, we want them to come in.”

The counseling services are available for wide ranges of struggles a person may be going through.

“Our counselors really are working for students where they are at,” Patrias said. “Students are coming in and they are struggling with home sickness, fear of failing an exam or struggling to identify if they are in the right major or not. Those issues are happening with our counselors as well as dealing with very severe and persistent mental illness.”

A person who is looking to set up a meeting with a counselor can either call or have a walk in appointment.

The initial meeting with a counselor will include talking about the pressing, initial occurrences going on in their lives. After this first meeting, there will be a counselor assigned for them to see on an ongoing basis.

According to Patrias, there are a variety of ongoing workshops to help with prevention in areas of stress and anxiety.

According to Patrias, a program called Notice and Respond was created to train students, staff and faculty to recognize stress in those around them and intervene to connect the individual to the correct resources.

“It is a pretty new program still. We started it this past summer and in that time have trained over 1,300 students, staff, and faculty so far this year,” Patrias said.

CSU has seen 14 percent of the student body which, according to Patrias, is more than other institutions of a similar size.

“I don’t think that means we have more problems here, I think we have more students who are willing to take action,” Patrias said.

According to Patrias, it is important to be able to manage stress. This can be done through exercise, a healthy diet, and know early coping mechanisms before stress builds up.

“This time of year can be very stressful and overwhelming for individuals. I like the idea of emphasizing that people be someone who sees someone that might be struggling, whether it be a close friend, or someone they are in class with or a group member, that it’s all of our roll to reach out to them and try to connect with them and know how to help that person if they might be struggling,” Patrias said.

Collegian Reporter Stephanie Mason can be reached at news@collegian.com.