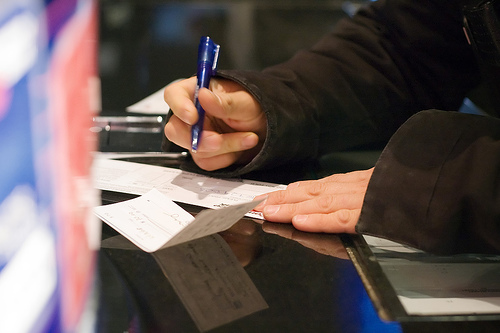 The elections committee fined Guinn and Li Puma $10 for leaving a large campaign sign out after allowed hours. The complaint was brought to the attention of the committee using a cell phone picture taken by presidential candidate Deep Badhesha.

“It’s really great that we’re one and a half weeks in, almost halfway done, and this is the first fine we’ve given out,” Elections Manager Lexi Evans said.

Guinn and Li Puma argued against the fine, saying that the board was left out at 4:30 p.m. on a Friday, and that signs were only not allowed on weekends.

The committee upheld their decision.

At the meeting, Guinn and Li Puma also brought up concern over inequality between campaigns. Li Puma stated that the Badhesha campaign has been assigned the Plaza as a campaign spot more often than the rest of the campaigns, which is an unfair advantage due to high traffic on the Plaza.

Evans told Guinn and Li Puma that different campaigns may seem to have advantages or disadvantages over each other on any given week, but that the elections committee has done their best to make it as equal as possible between all campaigns.

“It’s never going to be exactly equal,” Evans said. “But I have no control over that, it’s just how math works.”

The meeting wrapped up by discussing the debate between all campaigns, scheduled for Wednesday April 2, at 7 p.m. in the Lory Student Center Theater. All candidates will discuss current issues and answer questions from students.

Evans is currently satisfied with the performance of all the campaigns.

“As of now they’re all doing well,” Evans said. “The big debate is tomorrow, so we’ll see how they handle that.”