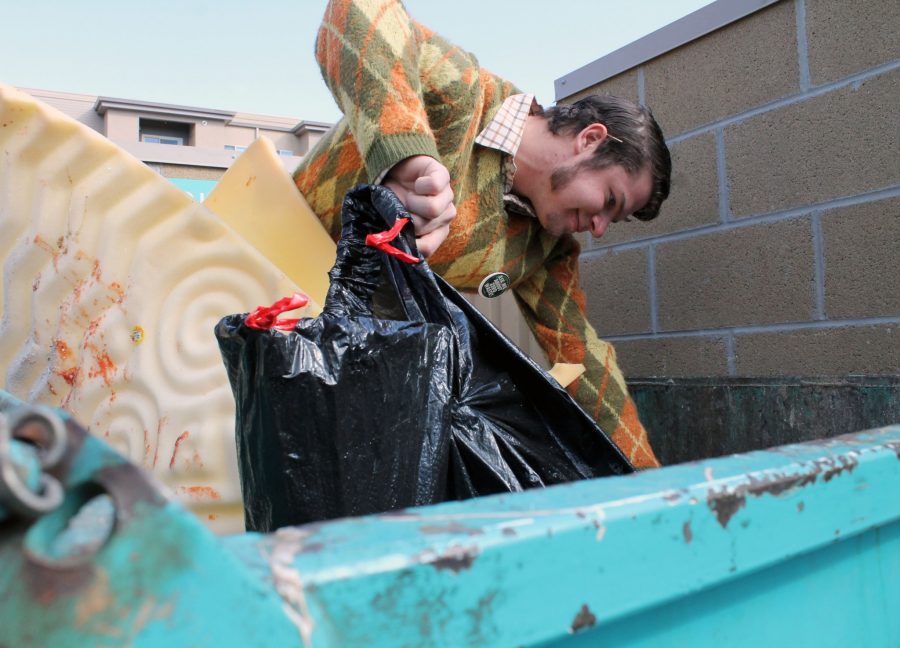 John Rooss, a soil and crop science major and organic agriculture minor, searches for goodies in his neighborhood dumpster. According to Rooss, in addition to using his findings for personal projects he also recycles and composts items that he finds.

Late at night amidst the trash bags, pizza boxes and broken bottles, some people are doing their grocery shopping.

Dumpster diving is an alternative lifestyle for people passionate about eliminating waste in America and in Fort Collins.

“It’s really amazing to me that I can resource all the things that I need in life just from the excess and waste of others,” said Johnny Roos, junior soil and crop sciences major. “As the saying goes, ‘one man’s trash is another man’s treasure.’”

Roos is among a community of people in Fort Collins who collect food from dumpsters. He’s found everything from fresh vegetables, steaks, jewelry and money.

“There’s definitely a community. I’ll see people there and we’ll have a good time, just laughing and kicking back, like, ‘Oh, Asian salad tonight or Mexican salad tonight?’”

Dumpster diving is legal in Fort Collins, but only on public property, according to Rita Davis public spokesperson from the Fort Collins police department.

Logistically, dumpster divers, or gleaners as they are also known, have to think about weather, time and safety when on a dive. Winter is apparently one of the best times to go due to the food being in a virtual freezer locker.

“It does involve a lot of diving, not necessarily head first,” Roos said. “You can back flip or something like that, maybe a front flip. And you can’t be wearing your Sunday best, even though I have been.”

For Roos, his reasoning to dive comes from the fifty percent of food wasted in America through the harvesting, transportation and storing processes.

According to the documentary Dive! by Jeremy Seifert, America throws away 96 billion pounds of food each year. Seifert tells the story of divers in California who
attempt to connect the food waste from supermarkets to the rise of hunger.
Seifert’s documentary, Dive! breaks down the three rules of dumpster diving:
– Never take more than you need.
– First one there gets first dibs. (But always share.)
– Leave it cleaner than you found it.
“Zero waste, that’s what we’re looking for. 100 percent efficiency,” Roos said. “Waste not, want not.”

“It’s remarkable what people throw away. We try to limit our food waste as much as possible,” Tracz said.

Corporations and stores against dumpster diving argue that there are many other options to find food in this town.

“The community offers a lot of other ways to find food, they need to look into other opportunities than diving in our dumpsters,” said an assistant manager at Walmart in a statement to the Collegian.

Roos does not argue the many opportunities for people who are hungry.

“I love the companies in this town,” Roos said. “We have some of the best fed homeless people in the nation, in the world, because of it.”

He sees diving more as a “cosmic” act of harvesting waste out of a capitalist system and putting it back in through composting.

Pizza Casbah, which is open till 2:30 a.m. on weekends, sends their leftover pizzas to the homeless shelters. According to manager Rob Saxton, the pizza place has had issues with dumpster divers in the past.

“I’m not cool with it. We never want anybody to get sick,” Saxton said. “I hope nobody does that because you can get awfully, awfully sick.”

Roos has standards when it comes to the food he gets out of the dumpster. It can’t touch the lining, and is usually packaged in plastic bags containing nothing but food.

According to him, there’s a difference between the sell-by date and actual expiration date, part of the reason for excess food waste from grocery stores.

“You can tell with your palate, with your eyes, with your nose what’s not palatable,” Roos said. “I think we were born with that instinct, and that’s something that’s been lost with packaging and commercialization of our food stores.”