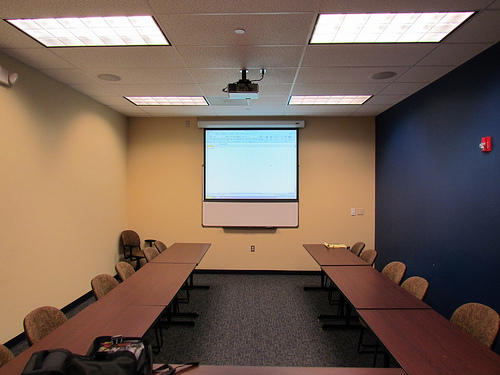 Issues regarding study tools and RamRide were discussed by the the Associated Students of CSU Senate and Executive Board on Wednesday night.

Project Echo 360, a video camera which can records lectures in certain classrooms, was presented to ASCSU officials by Lance Li Puma, executive director of university affairs, who said the system is currently underutilized at the University.

All of Clark A, some of the Engineering Building and various other classrooms around campus have had this technology installed within the past three years. According to Li Puma, many professors do not not use this tool, even though they can submit their lectures to RamCT.

“The technology that is in the room has become stagnant,” Li Puma said, explaining that the training for teachers to use the technology is limited and most do not know how it works.

Li Puma said he will implement a student survey soon to gauge student use of the technology.

In Senate, a resolution was introduced to improve the course test files service offered through student government.

During the session, senators discussed how the test files are not up to date to match student needs.

“[ASCSU] officially endorses the proposal of revitalizing the ASCSU test file… (to) further help put students on equal footing academically and provide the most recent and relevant information to students,” the resolution states.

The bill encourages professors to submit their own tests to the archive.

“If a teacher doesn’t want that information out there, they aren’t going to let it out,” College of Engineering Sen. Evan Mackes said.

According to Li Puma, professors have to work harder when their most recent tests are public material.

“Faculty will want to copyright their intellectual content,” Li Puma said. “Faculty don’t like to have to continually make exams. They don’t want to rewrite it and water it down each year.”

The resolution was passed and sent to the Committee of Teaching and Learning.

In addition, RamRide Executive Director Chelsey Green announced a new feature on the organization’s website (ramride.colostate.edu) that will aid the volunteer application process. Forms that used to be completed on paper at the office in the Lory Student Center will now be filled out online.

According to Green, this will help eliminate lines for volunteers submitting applications.