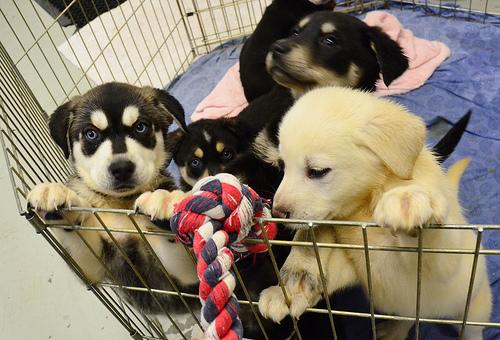 Being a temporary parent for a puppy is the next best thing to fully adopting and taking on the responsibility of being a full-fledged dog owner. Fort Collins’ dog foster program allows people to adopt for a short amount of time and in the process, saves Fort Collins’ dogs as they wait to find a permanent home.

“You can volunteer to just walk or hang out and play with the dogs at a pretty basic level. If you want to go further you can be a ‘canine coach’ and work with dogs with bigger issues to make it so that they can be rehabilitated and re-homed. You can also foster dogs, usually puppies, dogs with behavioral or medical needs, or if they run out of space,” said Emmy Briggs, a volunteer at Fort Collins Animal House.

On top of being able to work with the dogs and give them short term homes, the Animal House also does public outreach and awareness events to fundraise, according to Briggs.

The Animal House was created by  people who were interested in saving the lives of man’s best friend, according to Animal House’s employee Gilliane Rankin.

“The Animal House was founded by two women who were interested in saving lives about seven years ago. Last year 771 dogs found their forever homes,” said Rankin, a former CSU biology student.

The Animal House offers many programs and their ultimate goal is to find happy homes for the dogs. With a vet on staff and many volunteers, the animals are kept in a very comfortable and happy environment until they find stable and loving homes.

“This shelter is really amazing, dogs seem to get adopted out so fast — each week I have to learn a bunch of new faces. They usually adopt out about 10-15 dogs a week. The good ones may only stay about a week. If they have serious issues they may stay longer but they are rarely there much over two to three weeks,” Briggs said.

Animal House relies heavily on their foster program for all dogs because it opens up space at the shelter and allows for the dogs who need more one-on-one attention to get just that,” Rankin said.

“Student fosters are some of the best. They can take puppies for short terms and what works with their schedules. The shelter only can keep on taking in puppies if we have foster homes for the puppies to go to,” Rankin said.

For the shelter to take in puppies, it is required that they have a foster home to go to for several weeks at a time. Rankin said that fostering puppies is popular among volunteers because it gives them a chance to socialize the young dogs and give them love.

Like to Animal House, ColoRADogs was also founded by an individual invested in saving furry friends. Nancy Tranzow, director and founder of ColoRADogs, moved to Colo. after having worked with dogs who had been formerly abused in Fresno, Calif..

A picture convinced her to adopt a pit bull mom named Rue and her puppies and the same photo led to the founding of  ColoRADogs in June of 2012.

“We focus hugely on educating people about dogs, breed-specific legislation (BSL) and outreach. ColoRADogs primarily has pitbull type dogs, but also other dogs and our job is to give them a second chance before finding them a second home,” Tanzow said.

ColoRADogs also has a very prevalent fostering program where dogs of all ages are fostered. The older dogs are generally a six month to a year commitment while puppies are about a two to four week commitment, according to Tanzow.

When fostering a dog, after the application and acceptance process, ColoRADogs and Animal House will send the volunteer home with all the equipment they will need according to Rankin and Tanzow.

Katelyn Ehrler, a sophomore undeclared major, said that when she fosters puppies, she typically has them for about three weeks at a time.

“I have a dog and wanted it to have friends, so I got online and searched for shelters. I ended up picking ColoRADogs because it it very foster based,” Ehrler said.

Animal House and ColoRADogs are on a mission of finding dogs homes with loving, responsible individuals, and in the meantime, are giving them short term homes where people treasure them.

“Often their whole personality and behavior will change when they realize that they are with people that love them and will care for them,” Briggs said.