Cold temperatures remain in Foco for the week 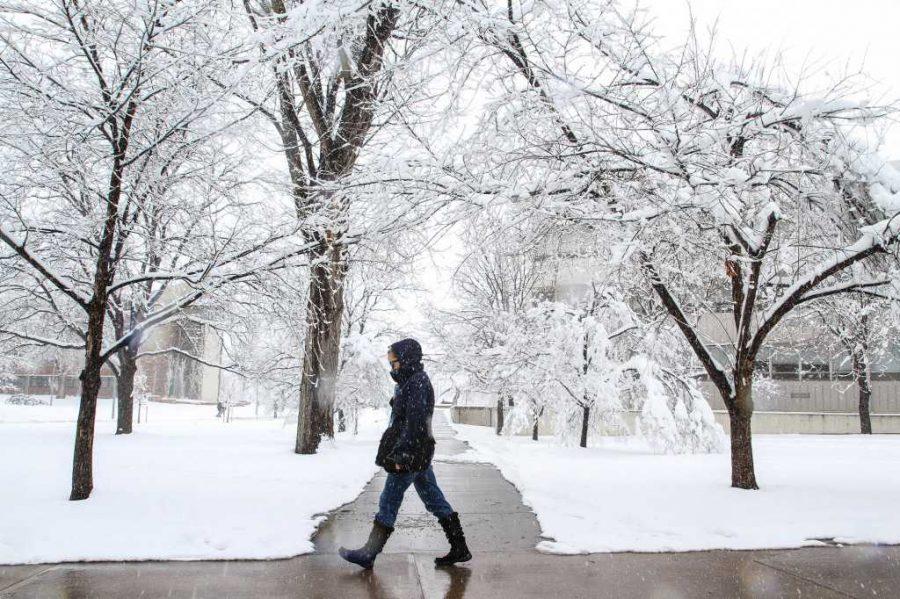 Journalism graduate student Natalie Hansen walks home in the snow after class yesterday afternoon. With the recent snow the past few weeks, some students are starting to second guess their decision to attend school in Colorado.

Yesterday, CSU students could be seen trudging around campus, shivering beneath layers of heavy coats, scarves, hats and other gear. The chilly temperatures and harsh winds that caused this discomfort may be staying for the rest of the week, according to the National Weather Service.

A high temperature of 6 degrees is anticipated for today, a high of 11 degrees tomorrow and 15 degrees for Saturday. Winds are predicted for today and tomorrow as well.

However, there may be a short break from the actual snow on campus. The City of Fort Collins tweeted yesterday that they would continue snow removal throughout last night. Tonight, there is only a 10 percent chance of snow.

Because of these temperatures and winds, some students may be hoping for a day off this week due to weather. However, because of set guidelines the university is cautious with its decisions.

“Living in Colorado means living with snowy weather, and, unless weather is extreme and street crews are unable to keep up with clearing the snow, the university will likely stay open,” stated a health and safety report on Today @ Colorado State.

Though the freezing weather may be somewhat of a discomfort, there are some CSU students that have found the silver lining to the snowfall. For the entire day yesterday, students from the CSU student chapter of the society of American Foresters stood outside the Warner College in the cold to sell Christmas trees to passing students.

According to American Foresters member Caroline Carlson, the students go out every year and sell trees in order to raise money for their annual national convention. Carlson stated that the weather was worse than in previous years, but that it did not dull anyone’s spirits.

“It’s a good time to be outside with friends and talk about trees,” Carlson said. “It’s a lot of fun.”

For CSU students that do not hold the snow in such a positive light, this weekend may be the time to escape from Fort Collins and head home. The NWS states that there is a chance of snowfall on both Saturday and Sunday.

However, once students return to class on Monday, the temperatures are predicted to steadily climb. Monday, Tuesday and Wednesday are expected to see high temperatures of 17, 27 and 39 degrees.