Jessa Salvador,13, presents her battle with leukemia to CSU 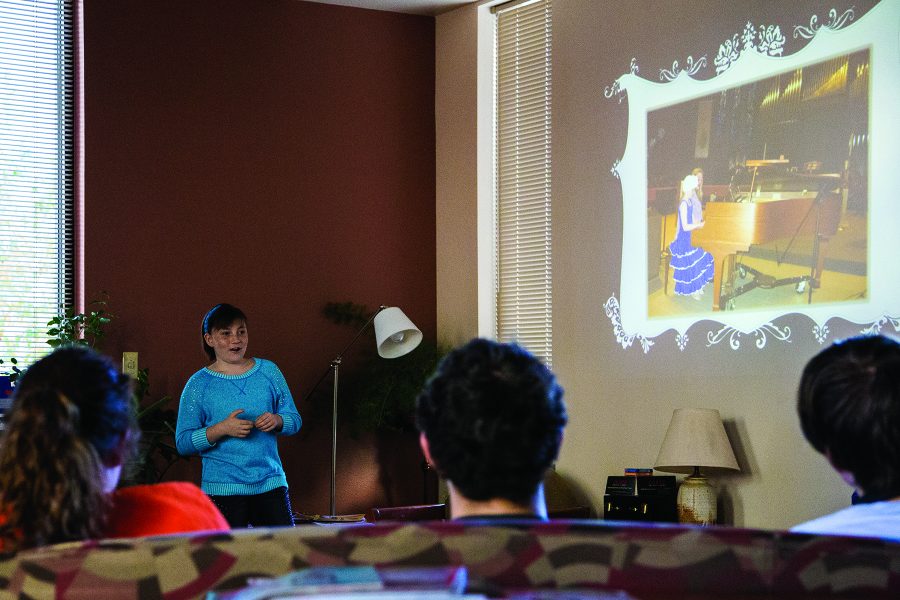 Jessa Salvador speaks to students about her experience with a leukemia relapse Sunday aftenoon, in the Academic Village. Jessa routinely participates in speaking engagements about leukemia, as a means of raising awareness and encouraging people to volunteer in many ways.

Adorned in sparkles from her sweater to her boots, a 13-year-old girl watches CSU freshmen honor students file into the Academic Village fireside lounge for a presentation about living with leukemia. The speaker starts her presentation with a wave to the students and the students smile back at her.

Jessa Salvador was diagnosed with leukemia, cancer of the blood cells, at age 3. She went through three years of treatment and was in remission for five and a half years. On Nov. 8, 2011, Jessa relapsed.

Since then, she has completed her stage of high risk, high dose chemotherapy and will hopefully complete the maintenance stage of her chemotherapy in early April 2014.

Speaking in front of 12 students, Jessa shared her story, titled “A Journey of Survival.”

“It’s pretty scary, but it’s copeable,” Jessa said of leukemia. “You can get through it.”

This optimistic attitude and the hope to change perspectives drive Jessa and her mother, Jennifer Salvador, to speak about Jessa’s experience with cancer.

“We’re just hoping to make people more aware of bone marrow registry and then just to help freshmen know that you can get through anything,” Jennifer said.

Jessa and her mother created a powerpoint to illustrate Jessa’s experience as a cancer patient. Her message of hope is conveyed through stories and photographs that help tell Jessa’s story.

“People in chemo feel like maybe people don’t understand. So with the pictures, I think it helps them realize,” Jessa said.

With each presentation she gives, Jessa said she hopes attendees consider becoming a member of the bone marrow registry — committing to donate to any patient in need if you are a match. The site she supports is BeTheMatch.org.

Jessa has given talks at CSU and other smaller venues before, but she will be a keynote speaker at the Relay for Life event in June.

“She touches the heart of everybody. I don’t think you’d leave her presentation and not acquire anything,” said Pam Knaus, teacher at CSU and close family friend of the Salvadors. “She’s a rockstar.”

“I know that they are going to get through it because they are so happy about everything. They aren’t the kind of people that let (cancer) get them down,” McGowan said of her friend and Jessa. “I think being an optimist about it really helps you fight it better.”

Jessa has been an optimistic, happy kid from the start, with and without cancer.

Jack Knaus, Pam’s son, has grown up with Jessa. He is in the same grade, attends the same school, and was on the same elementary school baseball team as Jessa.

“She had a pink bat and a pink helmet,” Jack said. “She has been very strong and optimistic about (cancer). She proves that people can get through things without feeling too bad.”

Pam Knaus sees this optimism as “making lemonade out of lemons.”

“This whole situation is crappy from start to end, but then again,” Knaus pauses and smiles. “She’s got these great stories.”

Jessa tells one story of her treatment with beads she received from the Children’s Hospital in Aurora where she is treated.

“They give you a colored bead for everything that happens, so they all mean something,” Jessa said. “Like black is for getting poked, and this is for losing your hair, and red is for getting a blood transfusion.”

Jessa has made necklaces out of the beads she has collected through her treatment. She said she doesn’t wear them because there are too many and they weigh too much.

She does bring them to her talks, though.

“I like to show people how much I’ve gone through and what’s happened,” Jessa said.

“Do you remember what the rainbow ones were for?” Jessa asks her mother.

“You know what, that was a big thing — what was it? The start of treatment?” Jennifer responds.

“No, because that’s the heart,” Jessa says.

“Oh there’s four. So what have you had only four times? Surgeries?” Jennifer asks.

Jessa has beads representing years of burdensome treatment, chemotherapy and surgeries, but she still ended her presentation with a wave and a smile. She thanked everyone for listening to her and for coming out on a Sunday, but at the end, it was the 12 students listening who thanked her.