Glow in the Dark Charity 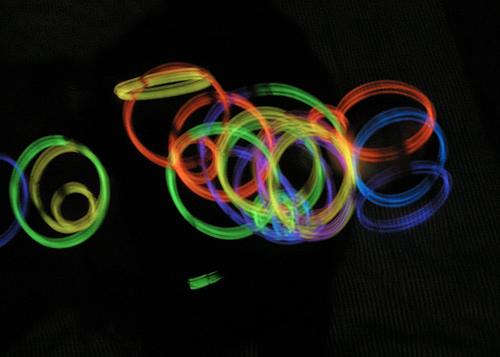 The South College Gymnasium came alive on Friday night for a glow in the dark volleyball tournament hosted by Alpha Sigma Phi.

While the atmosphere resembled a dance party, with the gym completely blacked out, music playing through the loud-speakers and team members lit up with glow sticks, the tournament was actually one of two philanthropy events held by the fraternity each year.

“I wanted to do something different,” said Colin Roberson, director of philanthropy for ASP and a sophomore math major. “Our national chapter does a volleyball tournament each year and I had never been to one that was glow in the dark.”

Ten teams competed for fun and to help raise money for the Ronald McDonald House. One of five charities supported by Alpha Sigma Phi, the organization provides “a home away from home” for families to stay close when their children are hospitalized, according to their website.

The event reflected the goal of Alpha Sig, according to Nick Patenaude, vice president of ASP and a senior business major.

“Our goal is to better the man and it’s all about making your tomorrows better than your yesterdays,” Patenaude said. “This event gave everyone the opportunity to do something that they enjoy, but also better the community. It shows that we are giving back.”

Patenaude worked closely with Colin Roberson in order to organize and promote the event, and for him the semester philanthropy events are his favorite part of Greek life at CSU.

“I really do believe in the Greek way of life,” Patenaude said. “Events like these help detract from the negative stereotypes associated with it.”

In addition to the proceeds donated to the Ronald McDonald House, the winning team got the chance to donate five percent of the proceeds to a charity of their choice.

Janelle Hilmes, a sophomore dietetics major and captain of the winning team “Sets on a Beach”, enjoyed the chance to play volleyball for a good cause.

“Of course we wanted to win, but we were just there for fun and for charity,” Hilmes said. “It was really, really fun. It was dark and there were lights on and music playing. It was a really cool atmosphere and everyone was excited to be there.”

Alpha Sigma Phi plans on hosting the event next year, and has plans to host a puppy petting event for the spring semester.

“It was a good experience,” Roberson said. “It was awesome to see all the Alpha Sigs working so hard together. We are all looking forward to next year being bigger and better.”

Collegian reporter Natash Leadem can be reached at news@collegain.com