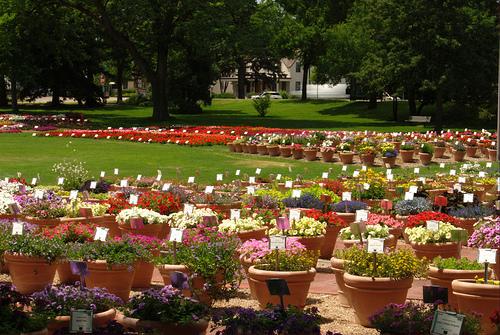 Things are quieting down over at the CSU Trial Gardens located just west of the University Center for the Arts. Employees who just weeks ago were putting in 40 hour weeks to keep the beds of annual ornamentals looking their best are now pulling up the last of the plant debris and putting the garden to rest for the winter.

“It’s a lot quieter in the winter, which is nice,” said Jessica Miller, a sophomore horticulture major who spent much of this summer weeding the gardens. Though Miller is ready for the growing season to be over, she was happy to gain some hands-on knowledge of new species of flowers.

The CSU Trial Garden is managed by Dr. James Klett of the horticulture department and maintained by a handful of student employees. The garden couldn’t have a successful season without all the volunteer hours put in by several Colorado Master Gardeners (CMG). These volunteers play a large role in spring planting, plant maintenance and judging, according to Klett.

“Overall, each year, CMGs spend hundreds of hours volunteering at the Trial Gardens and PERC. They really enjoy working with the students and getting their hands dirty and, of course, knowing they are assisting with research,” said Alison O’Connor, CSU extension agent and Larimer county CMG coordinator.

While several students use the garden’s path as a scenic short cut between main campus and the performing arts building, it is a little known fact that the CSU Trial Garden is an important experimental plot for the horticulture industry. The garden functions mainly as a testing ground for the latest and greatest ornamental plants and flowers, according to Dr. Klett.

“The plants on display are not available to the public. They are either new introductions or improved varieties,” said O’Connor. At least a third of the varieties grown in the garden are new each year, according to Dr. Klett.

Plant breeders and greenhouse managers use the trial garden to test their new plant creations in hopes of discovering “the next big thing,” according to O’Connor.

“There’s a surprise every year,” said Gene Pielin, operations manager at Gulley Greenhouse in Fort Collins. ““You find the hidden gems and you find the weaknesses,” said Pielin, who has been in the horticulture industry for nearly 40 years.

Dr. Klett and nearly 90 other judges compile “Best of…” winners in several categories including Best in Show, Best New Variety and Best Novelty. This information is sent out to members of the industry who use the results to make business decisions for the coming growing season, according to Dr. Klett.

So, while most of us are worrying about buying this year’s Christmas tree, the greenhouse industry is considering what types of petunias to grow in 2014.

“Literally all of our work (planning for next season) is done by January. We’ve already decided what plants we’re going to grow, and many companies have already placed their orders,” Pielin explained. Aside from selling their plants locally, Gulley Greenhouse is a large wholesale greenhouse that supplies plants to several garden centers across the country and internationally.

“We’re always adding new varieties (to production), and we like to use varieties that do well in Colorado,” said Pielin, who is a member of Dr. Klett’s garden advisory committee.

Typically, members of the industry travel to several trials across the country, and CSU’s trial ranks near the top.

“I’ve seen trials in other states, and it’s been told to Dr. Klett that his gardens are the best in the nation. I would agree,” O’Connor said.

Over the past 15 years, the trials have expanded beyond a few hundred annual flowers to more than 1,200 annual and perennial plant species grown in a variety of containers, beds and shade structures.

“We probably have, through lots of hard work by faculty and CSU students, one of the best university-based trials in the country,” said Pielin, who travels to trials in California and Ohio each year.

After several years watching and assisting with the CSU trials, O’Connor has seen the direct role the trials play in what plants end up in gardens both here in Fort Collins and around the world.

“As (CMG) coordinator, I can see the long-term benefits and end results. These are plants that consumers will eventually use in their own landscapes,” said O’Connor.

In case you want the complete inside scoop on what to expect on the greenhouse shelves next spring, the 2013 trial results can be found at www.flowertrials.colostate.edu.