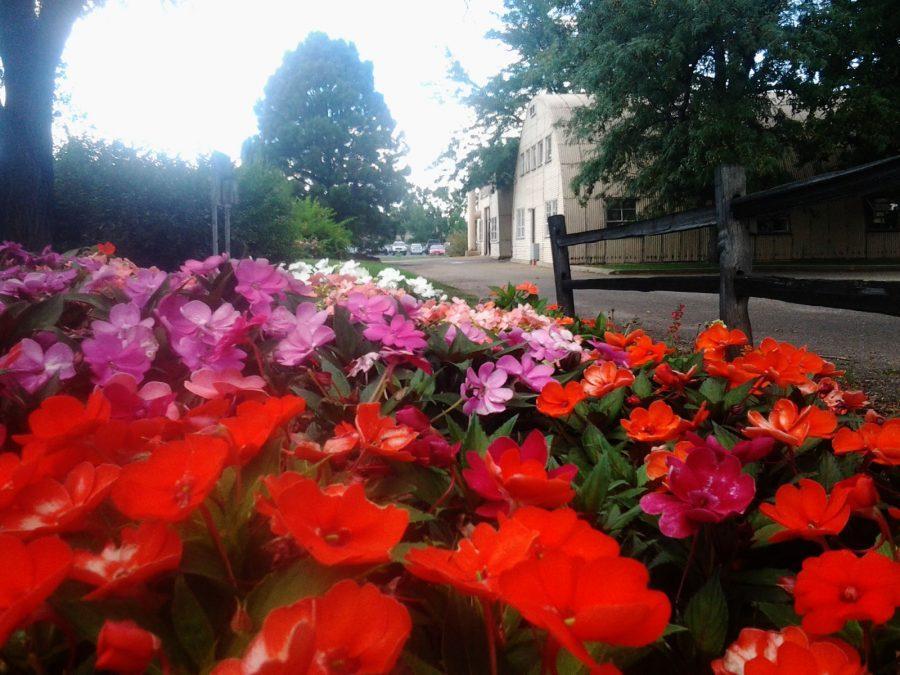 The sustainable farm, gardens, and greenhouses on the North West side of campus, greatly enjoyed by CSU students, may soon disappear with the construction of the new stadium.

Colorado State University is not only the most sustainable college campus in Colorado, but with a STARS score of 77.73, CSU’s 2011 report put us as the top sustainable campus in the country.

The Sustainability Tracking Assessment and Rating System is a detailed scorecard for college campuses in terms of sustainability. The certification process is self-reported and ranks campuses on a number basis that puts them in the category of bronze, silver, gold or platinum.

The University of Colorado Boulder, like CSU, received a gold ranking but with a score of 68.77, CU comes in with a significantly lower score. As of a 2012 report, Georgia Institute of Technology ranks at 78.45.

There are three judged categories in the STARS report: operations, education and research, and planning, administration and engagement.

With curriculum and research concerned with sustainability, CSU scored highest in the education and research portion of the report. The university scored lower in operations compared to the other two categories.

The operations section of the report evaluates the ways in which the campus runs – everything from energy and water usage to efficiency of buildings, to means of transportation to, from and on campus.

“(In) operations we scored a whopping 39 percent which is not really anything to write home about,” said Carol Dollard, energy engineer for the university. “They just sets the bar really high. Last time I checked, the highest score in operations was a 56 percent.”

Looking at the data from over 260 institutions who participate in this evaluation, a 39 is right at the average, according to Dollard.

“As much as we like to think that we’ve done all these green things on campus … it is really the academic, research and administrative pieces that make CSU stand out as a sustainable university,” Dollard said.

Among other things, operations also includes the energy and water usage of a campus, waste reduction and efficiency of buildings.

“We have some (buildings) that are higher performing than others on our own campus and certainly in comparison to other campuses,” said Stacey Baumgarn, campus energy coordinator.

CSU beat CU in this category by two points.

The sustainability of buildings on campus are measured by the Leadership in Energy & Environmental Design (LEED) scorecard.

No rating at all or a rating of certified, silver, gold or platinum can be awarded to a building that goes through the certification process. The higher the rating, the higher the efficiency of the building in question.

The revitalization that nearly doubled the Rec Center’s square footage was an especially successful project, according to Mike Rush, university architect and manager of design and construction.

“The mechanical systems were so inefficient when they were originally installed, we were able to add that amount of square footage without much change in the energy usage,” Rush said.

Normally, this amount of added space would cause a building’s utility bill to increase, but this was not the case and seems to be a trend of CSU as of late.

“We’ve added lots of square footage, lots of buildings in the last couple of years, but last year, the amount of electricity we used on campus actually went down,” Baumgarn said. “That’s partly because we are building better, smarter, higher performing buildings.”

Buildings on campus have yet to receive a platinum certification.

The Pavilion, or commons building, of the currently-under-construction Laurel Village is anticipated to be certified platinum, thanks to its piece of green roof and naturally ventilated cooling tower, according to Dollard. Laurel Village is scheduled to be completed by next fall.

The next STARS report will be submitted by the university by October 2014.

“The score is a reflection of Colorado State’s 140 years of environmental research, a strong commitment to advancing understanding of sustainability and human impact on our global environment,” Frank wrote.