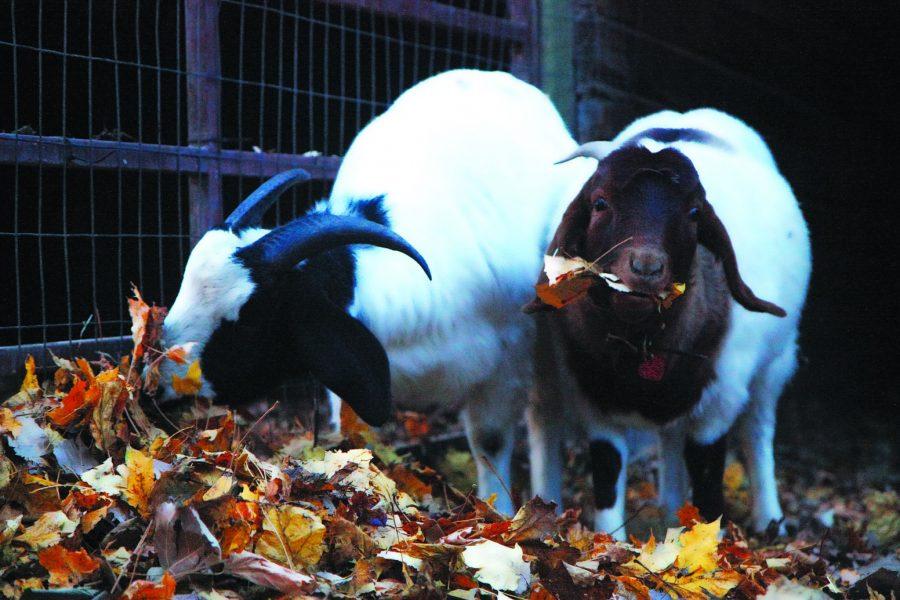 Fort Collin's Leaf Exchange program typicaly connects people who need to get rid of leaves with those who need leaves for composting. But for Jennifer Graff, the leaves she rececive go to feeding her goats who love the crunchy texture.

Because of Fort Collins, goats can now happily munch away on the leaves at Rosemary Graff’s Laughing Buck Farm.

The Fort Collins Leaf Exchange Program, an online platform on Yahoo that started in 2004, connects people who are looking to find a use for their fallen leaves with those who need them.

Graff, who co-owns Laughing Buck Farm with husband Gregory Graff, a professor in the agricultural economics department at CSU, is a participant in the leaf exchange program.

Graff found out about the program through Facebook, where she had posted that the farm was in need of leaves for bedding the animals and food for goats.

“We fill the empty stalls with bagged leaves and the goats eat ‘em like you would a bag of potato chips,” Graff said.

Laughing Buck Farm sells chicken eggs, goats’ milk, homemade soap and also is home to a farm school for children. The farm is located right outside of the city limits west of Fort Collins. Classes run at $20 for a three hours of milking goats, feeding the pigs and working in the garden.

“I don’t know anybody until they show up with their leaves,” Graff said.

The farm has recently reached capacity of leaves needed — over 60 bags of a stockpile to use through the fall.

People like bringing their leaves to the Laughing Buck Farm because they get to see how they’re being used.

“We teach the kids that the farm is a cycle,” Graff said. “Things that other people will throw away because they have nothing to use it for, a farm can use it.”

With a small staff and budget, Susie Gordon, senior environmental planner with the City of Fort Collins, said the idea of the leaf exchange program was inspired by Freecycle.org.

Freecycle operates on the same premise of Craigslist where all contact begins on an online platform. From chairs to berries to pool toys, one can find and post stuff they want or need.

“Freecycle was a grassroots thing that started up in other parts of the country and it just spread like wildfire,” Gordon said.

According to Gordon, Freecyle.org has a big base in Fort Collins and Loveland, where people get rid of anything from couches to an abunadance of berries.

The Fort Collins Leaf Exchange program works on a similar platform through the use of Yahoo Group pages where anyone can make posts based on what they’re looking for.

“You can kinda connect people who need stuff with people are trying to get rid of something,” Gordon said. “This is a really elegant way it works to put people in direct contact with each other.”

The City of Fort Collins has to do minimal moderation for the site to encourage civil behavior and to monitor spam or profanity.

“It serves a growing audience of people who know how to navigate this type of website exchange. For people who are into Craiglist or Amazon can just figure it out,” Gordon said.

The City of Fort Collins has a completely privatized trash collection system, where leaf collection is not always offered like other cities are moving to do. The Leaf Exchange program provides a resource for people who are looking for an alternative to the landfill.

“You have the comfort that your leaves are being put to good use,” Gordon said.

Hagemen Earth Cycle, an organic recycling landscape supply company located on Prospect, is one of the alternatives for the community of Fort Collins to bring their leaves for a small price.

According to Karen Horner, manager at Hagemen’s, a car load is $4, a small truck or mini-van runs at $5.75 and full-size truck is only an additional $2 more.

“We charge a fee to drop off yard waste,” Horner said. “That would be whatever they have in that particular load. Then we grind it and haul it off to a recycling center to be turned into compost.”

“People are saying this is better than Hagemans, because Hagemans is gonna charge them,” Graff said. “Or at the landfill or the dump — again, they have to pay, and they hate to see the leaves go to waste.”

Another program encouraging organic farming or composting is the Fort Collins worm exchange program, hosted year-round online. The red wiggler worm, in particular, is one used for composting and can be cultivated in what is called a ‘worm bin.’ People in need of worms can make a request on the site and get involved easily.

“People get really into cultivating them,” Gordon said. “And then people who are looking for worms can get started with a batch of baby worms.”

Platforms such as the leaf and worm exchange, as well as Freecycle.org, can act as simple solutions to reuse, reduce and recycle the waste of the community.

“These are a fabulous way for people, and any college student, who want to be as thrifty as possible,” Gordon said. “It’s a very small investment of the city’s time and resources.”