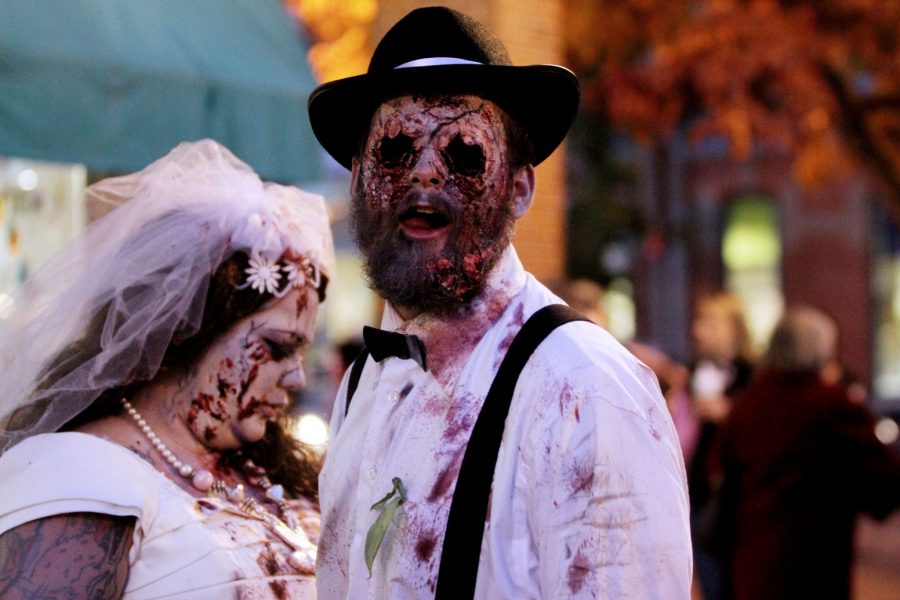 The Fort Collins Zombie crawl does not draw out amateurs, but rather dedicated locals who masterfully create the most gruesome and authentic looking zombie costumes. Several businesses, such as Brand Spanking New thrift store in Old Town, offer professional make-up services to anyone wanting to look frighteningly undead.

Last year the annual Fort Collins Zombie Crawl raised approximately $37,000 from its undead customer base, and according to Nathan Scott, creator of the event, this year looks just as promising.

In what has quickly become a yearly tradition, local businesses in Old Town opened their doors to the undead in a unique fundraising event for Turning Point, a local non-profit organization centered around providing services to families and youth in the community.

During this year’s Oct. 19th crawl,  a hoard of zombies filled the streets and the lines to several local bars and restaurants stretched out to the curb.

According to Scott, community outreach coordinator for Turning Point, whether or not people realized it, by attending and supporting the event they were supporting the Fort Collins community.

“A lot of people may have come down (to Old Town) and had a great time, but they didn’t know what it was for,” Scott said.

Turning Point has been a part of the Fort Collins community for over 40 years and provides various resources to disadvantaged families and youth. Its services range anywhere from crisis intervention and therapy sessions to long term treatment programs and mentoring.

“I don’t think that a lot of people really know the extent of the services here at Turning Point,” said Paul Christenson, business and development director. “We provide important services to kids and families in the community in order to keep them together.”

The Fort Collins Zombie Crawl was started four years ago when Scott started brainstorming a fundraiser that would be fun and involve businesses in Fort Collins. The goal was to be different.

“There are so many different fundraisers in Fort Collins,” Scott said. “The inspiration was to really do something unique and fun that Fort Collins hadn’t really had.”

Inspired by other zombie crawls, Scott began researching and submitted a proposal to his superiors.

Christenson, an 18-year employee for Turning Point and now a committee member for the event, remembers Scott’s proposal.

“It was unknown at the time,” Christenson said. “We just weren’t quite sure if it would be successful.”

While the proposal was met with hesitation at first, Scott gained support from the organization and began going door to door to the different businesses in Old Town. He received support from over 24 different vendors the first year.

This year 56 vendors participated, agreeing to donate products to the fundraiser. Zombie participants that bought a wristband through Turning Point were entitled to one item at five different businesses of their choice.

“I feel really blessed by the support of the businesses that were a part of the crawl,” Scott said. “Without their support we would have no crawl at all.”

“I got a call last year from a small business called Flamingo Boutique and the owner told me that over 60 people came in that would not have come in without the crawl,” Scott said.

As one way to kick-start the Halloween festivities the Fort Collins Zombie Crawl has become popular with the CSU community as well.

“I don’t think the zombie life is really for me,” McMahon said. “Mobility is very important to me.”

Stephanie Coronado, an agricultural and animal sciences major, attended the crawl for the first time this year with her younger sister and parents, and has intentions of coming back.

“It’s fun seeing everyone out there in these crazy costumes,” Coronado said. “We’ve recruited more people to come next year.”

Turning Point has also made plans to continue the crawl and keep the zombies coming back to the streets of Old Town.

Collegian Reporter Natasha Leadem can be reached at news@collegian.com.