Ski season begins before the end of autumn 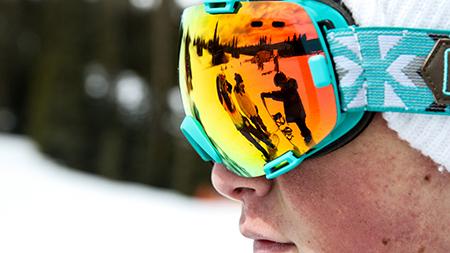 Kyle Bodley, member of CSU's Snowriders joins forces with Kids at Heart to take foster and adopted children up to Eldora Ski Resort on Saturday. In the reflection of his goggles two volunteers talk to one of the children about his experience learning how to snowboard. The day started off with ski and snowboarding lessons from Eldora instructors, and after lunch the children joined the Snowrider volunteers on the slopes to show off what they learned.

Arapahoe Basin or Loveland are usually the first mountains to open in not only Colorado, but the entire nation. This year was no different with Arapahoe Basin opening Oct. 13 and Loveland opening just four days later, both with 18-inch bases.

“The response from folks skiing and snowboarding and from the resort staff is that the conditions feel more like mid season than early season,” said Patrick Byrne, public affairs manager at Colorado Ski Country USA. “It really looks like mid-winter and that’s a promising sign for sure.”

Arapahoe Basin opening first this year marks a four year win streak for the mountain. Arapahoe Basin and Loveland ski areas are just on opposite sides of the Continental Divide and are known for their friendly competition of who can open first.

“It’s great publicity for both of them and especially whoever gets to open first,” Byrne said.

Although the competition is intense, as winning means added publicity, it is still very friendly.

“They are our neighbors,” Schaefer said. “They’re our friends and we wish the best for them this coming season.”

Another common pass for students is  the Rocky Mountain Super Pass Plus, a $379 deal that includes unlimited days at Copper Mountain and Winter Park, six days at Steamboat and three days at Monarch.

Byrne said students are given many discounted prices at almost all mountains and can find discounts and deals in other ways, too.

If you have a trust fund, choose to opt out of classes for the semester and have an unhealthy affinity for the slopes, the Gold Pass is for you. Coming in at a modest price of $3,000. The Gold Pass allows its owner access to 20 Colorado Ski Country USA  Member Resorts for the season with absolutely no blackout dates.

“The resorts will often times offer last minute deals and savings through their social media so really all of the kids at CSU should be following all of their favorite resorts on Facebook and Twitter and whatever else,” Byrne said.

Collegian Reporter Laren Cyphers can be reached at news@collegian.com.