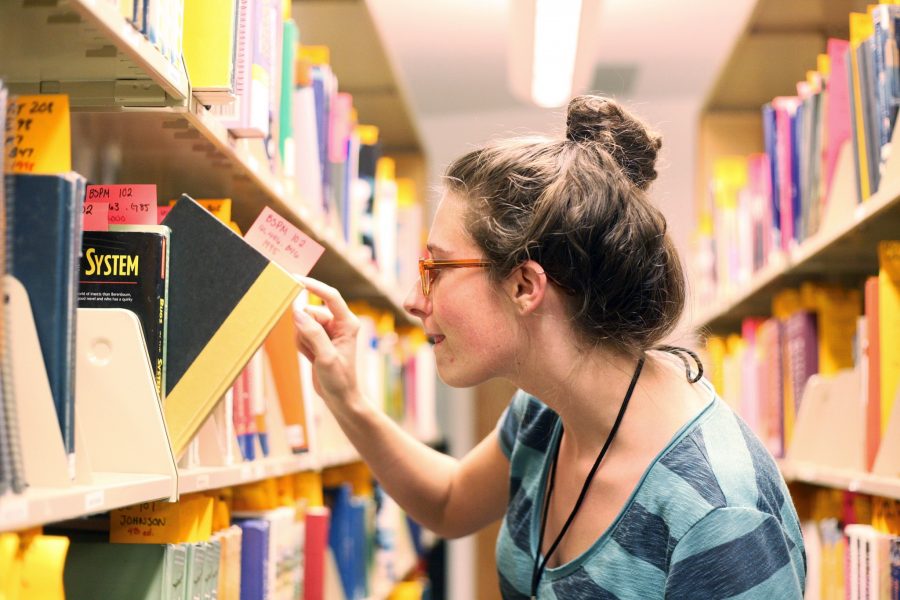 Junior English major Alex Pinion searches through the textbooks on hold behind the front desk of the Library Sunday night. Pinion, a work study student, has been employed with the Library since her first year at CSU.

From searching for jobs, attempting to get hours while competing with other workers, or even obtaining a work study award itself, students go through a lot to get hired.

Work study provides students with part-time jobs that can help lessen the overwhelming costs of attending CSU. From lab assistants to web developers, work study positions allow recipients to hold an on-campus job for no more than 20 hours a week.

Those who are able to find and obtain work study jobs are in the minority. In an email to the Collegian, Frank Martinez, assistant director for student employment, said that only 1,600 of the 30,700 students at CSU are employed through the program each year.

Students in the program typically receive $2,500 per year or $1,250 per semester. However, some students have trouble locating jobs that can pay them because there are only a specific amount of funds allocated for the program.

In an email to the Collegian, Martinez said, “we also have limited work-study funds that we can award on request. We have used all funds for fall 2013.”

Within work study, there are two different kinds of aid that students can apply for: need-based and merit work study.

According to Student Financial Services, to qualify for need-based work-study, students must submit the FAFSA and demonstrate financial need.

For those who do not have financial need, they must submit the merit work-study application to be considered.

Andrea Romero, a junior at CSU, received work study her freshman and sophomore year, but was not granted the position this year.

“I worked at the University Center for the Arts at an entry level position just ushering and taking tickets, but later moved up to a sort of manager position,” Romero said

“I really liked my last position, but I had to stop working there because (my manager) didn’t have the budget anymore … so she referred me for a job in the main office. I was offered the position and had to turn (it) down because I wasn’t awarded work study for this semester,” Romero said.

Although she did not receive the work study position, Romero now works off campus and enjoys the perks of being able to personalize her hours, a choice not available through her work study job.

“With the amount (of money) I had allotted per semester, the hours I could get per week, and having to compete with everybody else that had work study, I actually didn’t make that much money so it was kind of hard,” Romero said.

According to Student Employment Services, there is not a problem with work study positions being unavailable to students.

“Students can find a majority of job postings on RamWeb, but we also have a list of other job postings campus-wide on our (Student Employment Services) website,” Martinez said.

However, according to Ananda Luttet, the program manager for the Journalism department and prospective employer of work study students, the jobs she hires for often do not get posted on RamWeb.

“We try to get our students from word of mouth from people who are already working within the department or maybe from class announcements,” Luttet said. “We prefer to do it that way because its more of a relationship.”

Employers have the ability to decide within their own departments which positions they give to work study recipients and which they will offer to the general student body.

Being that over half of the student’s paycheck comes from a work study account, employers have monetary incentives to choose to hire students with work study.

“Every department does it differently but as long as I’ve been here, I can’t recall hiring any non-work study students,” Luttet said.

Collegian Staff Writer Lauren Rullman can be reached at news@collegian.com.