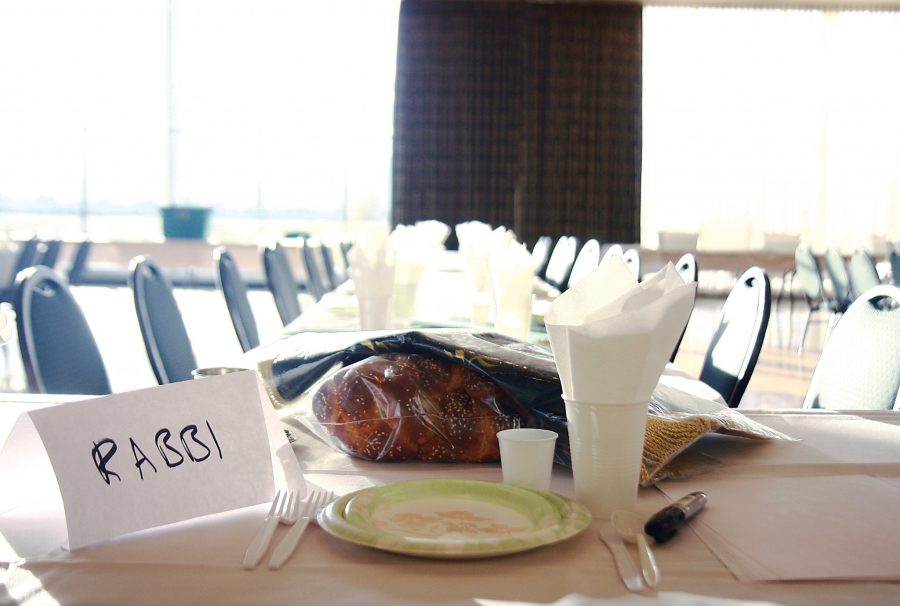 Lechem bread lies ready to be blessed by Rabbi Yerachmiel Gorelik as the sun sets on the West Ballroom last November, indicating the start of the Shabbat dinner.

“One of the main challenges that Jewish students have here is being a minority,” said Rabbi Yerachmiel Gorelik, who leads Chabad’s services and has a beard that Chabad participants claim rivals Tony Frank’s. “As such, we try to create an atmosphere here where they can still feel connected to the wider community… without feeling like they have to sacrifice their Jewish identity.”

Shabbat 200, in its 7th year at CSU, will be an amplified version of a Chabad Shabbat dinner. There will be an enormous amount of food — part of the LSC kitchen will be koshered in order to prepare enough traditional Jewish food for hundreds of people.

Molly Resnick, an NBC producer and journalist who reconnected with her Jewish roots later in life, will be the guest speaker.

A traditional Shabbat dinner involves prayer, singing, and other rituals such as hand-washing and the Rabbi’s blessing. By the time they reach college, most life-long Jews have these traditions and recitations memorized.

However, most notable to outsiders is the Shabbat food — plenty of challah, a Jewish braided bread, is available before the meal’s several other courses.

Gorelik said that Shabbat 200 serves to promote both Jewish pride as well as campus diversity.

Although Gorelik labels Judaism a private religion, he said that Chabad does try to be a partner in diversity.

“Jewish pride is really what I focus on,” Gorelik said. “One should always be proud of his heritage. We think that promotes diversity on campus, and cultural awareness. In general, the more human beings know about each other, the more acceptance there is, and the more world peace there is.”

Although Gorelik said that Chabad’s large events tend to promote diversity, many Chabad participants said that the organization’s weekly Shabbat dinners create a kind of Jewish community that feels like a family within the large, diverse campus.

“(Chabad is) like home. I was actually pretty excited all week to come to Shabbat dinner,” Mehrian said. “I grew up my whole life, every Friday at home we would have Shabbat dinner. It would just be weird not to have it in college.”

Marishel Diaz, a junior foreign language major, agreed with Mehrian — what she enjoys most about Shabbat is the community, especially in a town with a relatively small Jewish population.

“What I appreciate the most is that it’s like my home away from home,” Diaz said. “That’s how they make me feel.”

Rabbi Gorelik said that he, too, feels like the Chabad group is his family, particularly because of how impressed he is by the students’ commitment to pursuing the Jewish faith and maintaining their heritage.

“The best way to describe it is that I’m far away from my family (in Australia), but these students are my family,” Gorelik said. “I love their energy, their devotion and their passion — and I’m proud of them and the choices that they make … it’s so inspiring for me.”

Yitzchak Brown, a Chabad participant, demonstrated the devotion and passion that Gorelik referenced by spending time in Israel last year.

Brown did so nearly free of charge through a scholarship program to help Jewish students study in Israel — Gorelik strongly supports this program and encourages Chabad participants learn more about their heritage.

“It’s all about the community — it’s all about the friendly, welcoming atmosphere that the rabbi and his family provide,” Brown said. “I learned more in my six weeks in Israel about Judaism and my people than I had in my whole life.”

Being a Jewish minority at CSU