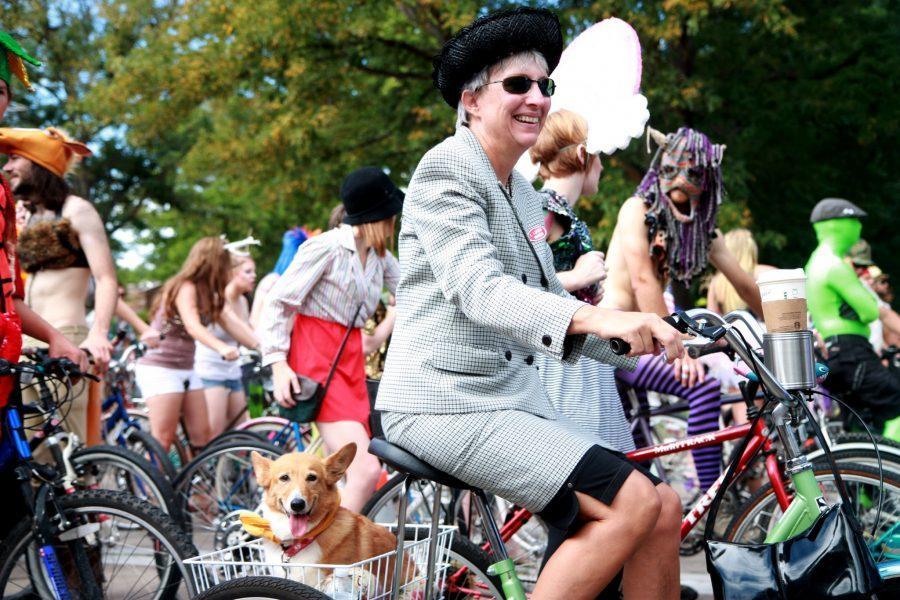 Kathleen Holland carts her dog, Jones, around Old Town on Saturday during the Tour de Fat.

In the past two years, Fort Collins has landed itself on several “Best of” lists country-wide.

From making the top 10 list of best vacation cities for beer lovers by Yahoo!Travel.com to being rated a Platinum Bicycle Friendly Community by The League of American Bicyclists, the small northern Colorado city may have more tourists than residents realize.

Each year, the number of tourists in Fort Collins increases immensely. The ratio of locals to tourists on the brewery tours is about 60:40, according to Bryan Simpson, spokesperson for New Belgium Brewery.

“Often times they come here and fall in love with the place,” Simpson said. “There are a lot of people that come to Fort Collins not just for the beer, but biking and rafting; it’s generally a positive experience for them all around.”

The city of Fort Collins was also rated seventh on Forbes list of Best Places for Businesses and Careers and was rated one of the top 10 best places to retire in 2012 — an interesting split due to it being both an active community for retirees and a buzzing college town at the same time.

According to Timothy Allen, Fort Collins’s community and public involvement director, the rankings are a true reflection of the city.

“They are a testament to the leaders of the city and its creative energy,” Allen said.

Besides having leaders that value all segments of the community — including the younger and older populations — the city also has built a reputation for itself as a successful and responsible community, according to Allen.

“One thing that Fort Collins is becoming known for is the place for best businesses and careers,” Allen said. “Fort Collins is committed to its development and sustainably. We have a great social responsibility here.”

Another initiative through the city that has proved vital is the Keep Fort Collins Great initiative, a .85 percent sales tax that funds several critical services for the community.

“Caring for the environment, the economy and caring for each other is what leads to a healthy place to live and conduct business,” Allen said. “That’s what has been so impressive to me; the city council has a vision for the future and they commit to it.”

The Keep Fort Collins Great Association manages a $7 million budget that goes toward everything from the flowers planted in Old Town to the city’s Fourth of July activities.

“There are a lot of projects that depend on it,” Allen said of the tax. “They may not be the most flashy projects, but they are vital.”

The breakdown of how this budget is allocated is available on the city’s official website at www.fcgov.com/kfcg — something Allen calls “an open book of resources,” and really prides himself in the association’s transparency on the site.

With all the city does however, Allen believes that Fort Collins residents have a part to play.

“Fort Collins residents really believe in the city and want to keep it great.”

Collegian reporter Lexi Matula can be reached at news@collegian.com.