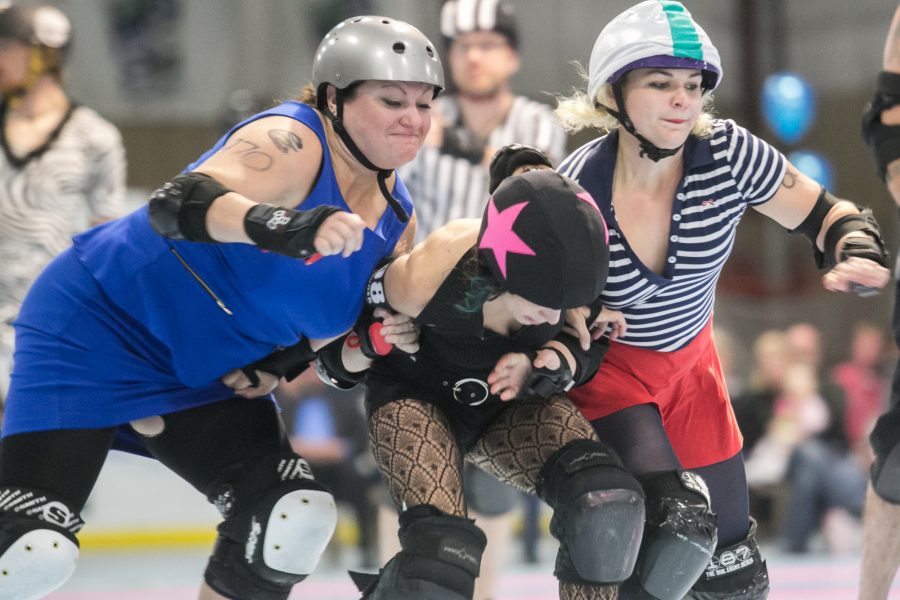 FoCo Girls Gone Derby were dressed to the nines this past Saturday at the Qdoba Events Center for the “Black and Blue Ball,” where Cinder Hellas and Psycho Sirens went head to head decked out in prom dresses and sequins galore.

FoCo Girls Gone Derby, the first northern Colorado derby league, has been around since 2006 and has been taking members, anywhere from lawyers to cat ladies.

Chloe Muir, a junior biology major, started with the FoCo Girls Gone Derby in Sept. of 2012 and by March, she was ‘Shirley Temper Tantrum’ in her first bout the track.

Muir, who stands at five-foot-four, says that the first response she gets is, “You play derby? You’re so tiny, though. I can’t see you being aggressive.”

Shirley Dosch, who came to see Dawn Rider, the “Husker Hussler,” loved the get-up of the night.

Shoshana Barbre, also known as “Sprocket Wench” on the track, said skating with these outfits is fun. Barbre, who works in the emergency room by day, is still in training and on her way to be on the league officially.

According to Barbre, the trainers start off the ‘fresh meat’ by training on the quad skates. Often, girls come in with no skating experience whatsoever.

After those skills are developed, girls move onto derby skills like how to take a hit, how to hit, and finally, actual derby scrimmage skills.

This is to ensure girls are comfortable before they move onto the next level. Barbre and Kafka said it is best to fall backwards if you are going to fall at all.

“It’s scary when they hurt themselves,” said Holly Ritzman, who attended the event Saturday in support of her sister-in-law.

Ritzman was not ready to join the team herself, but understood the drive.

“They can let loose a part of their personality they can’t show at home,” Ritzman said. “It’s kinda badass, but I can’t skate to save my life.”

Derby girls Kafka and Barbre said that anyone can play, no matter size, athletic background, or stage in life. Muir encourages all girls interested to attend the session and meet the girls.

“You’ll find out that anyone can do it — it doesn’t matter what kind of person you are. Everyone can be a derby girl,” Muir said.

Hailey Romero, a concessions worker, said the crowd who comes out for Roller Derby bouts are somewhat obscure.

“A certain group of people like this (sport) — very artsy people,” Romero said.

Both roller derby fans and skaters represent an eclectic fraction of the sports world.

“I have 54 girlfriends automatically,” Kafka said. “If you were stranded anywhere in the world, if there was a roller derby league around, you would have a place to stay.”

Roller derby is still underground and participants remain unpaid for the time being. Kafka would love to see the day everyone knows about it and can get paid.

“If curling is an Olympic sport, why isn’t derby?” Barbre said.