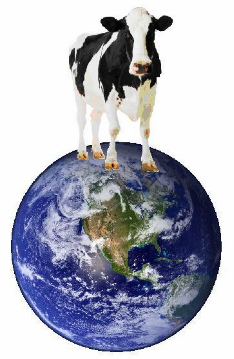 Imagine putting giant heat lamps in the sky. This heat puts more energy into the weather system. It is hard to determine how it will affect atmospheric conditions but one thing is certain, the temperature is rising.

The increase in temperature is what happens as carbon dioxide (CO2), a greenhouse gas, fills the atmosphere, according to Dr. Scott Denning, professor in atmospheric sciences.

Warmer air contains more moisture and, in trying to explain the recent flooding, the Western Water Assessment conducted a study with other organizations. They found that, “human-caused global warming… may have been responsible for a small increase in the water vapor in the moisture plumes that fed the Front Range event.”

According to Denning, rising temperatures affect rainfall, but not necessarily in a specific location.

“The basic idea is that the warmer the air is, the more moist it can be, and if the air has more moisture (water vapor) in it, more rain can fall when it rains,” said Dr. Russ Schumacher, professor of atmospheric sciences, in an email to the Collegian.

In the email, Schumacher adds that it is very difficult to attribute a particular event to climate change, because “extreme weather (droughts, floods, snowstorms, tornadoes, you name it) is happening almost all the time somewhere on the planet, and this has been true throughout history.”

One thing climate change undoubtedly affects, according to Denning, is fire.

“The forecast that climatologists have made about the Rockies — it’s going to be a lot hotter, several degrees within the next 50 years,” said Dr. Monique Rocca, associate professor in environmental science and sustainability. “Studies show very strong correlation with fire season length and warmer temperatures.”

“More winter precipitation is going to fall as rain instead of snow, and it won’t be stored on the landscape because it’ll run off,” Rocca said. “The fuel will dry out sooner and contribute to a longer fire season.”

With the increasing temperatures, another problem Colorado will run into soon is drought, according to Denning. He says that there is a discrepancy between the high amount of water allocated to agriculture versus that which is allocated to cities.

“As more water evaporates, there will be more and more of a conflict between 85 percent irrigation going to crops, and only 15 percent going to cities. Especially because the cities are still growing,” Denning said.

With regard to drought, Denning says that residents will need to renegotiate water distribution. Fire in any ecosystem, Rocca explains, is inevitable, and that means learning to live with them.

As for warming air, Denning explains why we may not have felt a noticeable increase yet.

“CO2 hasn’t increased very much yet. In the last 200 years, CO2 has gone up 35 percent and plan A is that we expect to increase it another 200 percent in your lifetime,” Denning said. “You ain’t seen nothing yet.”