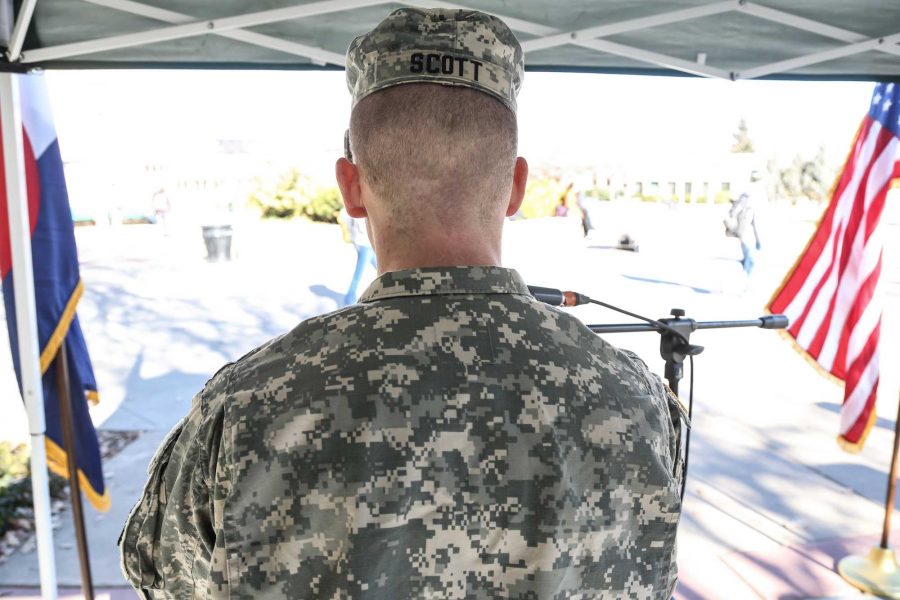 Senior philosophy major and member of the ROTC program Joel Scott reads the names of fallen soldiers outside of the Lory Student Center Monday afternoon. The yearly tradition of ROTC soldiers reading the names of servicemen and woman who made the ultimate sacrafice for the United States is an annual celebration of vetrans day and raises awareness for students on campus.

While most students will be sleeping the day before the university’s Border War game against Wyoming, CSU’s Army ROTC cadets will have been up and running almost 40 miles.

The cadets will be carrying the game ball for the Border War football game to the border of Colorado and Wyoming, where they will hand off the game ball to the University of Wyoming ROTC cadets.

“This year, we are starting at the stadium at the morning of the 18th of October and running the 39 miles up to the border where we will meet the UW cadets (and) hand the game ball over to them,” said Shane Celeen, a professor of military sciences.

From there, the UW cadets will keep running the game ball into their stadium because they are the home team this year.

“It is an annual tradition for us, in which most cadets participate in the run itself, along Highway 287, all the way up to the border,” Celeen said.

The Bronze Boot Run, a CSU Army ROTC tradition since 1967, is one of the longest standing traditions that is associated with Army ROTC and Ram football.

Along with the game ball run, the winner is presented with a bronze boot trophy from the Army ROTC as a part of the tradition. The winner gets to keep the trophy until the following year when the two teams play again.

“I think the greatest part is (the) rivalry and the intensity and the passion behind it,” said UW operations manager Robert Bowe. “You can tell that the cadets and fans from CSU and UW really take this seriously and have a lot of passion about it.”

According to Celeen, the tradition was started by a former CSU military sciences professor and his assistant.

The two decided to use an actual combat boot worn by Jeff Romero, another CSU professor, from the Vietnam War.

“I think it is great for the unit history,” Celeen said. “It exemplifies pride, in our university and a sense of camaraderie and partnership with the football program because it is a trophy that was begun by the Army ROTC here at CSU and we began the history, created it, and donated the trophy.”

Today, almost 170 cadets run for the two schools. Starting at 6 a.m. on Oct. 18, CSU cadets will run, in one mile segments, up to the Wyoming boarder.

Four hours later, upon meeting the UW cadets, both schools will have a ceremony, and then the UW cadets will run it into the War Memorial Stadium in Laramie.

“The ceremony at the border [is my favorite part],” said junior Cadet Jonathon Kummer. “It is cool to see both teams there with their mascots and all the ROTC guys coming together around one thing, even though it is just a football game. It kind of helps bring us all together.”

For Kummer, the bronze boot run is an opportunity to connect with his fellow cadets, both at CSU and UW.

“It is more fun than anything just to get out of the classroom and show your support for something greater than just ROTC or your team,” Kummer said.

Rams intend to try Bronze Boot on for size