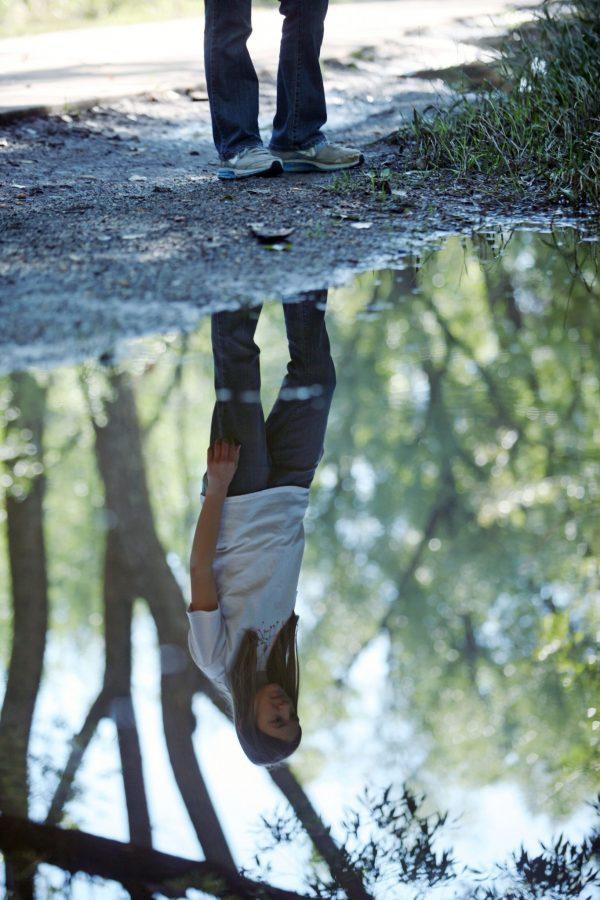 Rosemary Engles, 13, surveys the flood damage along the southern bank of the Poudre River Trail with her family Tuesday morning. The trail is still closed to the public due to the vast ammount of damage done to the trail, with layers of mudd, debris, and standing water.

After the blazing heat of The High Park Fire and the torrential rain of recent flooding, the health of the Poudre River and surrounding mountain areas was in danger.

Thankfully however, the river and burn scars appear to be recovering.

“Floods don’t damage rivers, they damage people and property,” said Gary Wockner, director of Save the Poudre, an organization working to restore the Poudre River.

City officials and volunteers have also reported that the water shed is not suffering from the rainfall.

During the week of Sept. 9, the Cache la Poudre River rose over 10 feet, flooding the banks, roadways and nearby trails. The canyons were completely closed off due to flooded roads.

The watershed, which is located in the High Park area, still held ash and detritus remnant from last summer’s fire. The rushing water pulled massive amounts of detritus into the water supply.

“Floods like this carry a lot of debris — mud and ash,” Wockner said. “It’s a very difficult situation for water suppliers like cities.”

Because of this, Fort Collins has not taken water from the Poudre since Sept. 6, instead relying on the supply in Horsetooth Reservoir to meet community demands.

In press releases, the City of Fort Collins also warned of E. coli, septic leaks and possible chemicals in the river.

Property damage and potable water quality may have been compromised, but there were positive aspects to the Poudre flooding.

“Floods can also be very healthy for river ecosystems,” Wockner said. “They nourish plants and species and nearby wetlands.”

The rainfall also benefitted Fort Collins by alleviating the dry conditions. Although the river had no way to save the excess water, rainfall added to the Horsetooth supply.

In the High Park burn area there was concern that the naked slopes would erode in the face of rainfall.

Restoration projects were interrupted by the heavy rainfall, which closed off mountain roads and effectively closed off the canyons.

“Unfortunately, one of the challenges (was) that we (weren’t) able to get back to work,” said Jennifer Kovecses, Restoration Coordinator for the Wildlands Restoration Volunteers.

When volunteers and the city were finally able to get back to the burn areas, the results were better than expected.

“Residents nearby were saying it’s not as bad as they were expecting,” Kovecses said. “I am pleased to say that all of the installations — erosion control structures — that we put in place before the floods have held and are functioning and are holding back sediment.”

Earlier in the summer, heavy rainfall caused ash and sediment to enter the Poudre, causing supply issues. Part of the mitigation — restoration of the slope — involved preventing erosion and part in rebuilding the local plant life.

City workers and volunteers were in the process of felling trees and lying down seeded mulch when the intense rainfall halted work.

All of the mulched areas showed sign of movement, but most remained intact according to Lisa Rosintoski, customer communications manager for the City of Fort Collins.

“Even the seeds we put down on the ground just before the rain started (were) still there and some have started sprouting,” Kovecses said.

The existing work kept erosion levels down and kept additional detritus out of the river.

“It looks like not only did the floods not damage our restoration treatments, but, in fact, (they) are continuing to work as hoped. They are holding back sediment and reducing erosion. That’s all good news for us,” Kovecses said.

Although excess sediment from the watershed was prevented, there is still a high amount of debris. The city will continue to hold off taking water from the Poudre.

“Fort Collins Utilities will not take any water from the Poudre River until we have inspected our raw water pipelines. We cannot inspect until the flow in the river goes down to a more normal flow for this time of the year,” Rosintoski wrote in an email to the Collegian.

The damage to homes, businesses and lives cannot be ignored, but for the Poudre and its watershed, flooding wasn’t a disaster.

“This is a natural process for rivers, it’s how they rejuvenate themselves,” Wockner said.

Collegian Senior Reporter Mariah Wenzel can be reached at letters@collegian.com.