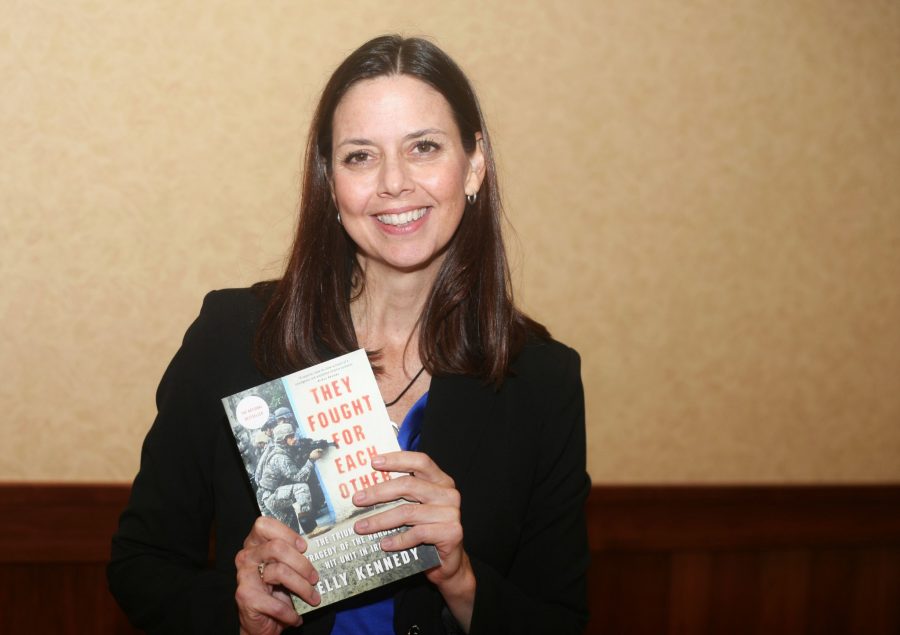 CSU Alum Kelly Kennedy takes a moment after her lecture Wednesday afternoon to pose with her book They Fought for Each Other. Kennedy is a journalist and a Desert Storm Veteran whose book describes the frontlines of Iraq through following the experience of the Charlie Company of the 26th Regiment.

From Colorado State University to the battlefield, Kelly Kennedy has shaped her life around documenting tragedies.

Upon arriving in Iraq, Kennedy entered a unit who had just witnessed the death of a nineteen-year-old solder, Ross McGinnis, who jumped on top of a grenade to save four of his comrades — an act that earned him the Medal of Honor.

“When we hear those Medal of Honor stories we miss (that) those four guys live with the fact one of their best buddies saved them… how (do) you live up to that?” Kennedy said.

Kennedy lived alongside the soldiers. She experienced the stories they would never tell their wives or closest friends. The PTSD they came back with, she carried home, too.

Kennedy witnessed a truck roll over a buried Improvised Explosive Device (IED) and had to walk the fine line between reporting on the war and sensationalizing the tragedies.

“One of the guys fell into the truck and his nose had burned off and his hands were burning off,” Kennedy said.

“She feels very strongly about reporting and brings her passion to everything she does,” said Catherine Walser, Kennedy’s co-worker from ArmyTimes. “She has many accomplishments because she is such a hard worker. When reporting, Kelly believes no one should ever be taken advantage of.”

Kelly Kennedy graduated from Colorado State University in 1997 with a BA in technical journalism. She then went on to receive her Master’s in journalism from University of Colorado where she published her thesis in ArmyTimes in February of 2007.

After graduating from CSU in 1997 with a BA in technical journalism and receiving her Masters in journalism from the University of Colorado, she was awarded the John B. Oakes Honorary Mention Award and was a finalist for the Michael Kelly Award. These accolades were awarded for a series she wrote called Blood Brothers –– a series on which she later based her novel, They Fought for Each Other, published in 2010.

Being a reporter and a woman forced her to adapt to a mostly male environment.

“They had porta-potties but it would get up to 109 degrees, so they’d cut the backs out of all the porta-potties… (I’m a) girl reporter so that was great,” Kennedy said.

“One man actually lock-and loaded (had her at gun point) at me because he was so angry the media were there,” Kennedy said. “The reason I know that is because he told me. We went drinking with them when we got back to Germany.”

Having been in the military before becoming a journalist gave Kennedy a slightly different perspective while reporting abroad and helped her gain respect from the soldiers.

“Because I served and the men knew I was a veteran, they knew I had been through a lot of the same ‘BS’ of the military,” Kennedy said.

Ironically, after covering PTSD while she was embedded, she came home with the symptoms and had to be in therapy after she started drinking too much.

Kennedy made the transition to working as Health Policy Reporter for USA Today after deciding she needed to be healthy and do something new.

“Some people sort of become addicted to this kind of reporting — its a kind of a rush,” Kennedy said.

“If you don’t love it, don’t do it,” Kennedy said about being a journalist. “It’s a lot of work and not a lot of money. Every single day can be different and you can have a great time and see interesting things that you would never see in a million years otherwise –– I don’t know if there is a better opportunity than that.”