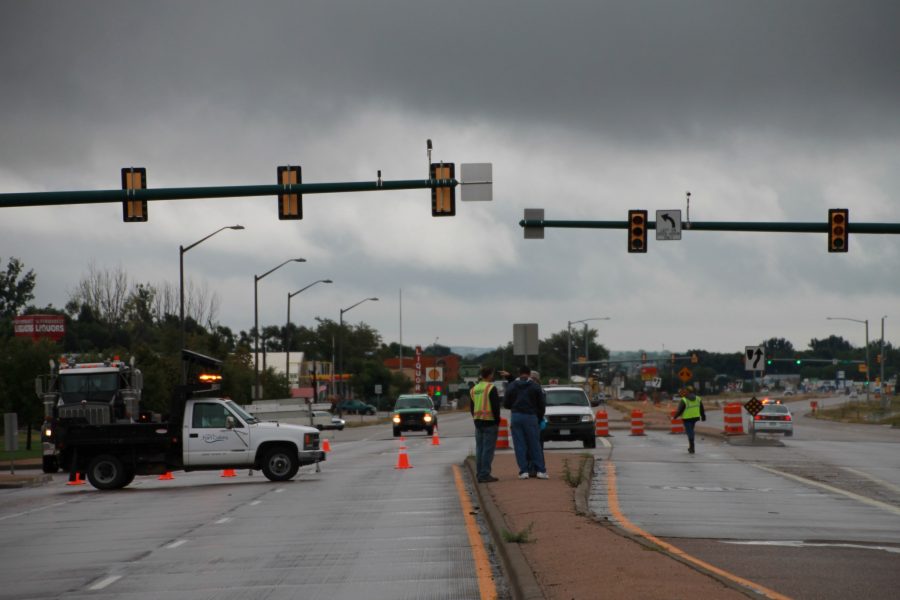 Despite various road closures throughout the day, Old Town acted as a hub for CSU students and Fort Collins residents to gather.

Normal spring runoff for the Poudre River is 4,000 cubic feet of water per minute, according to Atteberry. The river overflowed its banks Friday morning – its highest point reaching 10,200 cubic feet per minute.

Bridges north and east of Old Town were shut down along with various roads where the Poudre River overflowed. A lack of access to some bridges limited movement and contributed to a congested traffic flow.

Despite the road closures, many shops in Old Town remained open Friday, including Mary’s Mountain Cookies on College Ave.

Amy Bonvallet, a cashier and baker at the shop, said that it was important to the owner to keep the store open and have daily life continue.

Bonvallet recalled one customer who came in after being evacuated.

“She was like ‘I’m happy to be able to come in here and you guys are open for me … I can eat my guilty cookies and feel a little bit better about the day,’” Bonvallet said. “From that standpoint it’s just kind of nice to have a place that people can go.”

Bonvallet said coming into work was a welcome distraction from worrying about her aunt and uncle who were evacuated from Boulder.

“It’s kind of nice to have that regularity and be able to come in and have cookies. Cookies make everyone feel better,” Bonvallet said.

Although business was less than normal in Old Town, the amount of people out and about surprised Kayleigh Bauer, a cashier at Old Town Spice Shop.

“Only a dozen people have come in today, which is super, super slow for us,” Bauer said. “But, I didn’t expect anybody to come in.”

According to Atteberry, the city isn’t shutting down and Old Town’s open for business.

While Fort Collins residents welcomed a reprieve from the rain, Atteberry cautions that the sunny skies can be deceiving. People should still remain cautious near the water but not let the flooding hinder their spirits.

Collegian Editors can be reached at news@collegian.com.