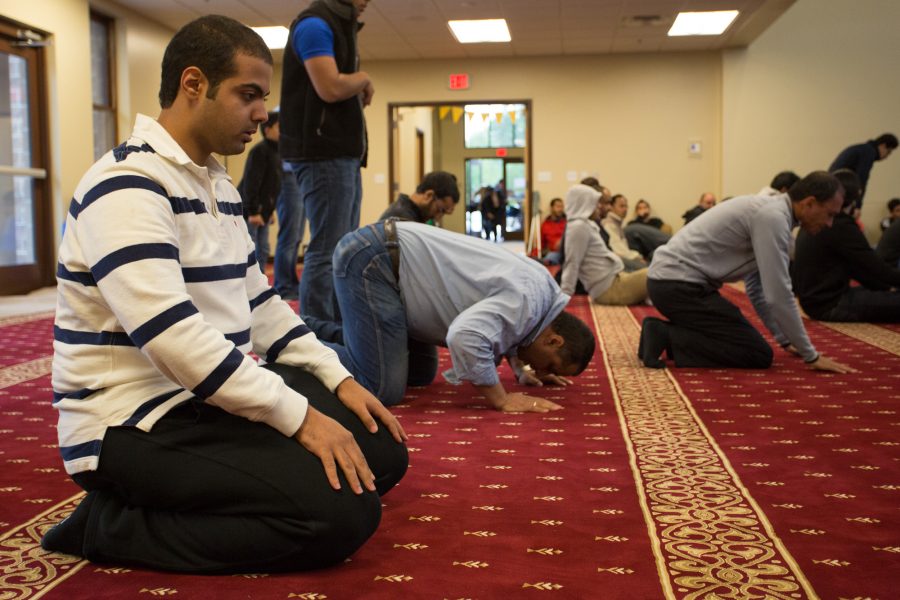 A man stops for prayer with a group of Muslims during the innagural service at the Islamic Center of Fort Collins.

A mosque nestled on Lake Street between two churches, a Christian school, apartments and homes. A small crescent moon and star reach upwards at the tallest point of the building while student traffic hurries by on the road below.

It is quiet inside. The rooms are simple and shoes are not allowed on the ornate carpets. Whispers are spoken in a mixture of Arab and English and every Friday, the call to prayer can be heard echoing through the vaulted ceilings.

Since the early 1960s, Muslim community members dreamed of having a new mosque in Fort Collins — a building custom-made for prayer and education.

On Sept. 27, 2013 the masjid (mosque) held its first prayer service. Although not the official opening, it was the first time the community was invited to a Friday prayer.

“We bought this land in 1993,” said Moin Siddiqui, a CSU professor of statistics and chairman of the New Masjid Committee. “It would have been good to build it then, but we were poor. We were always poor.”

The Islamic Center, which has so far cost about $3.5 million dollars, was funded by donations from across the nation, most coming from the Fort Collins community itself. Utilities such as plumbing have been donated to the center as well.

The old center was acquired in 1980 and has since fallen into disrepair. The new, larger center is intended to provide for the growing community of Muslims in Fort Collins.

“We thank God that our community has been very generous,” Siddiqui said. “We had much goodwill from our neighbors.”

Construction began in March 2011, according to Salah Abdel-Ghany, the fundraising committee chairman and a professor in the biology department at CSU.

The Mosque features Turkish architecture and, at capacity, should hold about 2,000 people for prayer services.

“We still have a ways to go,” said Kadija Walda, a community member.

The hope is to finish the basement and turn it into a temporary Arabic school and hopefully add a gymnasium.

The Islamic Center has tentatively planned for an official opening in November or December and has extended an invitation to Colorado Gov. John Hickenlooper.

With members from numerous countries in the Middle East, the new center drew in approximately 400 people for the first prayer, Abdel-Ghany said.

The building will host youth groups, babysitting for infants and small children during jummah, and educational classes as progress continues.

CSU’s Muslim Student Alliance (MSA) will also use the building for meetings and celebrations. The MSA is hosting a dinner at the new masjid for the upcoming holiday of Eid.

“It’s opening the doors for opportunity,” said Israa Eldeiry, a freshman intra-university student and member of the MSA.

The mosque can also provide connections for younger members of the community through weekly youth groups.

Born in Egypt, Hadeel Abdel-Ghany, Salah’s daughter, has worn the traditional scarf for four years and is one of a small number of traditional Muslims in Poudre High School. She attends a Friday youth group, managed by Eldeiry, with a group of teenagers closer to her age.

“At the old mosque we didn’t even have a room,” Eldeiry said. “A lot of girls didn’t want to go. Before, (when I attended groups) I was never looking forward to the classes. It was hard to get the girls together, but we’re a priority now.”

The community, Muslim and non-Muslim, has been very supportive. One Saudi Arabian student donated about $40,000 dollars before returning home to the Middle East, according to Eldeiry.

“I feel like people’s hearts are more open to helping out after seeing their efforts,” Eldeiry said. “Even the Fort Collins community, if not with money, they’re supporting us with words and everyone is so excited to hear about it and see it.”

“Muslims are supposed to get together and establish a network of support,” said Elizabeth Siddiqui, wife of Moin Siddiqui.

The Siddiquis are one of the oldest Muslim couples in the community and have seen it grow since the 60s. At one point, she recalled that prayers were held on a sheep farm on the outskirts of Fort Collins.

“We moved here in ’64 and it was a very small community,” Elizabeth Siddiqui said. “Growth has been slow and steady.”

“Knowing that people actually care makes it so much easier on us. The community is standing by us,” Eldeiry said.

Jummah is a Friday prayer service led by an Imam, comparable to Sunday service for Christians. The prayer is required for men and optional for women, according to Hadeel. It is held twice on Fridays, to allow students more options to attend.

Shoes are removed and left at the entrance, a circular set of faucets is ready for washing of hands, feet and faces to cleanse before prayer.

The traditional greeting of “As-salamu alaikum,” or “Peace be with you,” is returned with “Wa alaikum assalaam,” meaning “And unto you be peace,” according to Hadeel.

During prayer, the men and women are separated — an ancient practice for many mosques.

“The reason is because we bend down and don’t want our butts in the men’s faces,” Walda said.

It is not a sign of inequality, but of respect, according to Walda.

Here, women and children have the upstairs balcony area and men are below. Dark glass provides a transparent wall that allows the women to observe the lower level.

There is no furniture in the prayer hall, only a set of stairs for the prayer leader to speak from. Service is a mixture of Arabic and English, translated for those listening.

Attendees line up on the carpet, guided by a pattern that will give everyone room to press their foreheads to the floor.

Prayer lasts about a half hour.

Collegian Senior Reporter Mariah Wenzel can be reached at letters@collegian.com.