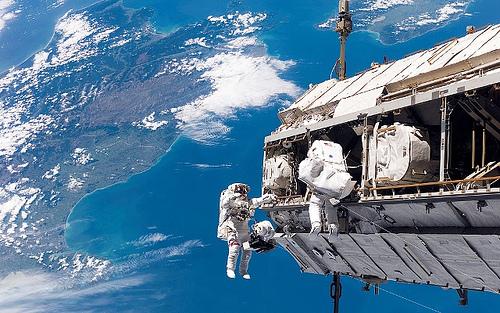 Corrections: The tagline on the front page photograph is incorrect. It refers to a lab on CSU’s campus. The photograph was actually captured from the NASA Brookhaven National Laboratory National Space Radiation Laboratory website. It depicts the NSRL beam room in Long Island, NY.  The Collegian regrets this error.

Clarifications: Paula Genik was referred to as “an employee under Dr. Weil’s grant.” We would like to clarify that Dr. Paula Genik is currently a CSU Assistant Professor and Recipient of a NASA Colorado Space Grant Consortium Faculty Seed Grant administered at CSU by Dr. Azer Yalin in Mechanical Engineering. We would also like to clarify that the tagline for the photo on page 10 should include “both radiation and circadian rhythms.”

Many children grow up dreaming of becoming astronauts, but only 540 people in the world have been to space, according to World Space Flight. This means that the other 7.1 billion people

had to figure out some other occupation.

Luckily for CSU students and faculty, it looks like they’re heading in the right direction.

“NASA research drives technology and affects everyone else,” said Mike Weil, a NASA funded researcher in the Department of Environmental and Radiological Health Sciences (ERHS) at CSU.

The National Aeronautics and Space Administration (NASA) is a government program started in 1958 for national defense. Since then, most people associate NASA with the moon landing or robots but chances are, NASA has affected your life in ways you are not aware of.

“If you’re part of that group of people that thinks the future of mankind lies in our ability to become an interplanetary species, than this is certainly extremely important stuff that we’re doing,” says Weil.

While NASA has one eye on space, it also keeps another on the ground. To do that, they launched the Landsat satellite program in 1972.

Landsat was put up “in direct response to a request from the scientific community in and outside the government to be able to monitor where the earth’s resources were — where are our forests, where is our water?” Dr. Stephen Leisz said.

Leisz explains the satellite was put up purely as a scientific endeavor, but has been used a lot by the private sector since then.

Leisz says of Landsat, “It’s all because of NASA pioneering this stuff. It’s a small public investment, opening it up and showing the utility of it. There was no private company that was going to put Landsat up there.”

Leisz says that NASA’s goal behind Landsat is to see how the earth system is changing, so that we can help policy makers make decisions.

“Looking at assessing the biologic productivity of what’s on the earth’s surface — that’s important if we’re going to support over 9 billion people,” Leisz said.

“We’re looking at past successes and failures to learn from this so we can use the things that we’ve learned for modern policy makers and land use,” Fisher said. “What we’re doing is really futurism.”

While NASA grants projects must be relative to NASA, their main interest is on funding the best science possible, according to Weil.

The high energy radiation that Weil studies, the same radiation astronauts experience in space, can be used to treat certain cancers.

Weil, currently researching the effects of ionizing radiation, was originally interested in genetics and worked at the MD Anderson Cancer Center. While there, he studied the effects of radiation on cancer.

Up to about half of all cancer patients will receive radiation therapies, according to Weil.

“The cumulative level of radiation that you receive from some diagnostic tests we now know is sufficient to cause certain cancers in small numbers of individuals,” Weil said.

Weil says that part of the reason he applied for a NASA grant is that a lot of cancer institutes are not studying what he studies.

“The National Cancer Institute has focused their attention almost entirely on straight therapy, rather than on the secondary risks from that therapy,” Weil said.

Dr. Susan Bailey, a colleague of Weil, also works in ERHS under a NASA grant. She studies teleomere repair. Teleomeres are DNA markers thought to be associated with aging. According to Bailey, her research is applicable to everyone.

“Think about strapping yourself onto a rocket — it’s stressful,” Bailey said. “People who have underlying problems with teleomere repair, whether they’re sitting in the sun all day or going into space, they’re going to have problems.”

NASA, CSU and the world

“NASA doesn’t have the scientists available to do all this research and that’s where these programs come in,” Leisz said.

NASA grants are funding research at CSU and other research institutions around the country — from atmospheric and biospheric sciences, to archaeology, to veterinary medicine.

“The reality is, we’re tied into a world system,” Leisz said.

“NASA has a mandate — you have to provide an explanation as to why your project is beneficial to life on earth. These are taxpayer dollars, and they want to know there is an earth benefit,” said Dr. Paula Genik, an employee under Weil’s grant.

Even though NASA planted an American flag on the moon, their mission speaks to the international community.

Genik, a Canadian, highlighted the impact that NASA has made on her generation and the international community in general.

“Science helps us look at things and understand things, but the ability to touch people’s imaginations, to be able to dream and to ask, what’s beyond there? Just the ability to see, when the first pictures came back of earth from NASA, it was tear-jerking,” Genik said.