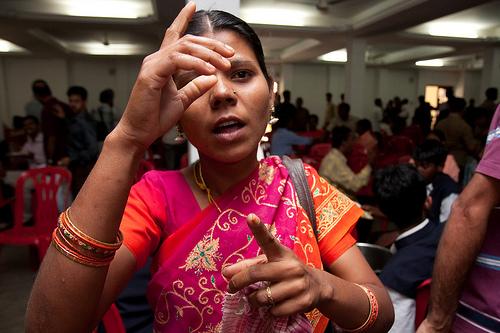 Imagine balancing school, friends, work and — on top of that — translating everything in your head during every lecture, every conversation and every assignment.

This is a reality for students such as Rocio Velez Pesante, a senior foreign languages & culture major, who did not speak English fluently when she first arrived at CSU.

“My first paper came back and it was all in red — of everything that I wrote wrong,” Pesante said. “That was my music appreciation class. It wasn’t even about grammar.”

When she came in as a freshman, Pesante said she was not aware of any translating services CSU offered.

“Even if they had them, I didn’t even know about it,” Pesante said.

According to Marisol Gomes, a Global Village lead program coordinator, resources are very limited for students who are still learning English.

“Most resources on campus are not catered to those who do not speak English,” said Marisol Gomes, a Global Village lead program coordinator.

Eventually Pesante found a community at El Centro, where she became an office coordinator. El Centro’s slogan is “home away from home” and Pesante said it was that for her.

Anne Kearney is another student that is constantly translating every interaction she has.

Deaf since birth, Kearney has learned to navigate her challenges with years of speech therapy and reading lips. She is in graduate school studying viticulture and enology — grape growing and wine making.

“It’s like opening and closing your ears all the time. You only get part of the information,” said DeDe Kliewer, coordinator of interpreting services at Resources for Disabled Students (RDS).

This semester, RDS has contracted ten professional sign language interpreters to provide assistance for seven full-time students who are balancing schedules and classes and lives just like every other student at CSU. For them, listening to lectures and taking notes is a more demanding task, according to Kliewer.

Kearney is currently a teaching assistant for Horticulture 102 and said it has been the most challenging task at CSU so far. She wants her students to be comfortable asking questions when they do not understand and usually explains the same thing two or three different ways, using her body to communicate.

“A lot of people are caught up in shock,” she said. “They don’t know how to talk to a deaf person.”

Kearney has had a note-taker with her in class since middle school.

“I know how to take notes, but having an interpreter helps me think about concepts,” she said. “Other people think in words. I think in pictures.”

Kearney said constantly translating the words she hears can be a struggle for her.

“(Deaf students) have a lot of extra work they have to do to catch up and put the pieces together,” Kliewer said.

International students who are studying at CSU and learning English for the first time experience similar challenges.

Yuki Nishimura came from Japan through the INTO program to study English academically.

She is in the process of acclimating to American culture, but said she feels welcomed by the friendly people at CSU.

“Campus is so big! Japan is so small,” Nishimura said, clutching her Mickey Mouse phone case. “Mickey! I love him very much.”

INTO student Shura Almaawali, from Oman, has finished her English studies and has since moved on to pursue her undergraduate degree in biomedical engineering.

“My dreams are here. I know that if I studied in Oman I would not do anything special,” Almaawali said.

Almaawali said she chose CSU because of its safety.

“The first thing I searched about was the safest place to be and I found that CSU was a safe place to live,” she said.

Almaawali is in an engineering class of all international students where Professor Bert Vermeulen is attentive to his English Language Learner (ELL) students.

“We’re teaching engineering. In engineering there are a lot of different concepts that one has to learn… what we are needing to do in this class is to try to teach engineering concepts using the more limited vocabulary,” Vermeulen said.

Almaawali said the class is helping her expand her vocabulary.

“We substitute visual information for what we can’t understand,” Bert Vermeulen said. “If I were to do my entire class as Charades, it would be much easier.”

Vermeulen, who learned English after moving to America when he was six, said he can empathize with students who are also learning English as their second language.

“What we’re finding in this class is that the students are just as capable and once as smart once they understand what we’re asking for,” Vermeulen said.

Collegian Reporter Hannah Hemperly can be reached at news@collegian.com.