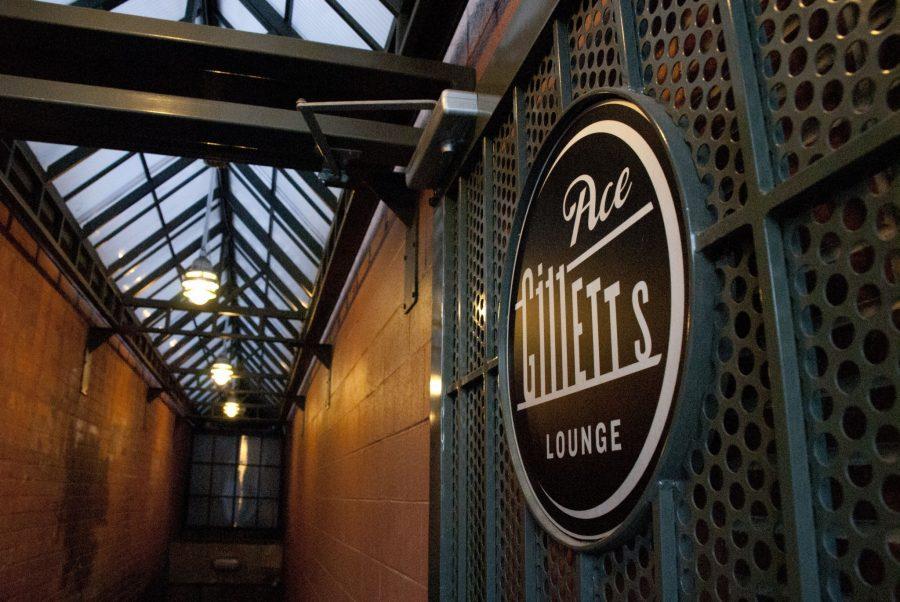 Bars, like Ace Gillet's have hidden options and amenities that are great for students to take part in. Photo by Anne-Marie Kottenstette

When reflecting on the bar and venue scene in Fort Collins, there are the obvious places that stand out.   Well-known venues such as the Aggie Theater and Hodi’s Half Note provide a wide variety of musical

talents year round and attract much of the concert-goers that live in the surrounding area.  College Avenue wanted to dig deeper beyond the popularity and find that perfect place where anyone can sit back, relax, listen to a small band and enjoy a cold one.

Avogadro’s Number (also known as Avo’s) is a hole-in-the-wall venue featuring a stage inside and outside on their spacious patio.  The inside area of Avo’s (which also has a bar area attached) provides visitors with a nostalgic, vintage feel that to many feels like a second home.  Old paintings spanning entire wall spaces depict trippy universal scenes to scenes of old jungle ruins found in the restaurant area.  One of the most intriguing parts about Avo’s, however, is their loyalty to variety.  Many of the musical genres showcased range from bluegrass, to jazz, funk, folk, and even salsa.  Most recently they have also started hosting a burlesque night with the Cupcake Cabaret Burlesque Revue.  With great daily bar and food deals, and nights dedicated to traditions such as Open Mic Night and reoccurring house bands, Avo’s is a wonderful place to connect with strangers who end up feeling like family and listen to music near to your heart.  Avo’s is located at 605 S. Mason Street and is open every day until 2 A.M.

They say beauty is only skin deep, but beyond that are life’s hidden treasures, and then there’s Ace Gillett’s.  As many of the bars are located on the street surface, Ace Gillett’s is nestled underground below the Armstrong Hotel.  While staying classy and casual, Gillett’s also stays intimate with low lighting and candles at each table, giving a romantic, sultry feel.  Providing a great escape from a typical Fort Collins bar or venue, Gillett’s is the place to grab a martini and get lost into the sweet sounds of jazz.  Regular house bands such as The Subterraneans grace the stage at Gillett’s multiple nights a week, often featuring a guest jazz musician to play with them.  Other bands featured throughout the week take audiences on mesmerizing journeys through other decades of music from the 40s, 50s, and 60s.  Gillett’s is perfect for the individual looking to broaden their musical horizon with timeless sounds and even better for that atypical evening with a good friend or significant other.   Ace Gillett’s is located at 239 South College Avenue and is open from 4 p.m. to 2 a.m. daily with music five times a week.

Take yourself back to the 80s, where retro couches and music went hand-in-hand with your parent’s garage.  Now take this image and mix it with flourishing beer taps and a dash of bicycle enthusiasm, and you’ve got yourself another hidden treasure, Crankenstein.  Located just north of the heart of Old Town, Crankenstein has made itself a staple player in the Fort Collins bar scene.  Complete with an array of beers, ciders, and even coffee not usually found in the usual bars (and a sweet “garage” type area for patrons to place their bikes!), Crankenstein caters to even the most serious atypical bar seeker.  However, it continues to get better.  Crankenstein’s open front area allows bands to mic up, or not, and provide mostly free performances.  Patrons can choose from a wide variety of couches and tables to settle in and enjoy a mellow night with a great sound and cold one.   From folk, grass, jazz, punk rock, or even a blend of multiple genres, Crankenstein’s rotating musical lineup is as unique as their overall atmosphere.  Crankenstein is open every day until about 1 a.m. on the weekends.

Along the Poudre Trail anyone can find a unique spot, but one part in particular leads you to the quaint Bar SS located in Laporte.  Although a few miles from Old Town, Bar SS offers a place for bicyclists, rafters, or those just looking to kick their feet up and enjoy the hometown feel.  With two music stages inside and outside, Bar SS is able to keep the music playing year round, six nights a week.  From a blend of Americana, folk, and rock n’ roll, there is a little something for all patrons to enjoy.  Bar SS also puts on an open mic night every Wednesday and offers $3 microbrews to patrons who ride their bikes out to them.  Another part of Bar SS’ success comes from it’s friendly dog and people atmosphere with a taste for the out-of-the-ordinary such as the  cheeseburger shot.  Intrigued? You’ll just have to hop on your bike and take a small adventure out west.  Bar SS is located at 3311 CR 45G Laporte, CO, just off the Poudre Trail, and is open from the early afternoon until 12 a.m.

Hidden along the Poudre Canyon, where a lack of cell phone service may freak some individuals out, lies one of the greatest gems in the Fort Collins area: the Mishawaka Amphitheater.  Founded in 1916 by a traveling musician who built the venue from the ground up, the Mishawaka has served as a musical and natural sanctuary for decades.  With a stage right along the river and the canyon at your back, it is quite hard to believe you’ve escaped 30 miles from Old Town.  During the summertime (and now winter with the indoor Spokesbuzz Lounge) the Mish features a wide variety of musical talent, ranging from electronica, hip hop, bluegrass, funk, country, and indie.  With several patios and an indoor bar and restaurant, the Mish comes alive and caters to all who come to visit the legendary structure.  The Mish is also a perfect spot to catch a band and head up to camping areas such as Pingree Park or Red Feather and enjoy the rest of what the Poudre Canyon has to offer.  Not sure about the drive?  For the past couple of years the Mish and owner Dani Grant have set up shuttle services that pick you up in town and bring you back after the show for a small cost.  Although the season is winding down for this year, it is never too late to venture up the canyon next summer and enjoy this beautiful venue.