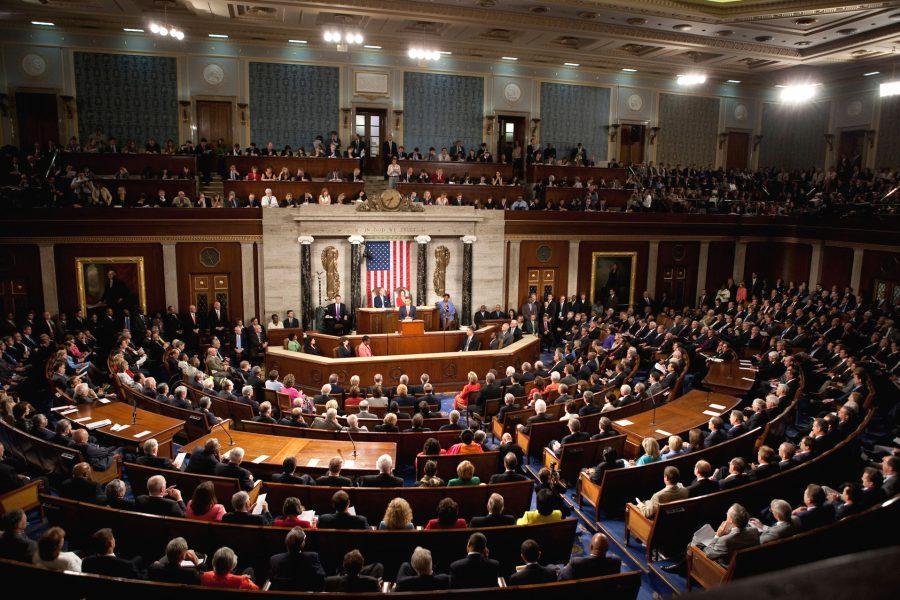 President Barack Obama delivers a health care address to a joint session of Congress at the United States Capitol in Washington, D.C., Sept. 9, 2009. (Official White House Photo by Lawrence Jackson) This official White House photograph is being made available only for publication by news organizations and/or for personal use printing by the subject(s) of the photograph. The photograph may not be manipulated in any way and may not be used in commercial or political materials, advertisements, emails, products, promotions that in any way suggests approval or endorsement of the President, the First Family, or the White House.

As of July 1, student loan interest rates across the nation doubled from 3.4 percent to 6.8 percent. The rate inflation comes amidst a recovery from one of America’s most impacting recessions.

The United States Congress debated on student interest rates for months prior to the hike, ultimately failing to find a middle ground between the left and right. With the July 1 deadline passing, the average student that takes out loans will pay roughly $2,600 more.

“It is really ridiculous that congress has allowed student rates to double. It is especially annoying because the differences between the democrat and republican plans are not that great,“  said Jared Polis, Colorado Congressman.

According to Polis, a proposal from President Obama would provide a 10-year bill that would keep student interest rates slightly above three percent, a proposal that lines up similarly with the republican proposal.

“The President’s proposal is very good. Its closer to the republicans than the democratic proposal,” Polis said. “There is a very bridgeable difference between President Obama’s plan and the house republican plan. Its just a matter of finding that common ground.”

Student loans do not immediately impact the wallets of students. The loan rates’ will take effect after students graduate from their institution.

According to the CSU Financial Aid office, roughly 9,000 CSU students borrow subsidized loans in order to attend the university.  The loan rate increase will cost students significantly more than those who took loans prior to July 1.

“If a student leaves having borrowed the full $23,000 for which they’re eligible, they will pay about $30 more per month at the new rate,” said Tom Biedscheid, CSU’s Director of Student Financial Services.

“Our concern is that the impact will be felt most by our lowest income students. They typically have to borrow more to pay for school so they end up paying more after graduation. We work hard to limit borrowing as much as possible. This rate hike makes our efforts to support responsible borrowing that is much more difficult,” Biedscheid said.

“Providing access to a college education is an essential tenet of our land-grant mission,” said Rick Miranda, CSU Provost and Executive Vice President. “Any action that Congress could take to reduce the financial hurdles a student faces in getting their college (degree) would be welcome.”

“Theres plenty of blame to go around,” Polis said. “It goes on democrats and republicans to work out their differences. They had plenty of time to do it and they could have just met at the halfway point of their 2 proposals, and rates wouldn’t have doubled.”

Students at CSU had mixed emotions on the news of loan rates doubling. While the financial impact will be felt by all who utilize loans, the impact they let it have on their college experience varied.

“(The increase) pretty much changes my plan of having everything paid off by age 30 – I’ll have to take out a loan this year under the new rate,” said Natalie Hansen, a graduate student at CSU, in a tweet to the Collegian.

Others realized the loan rate hike would impact them no matter what.

“(I) still need the loan, still have to take it. Just a few thousand more dollars will be gone down the drain,” said Res Stecker, a Senior International Studies major, in a tweet to the Collegian.

CSU has reached out to Colorado congressional representatives in hope of bringing a sense of urgency to the topic. With rates set on the national level, universities nationally have little power in relieving students of more financial debt.

“Since the increase loan cost does not occur until after students leave CSU, there is nothing (CSU) can do now,” Biedscheid said.

Until a new bill is proposed and approved through Congress, rates will remain at 6.8 percent. The negotiations and debate in Washington D.C. have dissolved temporarily. However, according to Polis, a sense of necessity for lower rates will ultimately revive the discussion.

“I think congress needs to hear from students and their families that this is completely unacceptable. It needs that urgency to take action. Action would provide a logical compromise that would have rates around 3 to 3.5 percent,” Polis said.

Content Producer Dillon Thomas can be reached at news@collegian.com