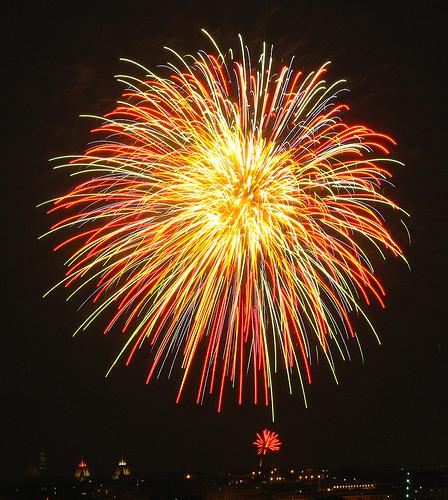 It’s that time of year again – a time when people sit down with family and friends to celebrate America and the freedoms that we enjoy. The day is filled with a traditional American cookout for most and an evening of fireworks. However, there is one tradition that most won’t be able to enjoy this year — the tradition of the backyard firework.

According to the city of Fort Collins, on Independence Day there are more fires in the United States than on any other day of the year and fireworks account for two out of five of those fires, more than any other cause of fire. In 2010 alone, fireworks caused an estimated 15,500 reported fires with eight deaths, 60 injuries and $36 million in property damage.

So before you go and drive to Wyoming make sure that you’re aware of where there are firework bans. Currently the City of Fort Collins and Larimer County have bans in place. These bans include all fireworks ranging from sparklers and snakes to larger ones. In Fort Collins it is illegal to sell, possess, or use fireworks in the city.

This ban is not only to protect the natural areas from yet another fire this year, but to help ensure the safety of the residents of Fort Collins. The highest risk of injury with the use of fireworks is in children ages 5 to 14 at more than double the risk of the general population. Part of the reason behind this statistic is the sparkler, which burns anywhere from 1800 degrees Fahrenheit to 3000 Fahrenheit. At this temperature – which is enough to melt some metals – most parents don’t realize just how dangerous a stray spark from those pretty sparklers can be.

This is one of the many reasons the City of Fort Collins has decided to ban all fireworks. If you’re caught using them in town you can face a fine up to $1,000, not to mention the other potential issues you may run into such as noise violations and possible injuries.

However there are plenty of options here in town to go see fireworks. City Park puts on its Fourth of July celebration which starts as early as 8 a.m. with the FireKracker 5K followed by the July 4 Parade at 9:30 a.m., which is a new tradition this year. In the evening there will be live music starting at 4:15 at City Park. The evenings fireworks are scheduled for approximately 9:35 p.m.

If you can’t make it to the park for some reason there is a free shuttle service being provided by the city. Busses leave starting at 5:30 p.m. and shuttle back and forth until 9:10 p.m. from the Downtown Transit Center and the CSU Moby Arena parking lot. After the conclusion of the firework show transport shuttles will resume to return spectators home.

Editor in chief Darin Hinman can be reached at news@collegian.com.