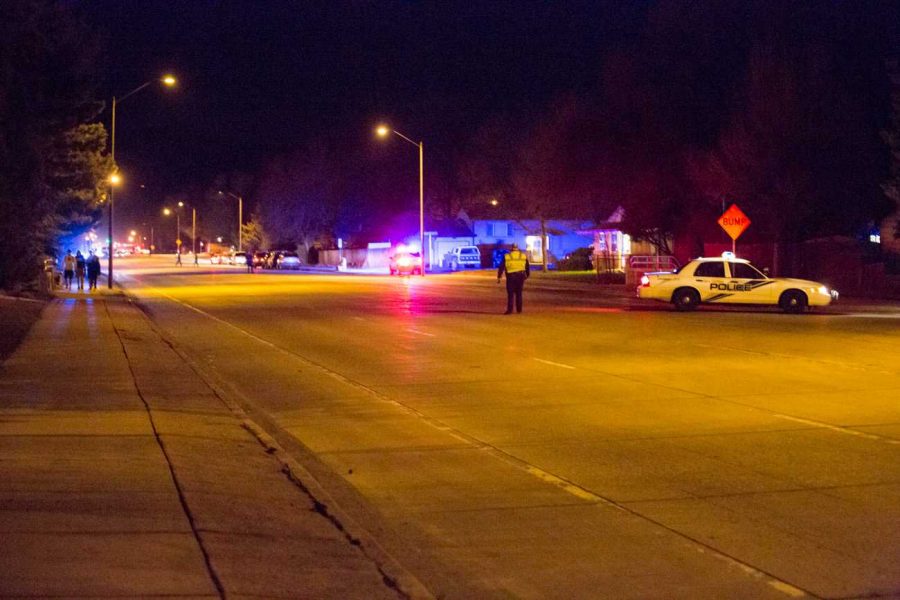 Police cars line the street after police broke up a block party near Prospect Road. Inciting a riot is a class one misdemeanor, which can lead to jail time.

By Corrie Sahling and Mariah Wenzel

Fifteen people, eight of them CSU students, have been charged in the aftermath of an April block party that evolved into a riot. The investigation progressed when Darin Hinman gave the police photos after reading the police department’s request for information.

Hinman, a 29-year-old CSU student, was an engineering major and KCSU employee at the time of the riot. He began taking photos after seeing police cars and realizing something interesting was going on, Hinman said.

Hinman left when things began to get more violent at the party. He said he was not present when police deployed tear gas to break up the riot.

“It got out of hand really quick. There were guys on top of cars, there were guys setting off fireworks in the middle of crowds, there was chanting,” Hinman said.

Hinman called an editor at the Collegian to offer the tip that the party was growing, and offered a few of his photos for the newspaper. Larry Steward, Student Media president, said that as an employee of KCSU, offering user-generated content to the Collegian does not make Hinman a Collegian staff member.

According to Hinman, when he returned home, he got online to find out what happened and discovered that the police department was asking for help finding who had started the riot. Hinman, who has a background in the military, felt that it was his duty to help the police.

“I was trying to do the right thing,” Hinman said. “I wanted to be a good resident of Fort Collins.”

CSU Media Ethics and Issues professor Patrick Plaisance said that as a citizen, it is our duty to report what we see, especially when those things are wrong or include criminal activity. However, as a journalist, that duty needs to be separated because helping other organizations can be perceived as a reporting conflict in the future.

At the time, Hinman had no training in media ethics, which generally separates media coverage and personal involvement in police matters. Generally, photos and video are subpoenaed by police before they are used, but Hinman chose to comply.

“I challenge anyone to put themselves in that situation. No one deserves to have (a riot) and that damage,” Hinman said.

KCSU’s training in the past has not been as rigorous as Collegian training regarding journalistic methods, practices and ethics, according to Steward. He said this is because of the different reporting styles required by newspapers and radio.

“KCSU, like most radio stations, has done a more documentary-style of reporting rather than hard news,” Steward wrote in an e-mail to the Collegian.

Hinman’s ethical choices following the investigation have been brought into question. However, according to Hinman, he was not acting as a journalist that night.

Journalists must be concerned with their independence from all institutions at all times, according to Plaisance. He said that the only way that journalism can fully serve the public is by assuming a watchdog role for institutions of power in the community, especially for law enforcement.

Hinman also asked the editor at the Collegian to pull the photos he had previously given the paper.

“I tried not to blur that line between civic duty and journalism,” Hinman said.

“I don’t want to call anything wrong or right here; student media is a laboratory,” Plaisance said. “You are here to learn anyway. This is a good opportunity to learn about the role you take as student media and how that role should affect the way you act in public.”

Steward agreed that this situation can be used to improve student media as a whole.

“Recent events provide teachable moments for both students and professional staff that require a new approach. As news organizations have evolved from traditional platforms to increasing emphasis on digital media, the distinction between media types is far less relevant. We’re now providing all of our student journalists more comprehensive journalistic training, including ethics, regardless of the medium,” Steward wrote.

Hinman is currently the summer session Editor-in-Chief of the Rocky Mountain Collegian.

“Darin is EIC for the summer Collegian because he was chosen to represent KCSU for the Summer Media Team, which trains students from all parts of Student Media to put out the weekly newspaper and run the website,” wrote Mike Humphrey, Collegian adviser, in an email. “Over the summer, Darin has been trained in aspects of media ethics that he wasn’t trained in before, including the separation of journalists and the officials that they cover.”

Editor’s note: The coverage and editing of this story were handled by students who are not involved in the summer media team.

Senior Reporters Corrie Sahling and Mariah Wenzel can be reached at news@collegian.com.