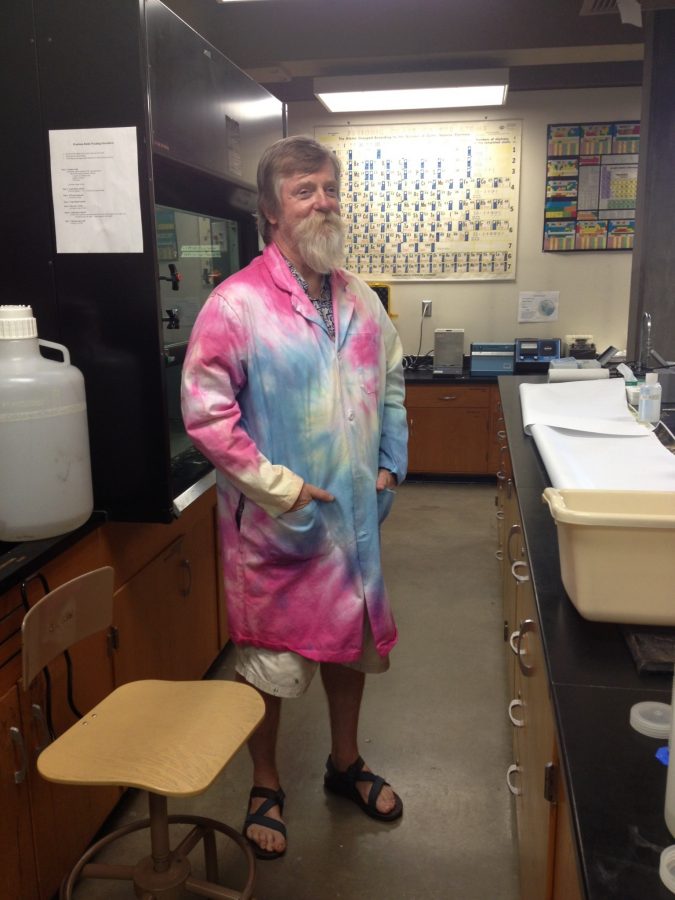 Stednick and his multi-colored coat recently appeared in the “Sustainability: Water” video series produced by NBC Learn in partnership with the National Science Foundation.

Stednick and Reed Maxwell of the Colorado School of Mines are featured in one of the seven videos that focuses on their research of the impact of bark beetle-killed trees on water quantity and quality in the Rocky Mountains.

“We’ve been looking at the effects of bark beetles on water resources for a few years,” Stednick said. “We thought (the effects of) beetles would be the same as timber harvesting but it wasn’t.”

Stednick, a professor of watershed science, has been teaching at CSU for 31 years after completing graduate work in hydrology, working in Alaska and teaching at a community college.

“Sustainability: Water” is an original seven-part collection consisting of stories explaining significant challenges to managing the water supply in selected regions and cities across the United States, according to a news release from NBC.

“We want people to understand the big and little things that affect water quality and quantity as it makes its way from rainfall to your tap,” wrote Susan Mason from NSF’s Division of External affairs in an email to the Collegian.

Stednick said their research was funded after they submitted a proposal to the NSF.

According to Mason, the topics were chosen from a suite of projects funded under the Water Sustainability and Climate initiative of the NSF, then narrowed based on impact, storytelling ability and the ability to convey principles of water sustainability and resilience.

“The purpose of the video (series) is community outreach to better inform the public of what’s happening; the whole series has to do with water,” Stednick said.

The videos are targeted mainly towards K-12 education, but a subset of them can be used on NBC news and affiliate stations, according to Stednick.

Stednick and Maxwell have found through their research, which is focused in north-central Colorado and southern Wyoming, that although there has been a lot of pine tree death from beetle kill, there have been very little effects on water yield and water quality.

However, the increase in decomposition products includes a variety of organic compounds, so they are now investigating the opportunity to transport natural metals. They are also studying chlorination, which can potentially create carcinogenic compounds — a problem for the municipalities which use water from these watersheds.

“We had a theory, tested it in the lab, confirmed it in the lab and now we’re taking it to the field. We’re now asking, ‘Is this a real concern or not?’” Stednick said.

NBC Learn producers filmed in the field with Stednick and the researchers for two and a half days, in areas such as Rocky Mountain National Park.

Stednick said the public should watch the video series because of the importance of water, especially in this area given drought scenarios and climate variability.

According to Senior Producer Mark Miano at NBC Learn, the series also includes reports on the Sierra Nevada snow pack, nutrient loading in Lake Erie, the diminishing Ogallala aquifer, polluted urban streams in Baltimore, and what it takes to bring water to the city of Los Angeles. There is also an overview story explaining the water cycle.

“Over the past four years, NBC Learn and the National Science Foundation have co-produced more than 150 original stories – about 13 hours of programming,” Miano wrote in an email to the Collegian.

Each video features an NSF-supported scientist from a diversity of fields, geographic locations and institutions explaining a specific challenge and how these challenges are affecting the water supply. Each episode is available cost-free to teachers, students and the public at NBCLearn.com/Water and NSF websites.